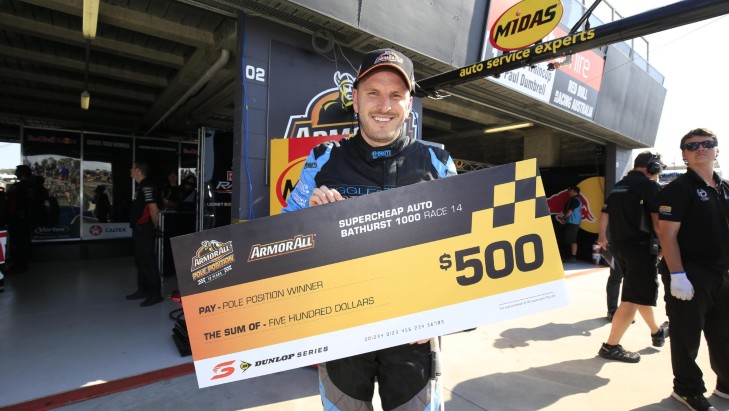 Paul Dumbrell has sealed ARMOR ALL Pole Position for the V8 Supercars Dunlop Series mini-enduro in an shortenedqualifying session at the Supercheap Auto Bathurst 1000.

The two-time Dunlop Series Champion recorded a 2min07.06 on only his fourth lap in the 40-minute session, edging Cameron Waters by 0.25secs.

Waters was on song to steal the first grid spot from Dumbrell on his final flyer, but a lock up on the entry to the elbow cost the series leader his chance at pole.

Todd Hazelwood will start the 41-lapper from fifth on the grid, ahead of Garry Jacobson, Macauley Jones, Aaren Russell and Josh Kean.

While Andrew Jones rounded out the top ten, the Brad Jones Racing pilot spectacularly crashed at the esses, deploying the second red flag of the session.

Jones lost the rear as he steered hiscar over the crest of Skyline, sending him into the tyre barriers.

He emerged from the car OK, but his Holden Commodore sustained heavy damage and spilt fluid all over the track.

"Maybe it looks worse than it was," said Andrew Jones.

"I feel for everyone at the team because we wanted pole and I thought we were close to that.

"I was pretty committed but I just lost the rear and I couldn't correct it, hopefully we can get out for tomorrow."

It was a substantial clean up for the officials that left only 10 minutes for the drivers to set in their fast laps.

The first red flag of the day was issued when Aaron McGill found himself bogged in the gravel trap in the session's opening few minutes.

The Dunlop Series now gears up for their 250 kilometre haul around Mount Panorama tomorrow at 2.00pm.