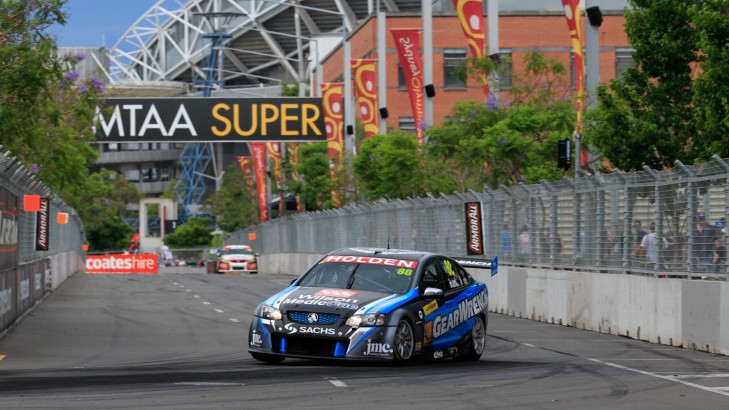 Paul Dumbrell has equalled Jonathon Webb's enduring Development Series record in a lights-to-flag win during a crash-marred Race One at the Sydney NRMA 500.

Dumbrell equalled Webb's 2009 record of four consecutive race wins in the series as he led Cam Waters to the chequered flag by 3.9secs, while Aaren Russell secured his second podium of the season by coming home in third place.

Despite being concerned for tyre life prior to the race start, the #88 entry proved its pace by setting thefastest lap that was within a tenth of Dumbrell's pole-winning lap.

"The car is really strong, it certainly didn't go off at the end there," Dumbrell told v8supercars.com.au.

"The safety car in the middle of the race allowed the tyres to have a couple of laps rest... and I think Cam probably just buttoned off and consolidated for second.

"But how good is this [the equalled record]! It'll be something to battle for tomorrow to top that win."

As the lights went green, rookie Shae Davies narrowly missed collision with a stalled Ash Walsh, while Kurt Kostecki and Josh Kean came together in a spectacular shunt that sent Kean into a slow-off-the-line and unsuspecting Brett Hobson.

The safety car was deployed after Kostecki was left stranded at the end of the straight, while Walsh's bad luck continued when he collected the wall at turn one and was dealt a pit lane penalty after a dive on Ant Pedersen at turn nine sent the fast kiwi into the tyre bundle.

Pedersen rejoined the mid-pack and was locked in a rife battle with Todd Hazelwood for 11th, but said the Eggleston Motorsport Commodore had the potential to be further up the field from where he finished in tenth.

"I was trying to pass a guy in front of us and sort of got boxed in and Hazelwood got me," he told v8supercars.com.au.

"Ash putting us in the fence put us back a bit, so we were racing guys that we were faster than, so it was just a matter of getting back into a rhythm following the fence incident and just picking them off when we could.

"The car was pretty good, it's just frustrating that it's another race where things didn't go our way, but that's okay, we'll go again tomorrow."

After starting from the rear of the grid, Hazelwood sacrificed his drive to 11th place when he swiped the wall at turn eight, ripping his right-front tyre to shreds and sustaining massive damage to the front splitter of the Tecalemit Falcon.

Hazelwood limped home a lap down to20th, while Chris Pither closed the margin to third place in the championship to 30 points by claiming fourth in today's race. Andre Heimgartner was fifth, while Andrew Jones, Taz Douglas, Paul Morris, Macauley Jones and Pedersen rounded out the top ten.

The incident between Walsh and Pedersen was emulated at turn eight, when Garry Jacobson came to the same fate as Walsh, serving a pit lane penalty after a misjudged dive on Brett Stewart sent them both into the tyre bundle at turn eight.

GRM-prodigy James Golding's rookie debut in the series was hindered after becoming unsettled on the kerb of turn 11, sending the Dragon Commodore into a spin.

At the close of today's race, Walsh holds on to second in the championship by a slim 12 points to Waters.

Qualifying for the Grand Finale race of the 2014 Dunlop Series Championship kicks off at 8.45am ADST.