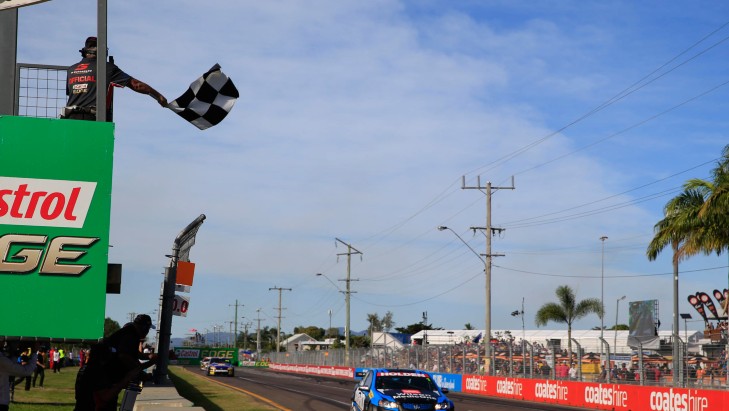 After recording fifth yesterday, the two-time series and Bathurst 1000 winner was confident he could challenge the young Prodrive-backed competitoron the Townsville streets and proved the goods today by 2.6 seconds after 21 laps.

The winproves the Eggleston driver is up to the fight, after rounding up pole sitter Chris Pither off the start and passing Waters at turn two for the race lead.

There was plenty of action in the opening stages of the race, with a multi-car incident on lap one at turn six taking out Matt Chahda, Kurt Kostecki and Garry Jacobsonand triggering the Safety Car.

Jesse Dixon was also involved and managed to fight on a lap down, though he had a spin later in the race.

Macauley Jones celebrated one year in the category here but ended the race by hitting the wall at turn five while running in the top 10 in his PAYCE-backed Commodore.

There were a number of battles for James Golding, whose Dragon ex-GRM Commodore was quick but smacked the wall on entry to the final turn. Fortunately he was able to continue racing and managed eighth.

Waters continues to lead the Championship, with a 145-point buffer and three rounds left to contest in 2015.

The next Dunlop Series event will be held at Queensland Raceway's Coates Hire Ipswich SuperSprint next month.

A V8 Supercars practice session will be staged only for additional drivers at Ipswich, so a number of Dunlop Series contenders will do double duties. Dumbrell, Waters, Pither, Le Brocq and Taz Douglas are confirmed co-drivers for the PIRTEK Enduro Cup, with Macauley Jones likely to step back into Dale Wood's Brad Jones Racing Commodore as he has throughout the season.