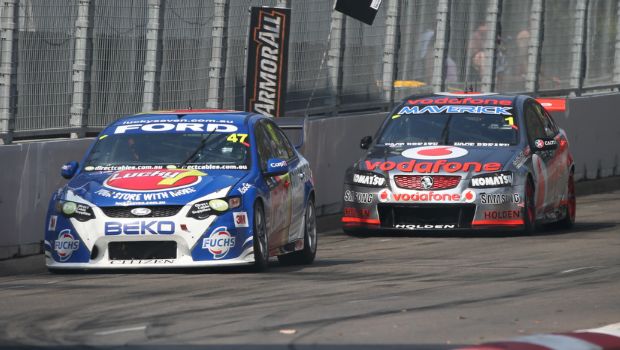 The privateer team last week took delivery of a pair of Stone Brothers Racing Falcon FGs, which were fresh from competing at Sydney Olympic Park.

Aaren Russell will pilot SBR FG05 next season, the last car built and raced by SBR. It was driven this season by Tim Slade to fifth in the V8 Supercars Championship as the #47 Lucky 7 Falcon and was the car Slade used to take his first career pole position at the Sydney Telstra 500.

The other car delivered was SBR FG01, the original FG Falcon built by the team for Alex Davison in 2009, which was also the car that carried Scott McLaughlin to the 2012 Dunlop Series title in Sydney. It will be raced next season by Michael Hector.

As part of the purchase, the three-time V8 Supercar Championship winning team will offer technical support.

Options for a third car for Drew Russell are currently being evaluated, though the team anticipates testing their new ‘Christmas presents’ for the first time in late January.

“We couldn’t be happier to have these two FGs from Stone Brothers Racing. It’s a team with a rich pedigree and all three of their cars finished inside the top eight of the V8 Supercar Championship, while Scott McLaughlin drove another to the Dunlop Series title.

“The series is getting more and more competitive each year, but this promises to be a really competitive package for Aaren and Michael to use. I know they’re both looking forward to getting out there and showing what they can do.

“We’re working on finalising a car for Drew, and hopeful of getting that locked in sooner rather than later, so we can get all three cars ready for the start of the 2013 season.”

The team has used ex-Brad Jones Racing Falcon BFs for the last few seasons with Drew and Aaren Russell finishing 11th and 15th respectively in this year’s Dunlop Series with rookie Hector finishing 19th in his maiden year in the series.