Brad Jones Racing is yet to diagnose the problem that cost Macauley Jones maiden Dunlop Super2 Series victories in Townsville.

Jones set the pace in Round 4 but his weekend unravelled with a pair of right-rear damper failures while leading.

The polesitter was forced to pit his DrillPro Commodore both days, Sunday's Turn 7 demise almost a carbon copy of Saturday's.

The cause is yet to be identified with the team's transporter and cars remaining in Queensland ahead of Supercars' Coates Hire Ipswich SuperSprint this weekend.

BJR fielded six Commodores in Townsville, three in the main game accompanied by three in Super2 for Jones, Jack Smith and Zane Goddard.

"We haven't actually gotten the car back to Albury to be able to pull it apart and dissect the issue, because the car went from Townsville straight to [Ipswich]," Jones told Supercars.com.

"It's the only time it's been an issue for us and only one car had the issue over the whole weekend, which is quite strange, so we definitely need to find out what was going wrong.

"We're not sure if it's a manufacturing problem, as we just haven't had the car back at the shop to be able to look at it.

"It could be a number of things; it could have just been wear and tear on the first one we had in it and it being a bit out of life or something.

"We monitor all of that and we don't think that was the issue, but I think something is binding up in the rear end and it has caused it to break.

"It is a street circuit, so it is hard on the gear and for some reason our car wasn't compensating very well with that." 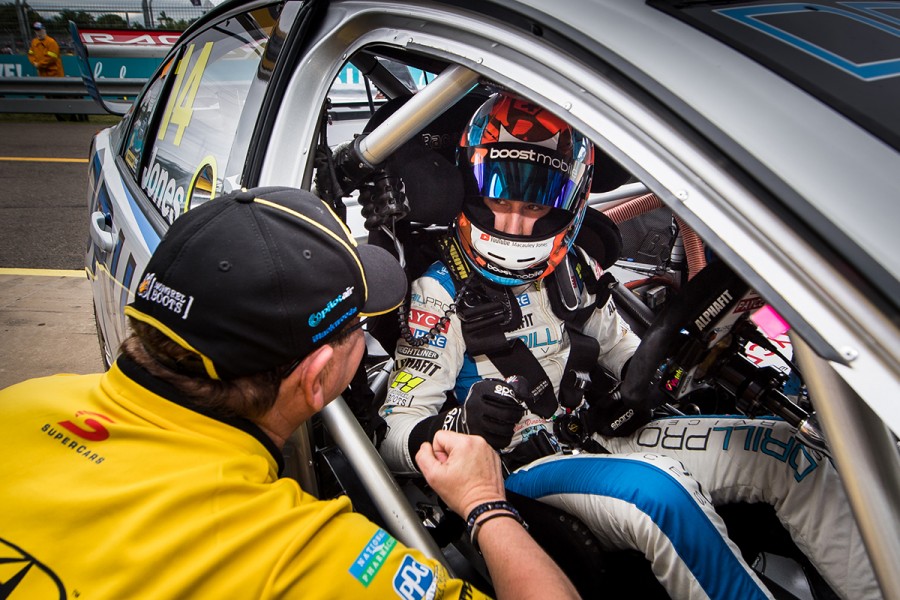 Although the 23-year-old left empty handed, Jones says "there's a lot to take away" from a troublesome weekend.

"Everything was going smoothly, the car and the set-up felt really good, it was very comfortable and I think it was a testament to the work we've put in lately," he added.

"Qualifying especially wasn't a strong suit for us so far this year and to get our first pole position was awesome. It's an area that we've been focusing on heavily and we've definitely made improvements on that.

"Although it was a disappointing end to the weekend, there's a lot to take away from it, we were in the position to win both races and that's definitely a positive."

In addition to his Super2 campaign, Jones will make a second Supercars wildcard appearance at Tailem Bend in August, and contest the PIRTEK Enduro Cup with Nick Percat.

"It's a brief hitout, but it's always good to get back in the car and the endurance season is coming up really quickly," said Jones.

"It's going to be completely different to what it was at Winton [in the wet].

"I work pretty closely with the BJR team and the engineers there, so I sort of know the package that they've got with the car and it's not too dissimilar to me."