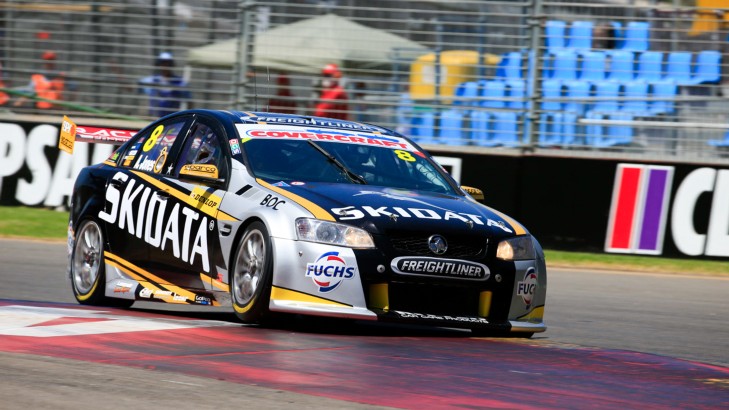 All three Brad Jones Racing V8 Supercar Dunlop Series machines will complete a valuable test day at Winton Motor Raceway today in a bid to bridge the gap to the Triple Eight and Prodrive Racing-supported cars in the field.

Andrew Jones, Macauley Jones and Josh Kean will complete valuable laps of the country-Victorian circuit today, testing new componentry before they descend on Barbagallo for the second round of the series in three weeks' time.

While their Clipsal campaign was hindered by a brake infringement that saw all three cars excluded from qualifying, the speed of the BJR Commodores prevailed with both Andrew Jones and Macauley Jones making their way back inside the top 14 after starting from the rear of the grid, however Kean recorded a DNF.

Andrew Jones told v8supercars.com.au the Albury-based squad will use today's test to sharpen their V8 Supercars Dunlop Series program so they can threaten the dominance of the teams affiliated with the powerhouses of V8 Supercars.

"Our Dunlop Series program is a pretty cool one to be involved in, with the development that is going on, it's pretty cool," Jones said.

"The Ford Performance Racing [now Prodrive Racing Australia] cars and the Triple Eight cars were the cars to beat in the V8 Supercars series when they all got handed over to Dunlop Series teams, so for us... to get close to those guys, like at Clipsal, is a pretty good feeling.

"Hopefully some of the stuff we try [today] will be good enough to be able to move us in the hunt where we can actually fight amongst Cameron Waters and Paul Dumbrell and get amongst that mix and have some good racing.

Today's test also poses as an opportunity for Kean to further adjust to his ex-Fabian Coulthard commodore since joining the Brad Jones Racing stable this season.

The 21-year-old showed his skills in the season-opener by recording the 8th quickest time in qualifying, before he was relegated to the rear of the grid for the team's brake breach. Despite crashing out in race one, the Adelaide-native made up 11 places to finish 16th in race two.

"When you look at Josh and where he is in relative terms, his racing experience is very limited - he pretty much has a year and a half, two years racing under his belt - but his raw ability in the car is very good," Jones told v8supercars.com.au.

"I think Josh in particular did a brilliant job in Adelaide. His pace in qualifying was good and his race pace was very good.

"So for him, it's about trying to help him understand our cars, what changes do what, to be able to speed up that process for him so when we go to a race meeting, we're able to give him what he wants as quickly as possible.