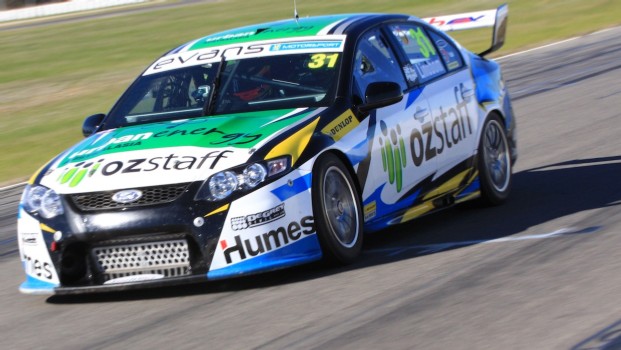 Clip thanks to Yahoo!7 Sunrise

Evans Motorsport Group team boss Josh Evans has confirmed that young female Formula Ford racer Chelsea Angelo will step up to the Dunlop V8 Supercar Series with the team in 2014.

The EMG team moved into the Dunlop Series this year following a takeover of Greg Murphy Racing and will look to add an extra car to its stable to accommodate Angelo's promotion next year.

Angelo tested the team's Dunlop Series entry at Winton on Tuesday and impressed with her pace and her ability to learn the intricacies of driving a large V8 – her only other race experience has been at the wheel of her Ozstaff-backed Mygale Formula Ford.

"Chelsea has been impressive since we started working with her early in 2012," Evans said.

"She has come on far quicker than most of us could have imagined, she's won a race in Formula Ford and she has never been out of the top five or six – her ability to learn is outstanding and we're sure she'll tackle this next challenge with the same level-headed attitude.

"We were already thinking about moving her into the Dunlop Series next year but the way she handled the test day, and the times that she managed to produce, made our mind up for us.

"As a team we've spoken about it, had discussions with her family and it's now full speed ahead for 2014.

"We'll immediately begin looking at securing another chassis for 2014 and our preference would be to add another FPR-built car to the team, but that will depend on what is available."

Angelo, who turned 17 earlier this month has shown tremendous pace during her short tenure in Formula Ford and her maturity has impressed many in the wider V8 Supercars paddock. She says she will maintain the same level-headed approach when she makes her V8 racing debut.

"I suppose one of my strengths is that I never get too emotional about my racing," Angelo said.

"I ride the ups and downs pretty well. I know I've got a lot to learn but am looking forward to the challenge.

"The team has been fantastic to work with ever since we did the first test in a Formula Ford and I'm really proud to be stepping up to the Dunlop Series with them next year."

Angelo managed to produce laps in the high one minute 25 second bracket during the test and her fastest lap was just three tenths of a second shy of the fastest race lap during the Dunlop Series round at Winton last year.

The Victorian teenager will spend the rest of this year competing in the remaining rounds of the Victorian Formula Ford Series and the Evans Motorsport Group will also schedule her some more seat time in the team's FG Falcon in preparation for her 2014 campaign.

06/05/2013
Stay In The Know
Sign up to the Virgin Australia Supercars Championship Newsletter
This website uses cookies to improve your user experience. By continuing, you will be providing your consent to our use of cookies.Ok