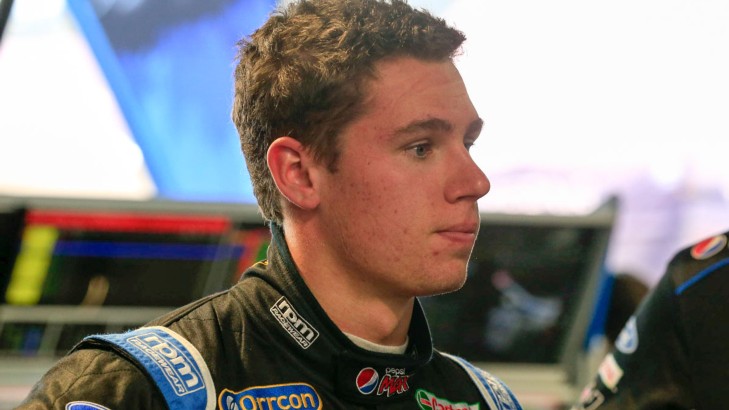 A contingent of V8 Supercars Dunlop Series young guns will step up to the V8 Supercars Championship this weekend, fulfilling co-driver duties at the first round of the PIRTEK Enduro Cup.

Cameron Waters, Jack Le Brocq, Macauley Jones, Chris Pither and Ant Pedersen have all been recruited to co-drive this endurance season - which kicks off this weekend at the Wilson Security Sandown 500 - after their impressive Dunlop Series campaigns this year.

Headlining the contingent of Dunlop Series stars is Prodrive Racing Australia prodigy and series leader Waters, who will partner Chaz Mostert in the #6 Pepsi Max Crew Falcon for the enduro cup.

With Mostert currently second in the V8 Supercars Championship standings, and 900 points on offer across the PIRTEK Enduro cup, Waters will carry Mostert's championship hopes through endurance season and help him defend his 2014 Supercheap Auto Bathurst 1000 crown.

"I'm really looking forward to going into the enduros with a genuine podium chance," he told v8supercars.com.au.

"There's definitely added pressure because you don't want to destroy Chaz's chances by doing something stupid. I'm there to do the job the team want me to do and if they tell me to drive faster I will, but I won't be taking any undue risks.

"I ultimately want to help Chaz challenge for the championship lead."

Both Le Brocq and Jones will make their championship debuts this weekend, with Le Brocq joining fellow rising star Ash Walsh in the #4 Erebus Motorsport V8 E63 AMG, while Jones will line-up with Dale Wood in the #21 GB Galvanizing Commodore.

While they won't compete in this weekend's endurance classic, Dunlop Series rising stars Aaren Russell and Renee Gracie will suit-up for endurance duties at the Supercheap Auto Bathurst 1000, piloting separate wildcard entries in the Great Race.

Fellow Dunlop Series competitors and veteran racers Paul Dumbrell and Andrew Jones will also step up to the championship for the enduros, taking up their regular seats at Red Bull Racing Australia and Team BOC respectively.

A former Dunlop Series Champion, Jones believes the extreme competitiveness of the category teaches young guns what to expect when they step up to co-drive in the championship.

"There's no better learning in any sport to be able to drive a car that is close to the one you'll be in come enduros as regularly as possible," he said.

"Most co-drivers will most likely start the race at two out of the three endurance events, and they'll have to get through the hectic first couple of laps incident free, and the Dunlop Series definitely provides that.

"You have the opportunity to do the start process, go through the heat of the battle in those first few laps, which is a big benefit."

After contesting the first four rounds of the 2015 Dunlop Series, Taz Douglas also gears up for co-driving duties this weekend alongside James Moffat in the #99 Nissan Altima.

The Dunlop Series regular withdrew from the category following Townsville to focus on his endurance campaign with Moffat, which proved successful in 2014 when the duo finished second at the Supercheap Auto Bathurst 1000.

The PIRTEK Enduro Cup kicks off this weekend at the Wilson Security Sandown 500 - click here for more information and ticketing options.