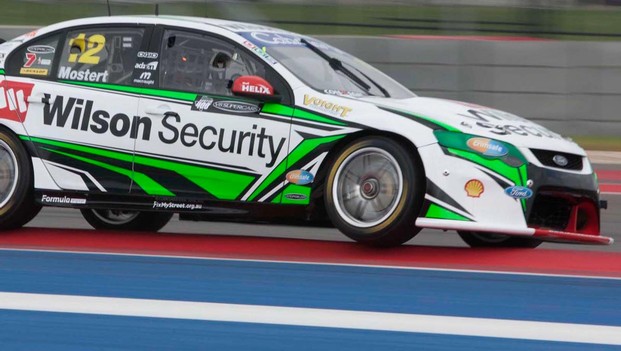 Dick Johnson Racing/Wilson Security Racing has embarked on a newlook driver line up for 2013, filling all four seats with some of the bestyoung talent in V8 Supercars.

After an impressive debut for the Wilson Security backed team inPerth, Chaz Mostert will be teamed in the #12 Falcon with Dale Wood (both pictured to the right of Johnson).

A seasoned Dunlop Series campaigner, Wood has the most Bathurststarts of any of the four DJR drivers this year and is a perfect partner forrookie Mostert.

“I have driven at Sandown and Bathurst for the last four yearsnow, but the chance to drive for DJR and to line up with Chaz is a greatopportunity,” Wood said.

Wood has also enjoyed support from Wilson Security in his ownDunlop Series program.

“The Wilson Security Team is clearly starting to show some greatform and I am sure that Chaz and I can really surprise a few people,” he said.

“There is no more famous team than Dick Johnson Racing when itcomes to Bathurst so I am really proud to be part of the 2013 line up.”

Blanchard is competing in his third Endurance series, includingthe Bathurst 1000, but it will be Walsh’s first start at the Sandown, Bathurstand Gold Coast races. He has competed at Sandown and Bathurst in Formula Fordand the Dunlop V8 Supercar series in recent years however.

“We have worked very hard this year to get on the radar of themain game teams – I am rapt to be making my enduro debut with a team likeDick Johnson Racing,” Walsh said.

“I believed my Dunlop Series form would have a bearing on thisseason so it has now come together really well. I am very grateful to Dick andthe whole DJR Wilson Security team for having faith in me. Tim and I get onwell so I am very confident we can really do a good job for the team.”

Announcing the line up from the DJR Home Base in Queensland,team principal Dick Johnson said, “This the first time we have ever gone to thelong distance races with a bunch of young guys in both cars.

“We have had some great names at DJR over many years includingJB (John Bowe), Paul Radisich, Gricey (Alan Grice) and Alan Jones. But the teamis entering a new phase and these guys are the future of the sport.

“There is plenty of pressure on them for sure, but we will guidethem through all that and see how they perform. As a team owner I am reallylooking forward to it.”

Following on from Steve Johnson’s announcement to step down fromfull time V8 Supercar competition, and subsequently signing on as a co-driverwith Erebus Motorsport V8 this year, Dick commented: “We sat down quite early inthe season with Steve and gave him a clear run on making his decision.

“I know he was keen to have a crack at Bathurst as a driver onlyand that meant he looked at signing with another team. We set his and ourdeadlines in place to ensure everyone’s interests were covered. We agreed as agroup to sign Dale and Ash to the DJR line up and Steve then finalised hisarrangements.

“We have the two best runners in the Dunlop Series in our carsand recent history shows these guys do a very good job.”

“The focus DJR has taken this year on developing young talenthas been reinforced by taking the three best Dunlop Series drivers and givingthem an opportunity. With Chaz stepping up, Dale and Ash are the other twostand-outs this year.

“This strategy aligns with Wilson Security as we have beeninstrumental in developing drivers such as Dale Wood to take the next step intheir career.”

The new signings to the team will be on track in the co-driversession at the Sucrogen Townsville 400 from July 5-7.

Ash Walsh  ›
2013 Wilson Security Sandown 500  ›
2013 Supercheap Auto Bathurst 1000  ›
2013 Armor All Gold Coast 600  ›
Stay In The Know
Sign up to the Virgin Australia Supercars Championship Newsletter
This website uses cookies to improve your user experience. By continuing, you will be providing your consent to our use of cookies.Ok