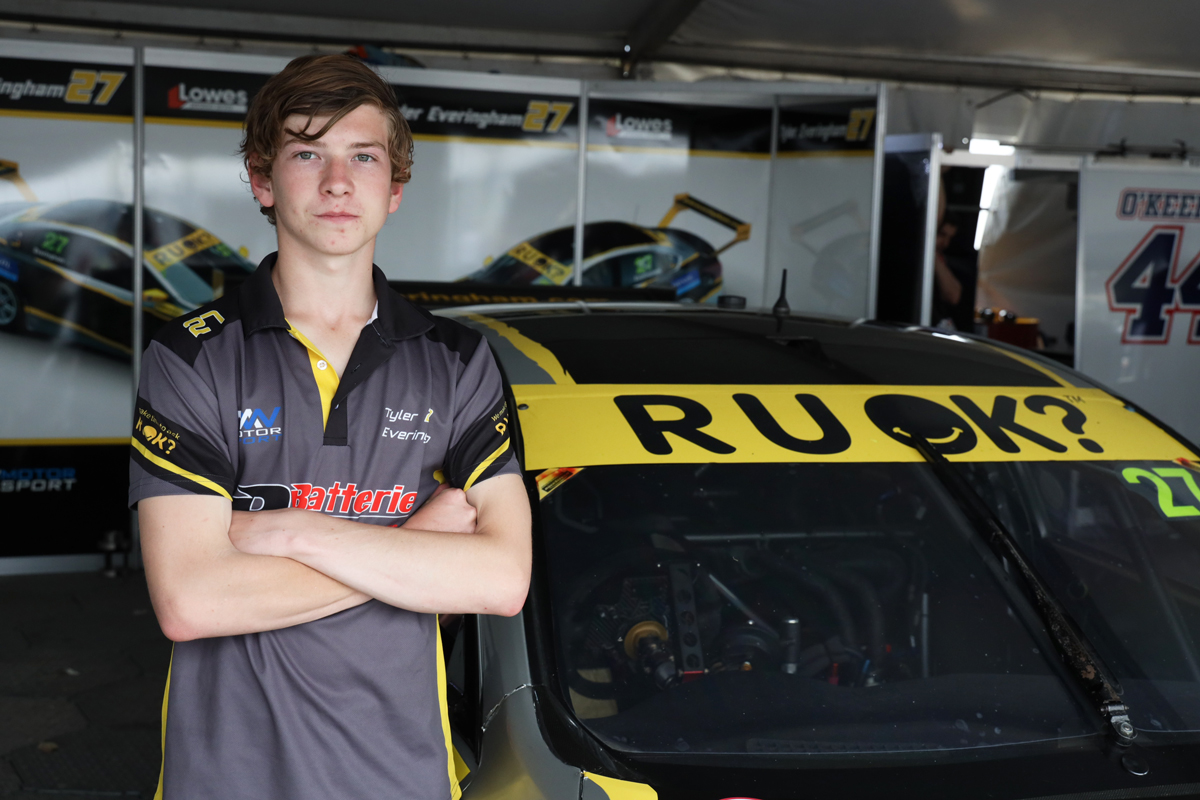 There is a heartfelt cause Dunlop Super2 Series teen Tyler Everingham is determined to drive.

On-track, the 18-year-old from Dubbo has come along in leaps and bounds, having won the 2018 Super3 title before stepping up with MW Motorsport to Super2.

It’s been in the last month though that his stocks have really soared, taking a maiden Super2 race win in treacherous conditions at Sandown and then receiving the 2019 Mike Kable Young Gun award.

Look a little closer and something different stands out from his breakthrough year.

It’s not unusual for a team or driver to throw their support behind a charity or philanthropic organisation for a one-off race meeting, but all along Everingham has sported prominent R U OK? branding on his #27 Altima and race suit.

R U OK? is an Australian not-for-profit organisation focusing on mental health wellbeing and suicide prevention.

“Depression and anxiety has affected my close relatives, my family, so that really sort of hits close to home,” Everingham explained to Supercars.com.

“Even just getting the name out there, like just for a refresher seeing R U OK? on the car or anything, it helps.

“It’s good to have it on there.

“It has become a pretty big cause now. They have got the support behind them, so that’s really great to see.”

There’s no hiding from the fact motorsport is an expensive game, requiring large portions of cars to be dedicated to sponsors, but Everingham would like to continue down the path of the raising awareness for the initiative where possible.

“We’ll try to run them as long as we can and just try to support it,” he added.

A tough run at the Newcastle finale dropped Everingham behind fellow rookie Dylan O’Keeffe to sixth in the championship, albeit still well clear of the likes of Ash Walsh, Jack Smith and Will Brown.

Having started the year slowly, Everingham described his late-season success – which also included a front-row start at Bathurst – as “absolutely surreal”.

“It’s pretty cool,” said the youngster who works as a data technician for his family’s Everingham Electrical business.

“We had a tough start to the series… most of the guys I’m around are a lot older than me as well, a lot more mature.

“I was pretty happy with a top 10 result but to be right up the pointy end, it’s pretty cool.”

Everingham may be the only one of MWM’s three 2019 drivers to continue on next season, with Zane Goddard and title winner Bryce Fullwood expected to graduate to the main game.