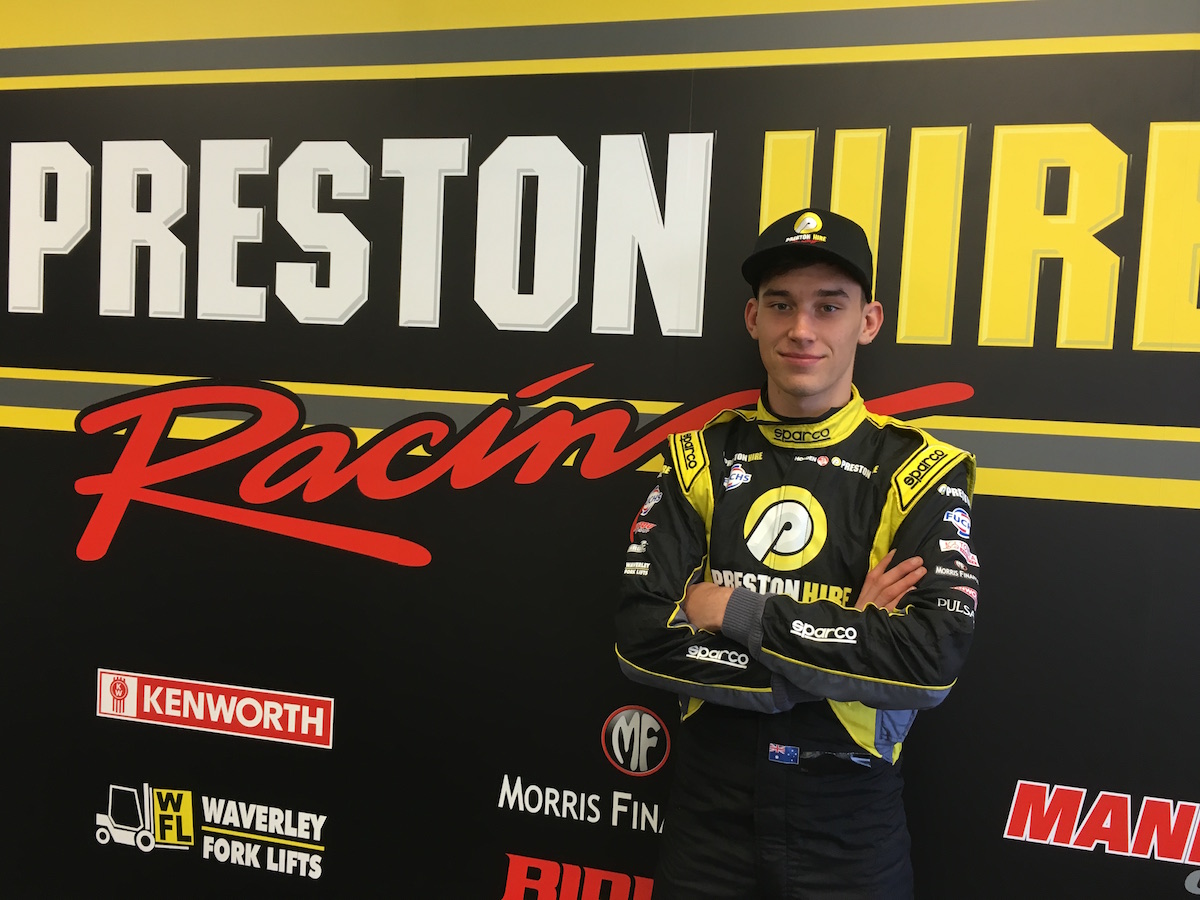 The West Australian – who turns 18 next week, before the event – brings his Triple Eight-built New Gen Supercar to the team.

Kostecki’s Holden Commodore has been transported from the team’s base in WA to the Dandenong workshop so the Preston Hire Racing team can make the required changes and transform it from a Dunlop Series racer into a fully-blown Supercar.

The opportunity comes after Lee Holdsworth’s extraordinary smash in Darwin, which left the 33-year old driver with fractured bones and a smashed car.

Given the turnaround to Townsville and Kostecki’s Triple Eight connection, a deal has been struck to give the young driver the chance to mix it with the best in Townsville and at the Coates Hire Ipswich SuperSprint, racing under team owner Charlie Schwerkolt’s REC (racing entitlements contract – licence to race).

Kostecki has an extensive racing background, having competed around the world in various categories, but was surprised to get his opportunity in the main game so soon.

“Thanks to all the guys and girls at Team 18, Charlie and Jeff [Grech, team manager], everyone, for giving me the opportunity to be able to get behind the wheel, drive for them and represent their team.”

Team owner Charlie Schwerkolt was pleased to have Kostecki in the car and to make the grid in Townsville, after Holdsworth’s car was far more damaged than initially expected.

“The car is repairable but it’s going to take a lot longer to be repaired,” Schwerkolt told supercars.com.

“There seemed to be a lack of spare cars out there, Triple Eight couldn’t help … so we came up with the idea of someone in the Dunlop Series who wanted to step up into the main game.”

Both Kurt and brother Jake race in the Dunlop Series and have bullishly pursued motorsport careers.

“We thought it was a great opportunity for them and to help us out as well so we really, really appreciate it – so that way we can get on the grid for all those sponsors," Schwerkolt said.

“The car will be all decked out in Preston Hire livery and look exactly the same but we’ll be running our gear in the car – the engine and transaxle.”

The team will secure a new Triple Eight chassis for the following round at Sydney Motorsport Park and expects to have co-driver Karl Reindler in the car while Holdsworth continues to recover from a fractured pelvis, ribs and knee.

Holdsworth met Kostecki yesterday and went into the workshop earlier in the week to see his team.

Reunited with my @prestonhire_racing crew. Can't wait to be driving again! Yes it was hard to get those jeans on ?? pic.twitter.com/jR7EgDRAm8

“He [Kurt] is a great young kid – Lee’s probably going to catch up with him again next week at the race shop to give him some tips,” Schwerkolt said.

Co-driver Karl Reindler, who was initially planned to sub for Holdsworth, was instrumental behind the scenes in making this happen for Preston Hire Racing, despite losing the chance to race the next two events.

“Karl’s been great, he’s had to step aside here for the team,” Schwerkolt said.

“It was really good of him to suggest the Kosteckis to make this work so I’ve got to thank him for making it happen.”

Kostecki sits 11th in the Dunlop Series after debuting in the category last year and learning the New Gen car this season. His best result this season has been fourth in Perth.