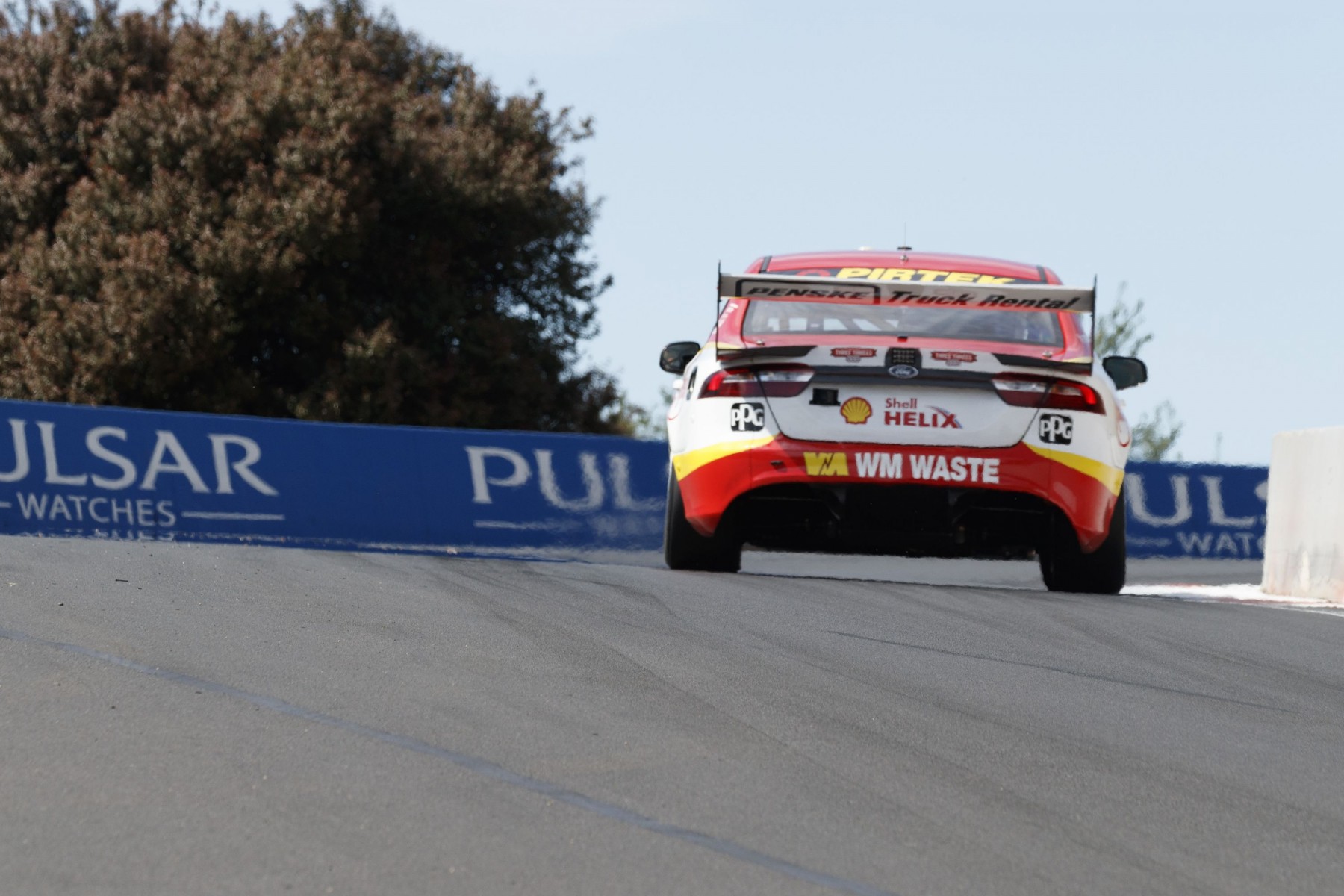 With the 2017 Virgin Australia Supercars Championship complete, and Christmas just around the corner, it’s time to start Supercars.com’s look back a massive season.

We’ll have a full range of review content over the coming weeks, covering the drivers, performances and moments that made 2017 a year to remember, but we get off the line with a snapshot of the key achievements.

Scott McLaughlin was the king of qualifying, ending the campaign with 16 ARMOR ALL Pole Awards, breaking Jamie Whincup's 2013 record of 13.

While one - that lap at Bathurst - stood out, the extent of his supremacy is represented when you crunch the average grid positions of the field, coming out a full row ahead. 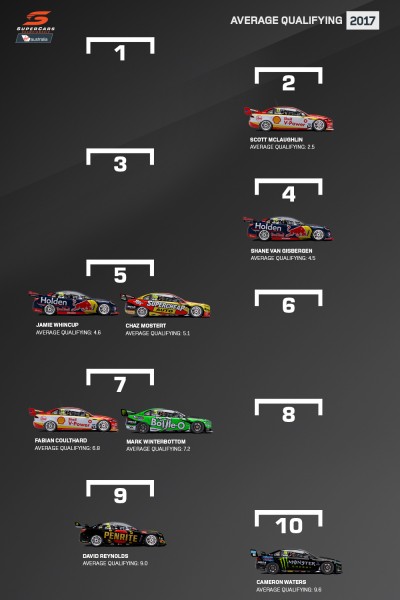 Six of those came from pole position, the others recorded from second in the Barbagallo opener and 13th with Alex Premat in the Gold Coast Sunday race.

McLaughlin finished the year with the most visits to the podium - his 16 two better than Whincup - and the most top-fives with 18.

His average finishing position of 5.3 shaded 5.7 for Whincup and 5.8 for Fabian Coulthard. Statistically, Premat was the best of any driver to start a race this year with 5.0, but that is skewed by the #17 Ford's Bathurst DNF.

Whincup’s consistency and lack of DNF, though, meant he was in the top 10 in 21 of the 26 races, one clear of Coulthard and Chaz Mostert with McLaughlin and Shane van Gisbergen a further one behind.

Key performances in winning his seventh championship, Whincup recorded two of his four victories in the last three races of the year after going winless through the first half. 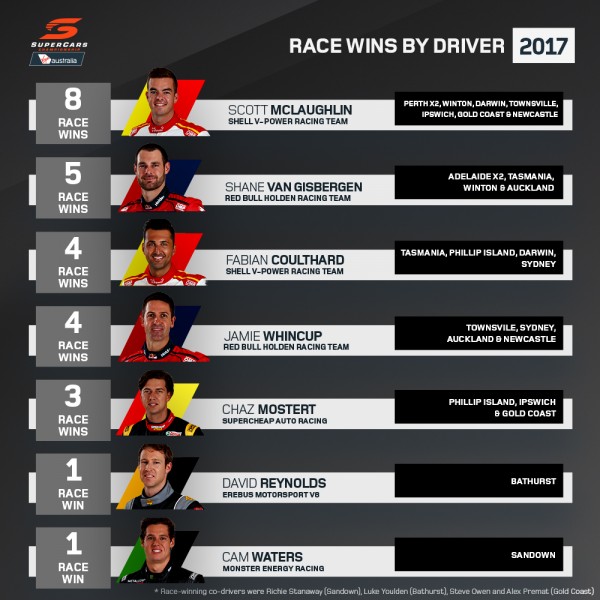 Ford won the manufacturers’ title for the first time since 2009, sealed with five races to spare with Mostert and Steve Owen's Saturday victory on the Gold Coast.

Holden finished six wins shy, while Nissan did not get on the board. 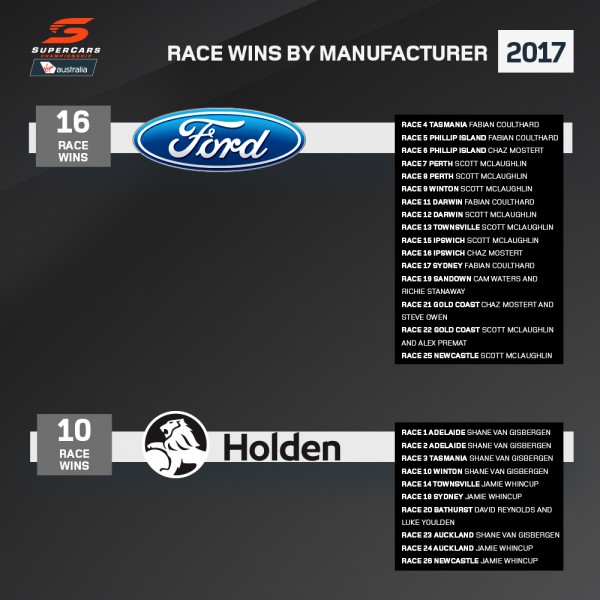 McLaughlin was also in control when it came to fastest race laps, his seven a little better than one every four races across the 26-start campaign.

Admittedly the tally that counts the least in the grand scheme of things, Whincup didn't get on the board here until the third-last race, at Pukekohe, while 10 drivers finished a day with the accolade. 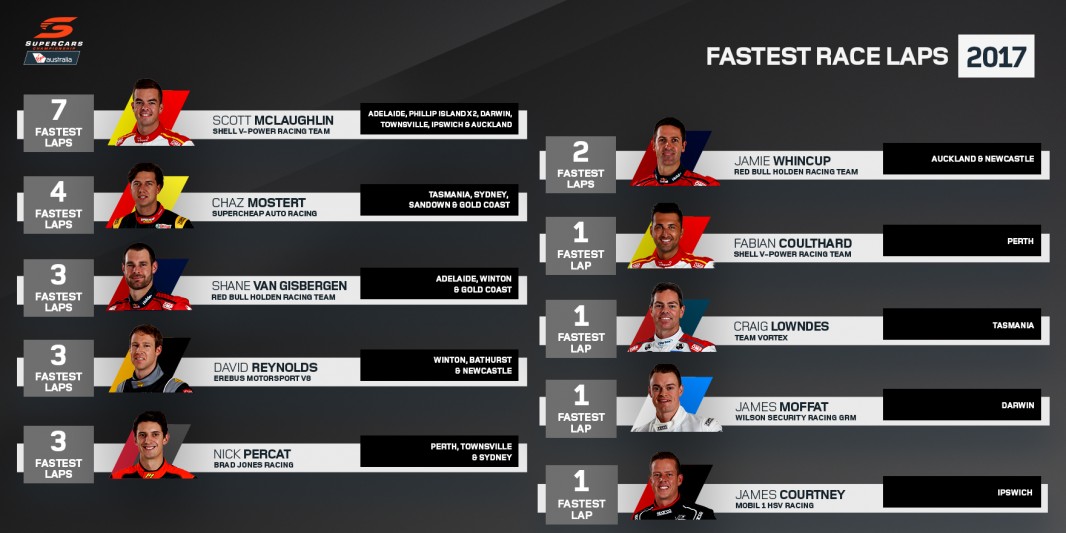