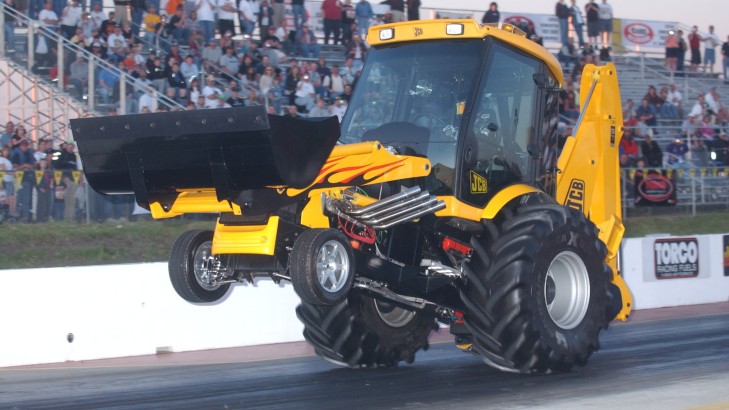 The famous JCB GT Backhoe loader is scheduled to make a rare appearance in Australia this October where it will set a world record and officially become the world's fastest earthmover at the Supercheap Auto Bathurst 1000.

The 1000 horsepower JCB GT is a unique 'one-off' machine powered by a supercharged Chevrolet V8 big block engine, and equipped with a belt driven supercharger and a pair of four barreled Holley carbs. It exhales via eight, 20-inch straight-through exhausts and reaches top speeds of around 193km/h.

"The JCB GT is unofficially known as the world's fastest backhoe, and this run will finally make it official. We're excited to see how it performs," said JCB CEA Executive General Manager Hylton Taylor.

"More than two years of research and development went into producing the GT, so I'm sure it will exceed expectations."

Normally housed at JCB headquarters in Staffordshire, UK, the GT will embark on a four-city tour of Australia, beginning with the Deni Ute Muster in NSW on October 3 and 4, where it will make trial runs and put on demonstrations in preparation for the official timed record run.

The first official timed run will be made alongside the V8 Supercars at the Supercheap Auto Bathurst 1000, where a trained specialty driver from the UK will attempt to run the modified backhoe down a 250 metre stretch in under four seconds. This run will be timed and submitted to the Guinness Book of World Records as evidence of the JCB machine's innovative design and power.

The JCB GT will continue its tour of Australia, with timed runs also planned for the Gold Coast 600 in October and the V8 Supercars finale, the Sydney 500, for its last appearance.

Tickets are available for the three V8 Supercars events now.

This is the first time the JCB GT has been in Australia since its debut appearance at the Australian Formula One Grand Prix in 1990.

The original GT was built by JCB at the Staffordshire UK factory in the late 1980s, and appeared at a number of motor racing circuits like Brands Hatch and Silverstone. The current GT now makes regular appearances both in the UK and also motor racing drag strips in the USA.

16/07/2014
Related Content
2014 Supercheap Auto Bathurst 1000  ›
2014 Castrol EDGE Gold Coast 600  ›
2014 Sydney NRMA 500  ›
Stay In The Know
Sign up to the Virgin Australia Supercars Championship Newsletter
We use cookies to ensure that we give you the best experience on our website. If you continue to use this site we will assume that you are happy with it.Ok