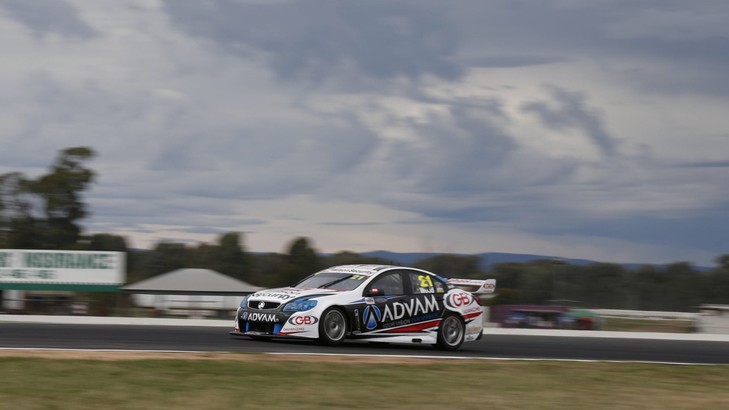 Surprise qualifying star Dale Wood has praised Brad Jones Racing teammate Fabian Coulthard for playing a key role in his third and 11th grid positions for today’s Race Seven and Eight of the V8 Supercars Championship at the Winton 400.

Wood, the 2013 Dunlop Series Champion, has had a rugged introduction the main game in 2014 in his Team Advam/GB Galvanising Holden Commodore VF, running 20th in the Championship with an average qualifying position of 21.7.

Wood was able to post his two best qualifying times on a track made difficult by a narrow high-grip line.

Coulthard shattered the old qualifying lap record to claim double ARMOR ALL Pole Positions in his Lockwood Racing Commodore, but others struggled including defending Champion Jamie Whincup who could only claim 14th and 2st grid spots.

“Part of the reason I have done well today is we are obviously facing conditions that we don’t normally face with the track,” Wood told v8supercars.com.au.

“I rate Fabian as one of the top couple in the field and I am able to look at his data and I think he does a fantastic job.

“The way he adapts to different conditions we have, being able to look at his data and learn has been a massive help for me.”

Wood said it was important not not only access his teammate’s data, but he also had to be “open-minded” enough to adapt his driving style and set-up based on what he was seeing.

“Then I hope I can continue to have results like that,” he added. “I am really happy to have put it up there so early in the year.

“It’s so tight out there I am just pumped to be where I am.”

Wood said he was conscious of having to back up his single lap qualifying performance with strong race results. He said the narrow race line would be an important factor.

“But at the moment I probably rate my racing ability higher than my qualifying ability so I feel comfortable going into the race in the positions I am at.”

Showing how quickly expectations change, Wood even admitted to feeling a little disappointed that he had not finished higher in Race Eight qualifying.

“It’s keeping it all in perspective… It’s pretty good, I am happy.”

This is Wood’s second crack at the V8 Supercars Championships after a brief and disappointing foray with Kelly Racing in 2009.

Dale Wood  ›
15' GB Galvanizing Racing ›
2014 Winton 400  ›
Stay In The Know
Sign up to the Virgin Australia Supercars Championship Newsletter
This website uses cookies to improve your user experience. By continuing, you will be providing your consent to our use of cookies.Ok