Dale Wood is not focusing on his podium finish at Winton last year as he and his Brad Jones Racing team prepare to head back to the rural circuit next week.

Instead, the 31-year old and 2013 Dunlop Series Champion is looking to get more out of his GB Galvanizing Commodore in qualifying to ensure he's in a good position at the hard-to-pass circuit.

It was a strong qualifying effort that put him up the front last year, when he started and finished third in the first of three races at Winton. However, a number of factors contributed to the results at the 3km circuit last year - such as the epoxy sealant laid on the surface, that reacted with the soft tyre and saw record times produced in the V8 Supercars - which are not likely to come into play again.

"Going there expecting the same result would be crazy because we just know how tight the category is at the moment," Wood told v8supercars.com.au.

"To think we can go there and easily expect the same as last year would be wrong - we'd be setting ourselves up for disappointment...

"I'm always excited to get back in the car prior to each round, and this one maybe more so than some others - but again, like I say, I think we've got a big job ahead of us to be able to hope for podiums." 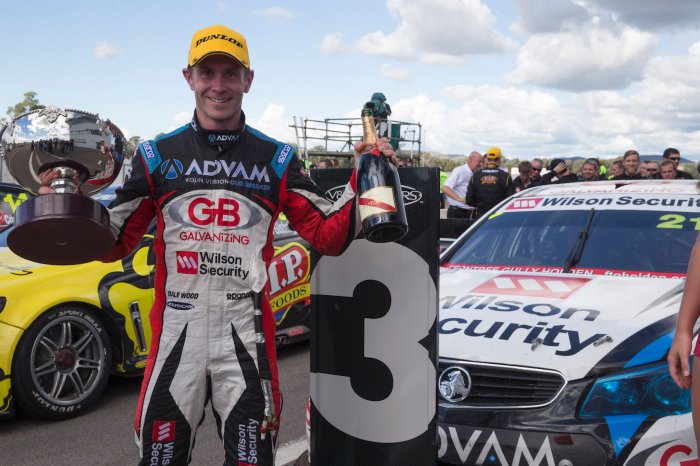 Wood sits 16th in the Championship and is happy with his results so far this season, as he works through the different processes the 2015 format requires.

In just his second year full-time with the team - after finishing 24th in the main game last year - Wood has seen improvement within himself and is focused on better qualifying performances to help elevate him from the mid-pack.

Different tyre rules have made it tricky, because the team must use its green rubber more sparingly across the weekend - Wood believes there is now even less margin for error when trying to dial a top time.

"Last year we generally went into each qualifying session with two sets of tyres so you could put your first lap in on your first set of tyres, get a feel for and essentially put a banker in, get the understanding of the car - we don't have the beauty of that this year," Wood explained.

"Effectively we roll around and warm the car up on our warm up tyres ... and then have to go for it, one lap on the hards.

"I think that's probably not something I'm doing the greatest job of at the moment. It's certainly the biggest thing I need to improve on, being able to commit to that one lap on that one set of tyres we get per qualifying session, and not coming in with a mistake being made or feeling like I hadn't gotten the most out of the tyre."

While Wood believes his team needs to improve its pace on the hard tyre, his stable-mate Fabian Coulthard has shown the BJR cars can do the job on both Dunlop tyre compounds, sitting fourth in the Championship and leading the way in the three-car squad.

"Fabs is consistently doing a good job in what's essentially the same car and same tyre, so that says to me I have to do more work to close the gap to what he is doing. But also, I feel like I like the car a little bit different and we still haven't found the sweet spot for me on the hard tyre."

That being said, Wood is content with where they are at after three Championship rounds, feeling closer to Coulthard and Jason Bright on track and improving his consistency.

"On the whole I'm pretty happy, we made a significant jump, closed the gap a lot to the two blokes in my team and also I feel like we've been much more competitive.

"So far this year we've run mid-pack. Perth was probably a weak point for me in qualifying ... I need to personally work on getting the car more to my liking prior to qualifying.

"But I'm quite happy, I think things are going along pretty well, we're mid-pack in the championship and that shows that's where we've been consistently in the year."

Wood's qualifying average last year was 19.7 and so far in six of nine races he has started higher on the grid that 19th, his best start 13th in Tasmania.

"I think at the moment we've got more consistency than we had last year, we're probably between seven to ten 10 sports further up the grid - so I think the year's gone along pretty well.

"I'm expecting a lot more from it - but I'm certainly not unhappy with it."

2015-NP300 Navara Winton SuperSprint  ›
Stay In The Know
Sign up to the Repco Supercars Championship Newsletter
We use cookies to ensure that we give you the best experience on our website. If you continue to use this site we will assume that you are happy with it.Ok