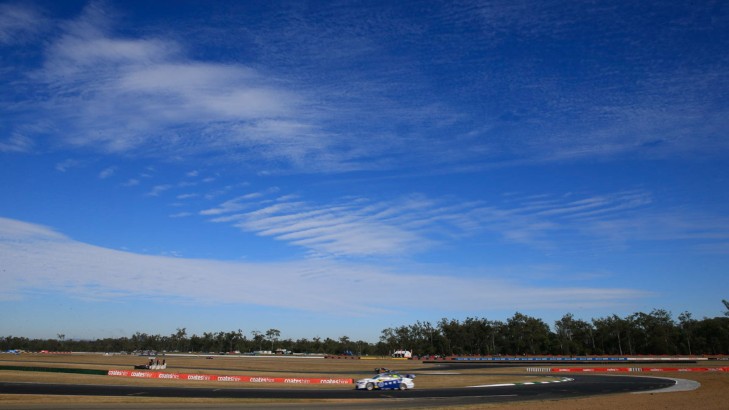 The races will kick off atthe Coates Hire Ipswich SuperSprint today, and you can be sure the drivers won't be leaving a stone unturned as they fight for critical points before endurance season arrives.

Hear the roar of four wheels as the V8 Supercars tear around the track with one practice session, back-to-back qualifying sessions and two 60km races tomorrow.

Before the drivers push the limits as they fight for a front row start during qualifying - with the first 10-minute hit out starting at 11.50am, followed by the second session at 12.15pm - they'll have a chance to practice for 15-minutes at 10.00am.

Then, strap yourself in for two 60 kilometre races around the six-turns of Queensland Raceway. The lights go out forRace 1 at 2.25pm, ahead of Race 2 at 4.30pm.

But before they're unleashed onto the paperclip, come along to the V8 Supercars Paddock for the opportunity to meet the drivers and grab an autograph during the official V8 Supercars Driver Autograph Session. Each driver will appear at the front of their team transporter for half an hour.

You'll also have the chance to catch up with the starts of the future during the V8 Supercars Dunlop Series Drivers Autograph Session. Meet the next Nick Percat or Scott Pye during the 30-minute session.

Between races, keep your adrenalin pumping when the Touring Car Masters, Sports GTs, Formula 4 and the Dunlop Series battle it out on track. The Hot Wheels Stunt Team, Team Army and Aussie Bandit ute will also be on hand delivering high-octane entertainment to the paperclip.

With kids 12 and under receiving free trackside admission with a paying adult, the Coates Hire Ipswich SuperSprint is the ultimate family outing. Between 10am and 4pm, the little race fans will be kept entertained at the Disney Zone with the brand new inflatable Disney/Pixar's Cars obstacle course that will have them bouncing off the walls and sliding down the slopes.

The all new Cars Ice Racers ice rink will put their ice racing skills to the test, while they can catch up with Lightning McQueen and Mack the Transporter from Cars and chill out and watch a movie in the cinema. The Cars race track returns to Queensland Raceway, as well as a bunch of craft activities and interactive iPad Zone for little gamers and puzzlers alike. Australia's favourite jumping castles will also be on site, providing hours of bouncing fun for your children on the super-dooper inflatables!

Make sure you're trackside to experience all the action on and off the track at the Coates Hire Ipswich SuperSprint. Book your tickets now at ticketek.com.au.

McLaughlin uses the low to drive the highs

Courtney 'kicking himself' over lost points