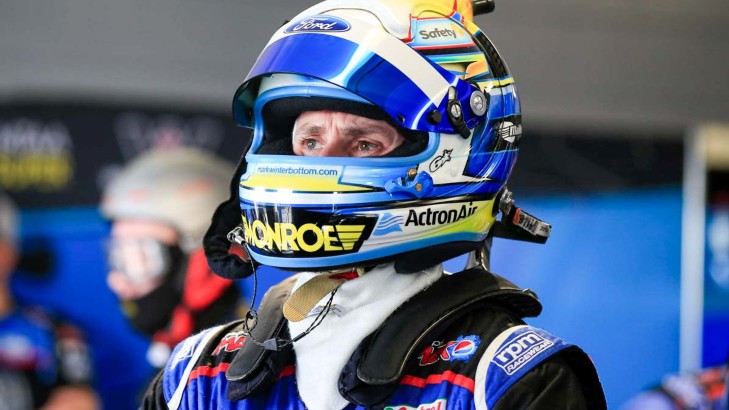 Mark Winterbottom believes his Ford Pepsi Max Crew team can push back into the winners' circle and score victory at the Supercheap Auto Bathurst 1000, despite a disappointing Sandown performance and slipping back to third in the Championship.

After finishing 10th at the Wilson Security Sandown 500 with Steve Owen, Winterbottom wasn't his usual cheery self when speaking to v8supercars.com.au - "pretty down at the moment," he said.

'Frosty' feared he was running out of time to get his Championship on-track, with just four events remaining in the 2014 season.

However, the Ford favourite knows there is hope yet - and backing up his 2013 Supercheap Auto Bathurst 1000 victory could very well be the way to turn it all around.

He suspected a mechanical issue with the car during Sunday's Sandown race, but was matter-of-fact about getting on with it and challenging again next round.

"We've just got to fix it, don't whinge about it, make excuses or complain, just get in there and fix it just not let it drag on too long," Winterbottom said.

"You go back to Bathurst now and I'm sure we can still win that race. We just have to fix what's going on."

Winterbottom was almost certain there were issues with his Ford Falcon FG on Sunday at Sandown, and while TV cameras pointed at co-driver Steve Owen spinning and losing several places during his stint, Frosty placed no blame, instead saying the car was practically impossible to drive.

"I'm 99 per cent sure they'll find a damper failed, because the way the car was handling felt as though I had a left front damper fail," he said.

"You don't make excuses, you try and battle on and get to the end. Steve is a good driver and he spun out - the car was almost undriveable.

"Disheartening - you have a bad couple of rounds and finally get your feet back and qualify at the front for something to go wrong.

"If you've had five good rounds leading into you get away with it - but when you have bad ones, do a good job and have something go like that, that's when you get dejected."

Winterbottom isn't worried about his personal performance, but just the fact there are only four more events to score points towards the 2014 Championship, with Sandown winner Jamie Whincup sitting 279 points ahead.

"I know I'm driving alright, so I'm not questioning my driving or anything - which is good."

"In terms of the Championship ... we'll fix it we'll end up winning races again, but the fact is we had a lead and it's just gone pear shaped. That's the thing that is the disappointing part, because you can't afford to have slumps, and we're having them.

"The weekend was a good chance to get it back because the other FPR cars were quite reasonable in the race, just mine was a long way off.

"If I'm in third and we had a good position, probably could challenge some of the guys for the lead or at least put pressure on and race them, not just bounce around at the back. So that's the thing that's getting me down a bit."

While Winterbottom took solace in the fact that they finished sixth at Sandown last year and continued on to win the big 1000, Ford Performance Racing team boss Tim Edwards seemed irritated at the suggestion of the statistic.

"Am I supposed to draw a positive from that?" he responded."We came here [Sandown] to win a race and we weren't good enough."

He didn't feel like it was a matter of FPR falling off the pace - particularly as #55 and #6 had good speed - but just a reflection of how close the field was.

"There's no big drop - look at the fastest laps of the race ... largely the whole field can do very similar lap times. You've got 25 blokes who are all on the money ... Jamie was really the only standout. We had the measure of everyone else, I think he was in a league of his own."

Is Edwards worried about Frosty's Championship?

"From the point that we weren't winning races I started to worry about it for sure," he said.

"Unless we can dial some speed into the car it would be very hard for us to win the Championship on the pace we've got at the moment."

While Whincup had a bit of a lull early in the year, down in fifth when Winterbottom was his strongest at the top: "It's just Jamie. I think we can race everybody else, but Jamie seems to be in a league of his own again," Edwards said.

Steve Owen  ›
15' Pepsi Max Crew ›
2014 Supercheap Auto Bathurst 1000  ›
Stay In The Know
Sign up to the Virgin Australia Supercars Championship Newsletter
We use cookies to ensure that we give you the best experience on our website. If you continue to use this site we will assume that you are happy with it.Ok