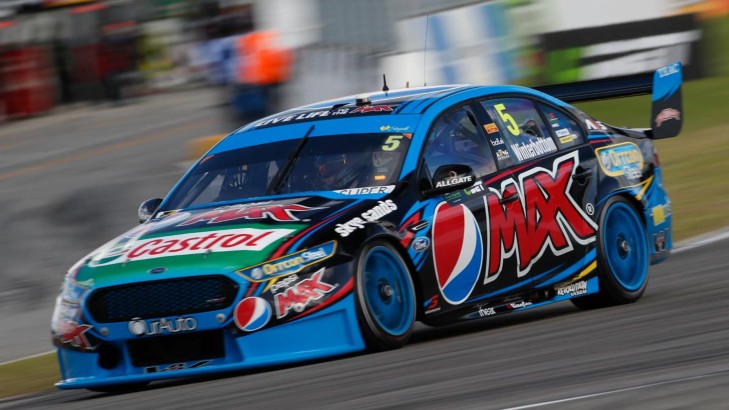 Mark Winterbottom has praised the V8 Supercars Commission's decision to give teams an extra set of Dunlop hard tyres for Friday practice at Winton.

It was announced this morning that teams would receive four additional tyres to help maximise the two hours of track time on Friday - which doubles last year's practice time to incorporate 'testing'.

The decision has come after much discussion around tyre allocation and formats across the SuperSprint weekends, with many teams and drivers critical of the limited rubber they have to work with over the race meetings.

"It's great that they've done it and it's definitely a plus because it makes that practice session valuable now, and a true indication," Winterbottom said.

"The sport needed it and it's great that our sport takes criticism and feedback and reacts to it because a lot of sports out there wouldn't change their rules."

While teams will be able to dip into their tyre banks and use pre-marked soft tyres - which shouldgenerate quicker lap times than the 'green' hards - Winterbottom still believes the new tyres will give a helpful indication of performance.

Engineers should be able to interpret the data and have an understanding of how their cars stack up against competitors.

"It's good because we were [finishing the day] unsure of who was where - the way formats are now, we qualify on hard tyres," Winterbottom said.

"At least going into qualifying it's not unknown."

While Winterbottom - who won both 60km Saturday SuperSprint races and earned the day's maximum 150 points, the same amount awarded to Sunday's 200km winner - suggested they would still be one set of tyres short for the race, his team principal Tim Edwards last week told v8supercars.com.au he felt race allocation was fine.

Edwards - who serves on the V8 Supercars Commission - believes the current allocation pushes both drivers and their teams to the limits as they scour through strategy options that ultimately make the racing more exciting.

The only question mark he raised was having enough tyres for practice, which has now been improved.

Providing an additional set of tyres for future events will be considered, and the Commission will discuss the Saturday racing format - another key talking point across the Perth SuperSprint - later this week.

Winterbottom's Sunday race performance was marred by the timing of the safety car, and while teammate Chaz Mostert managed fourth on the same strategy, can #5 dropped back through the field to 15th.

Winterbottom said the team was unsure what went wrong with tyre life, but he is positive they will be in a better position this weekend at Winton.

"It's one of those things where you sort of scratch your head sometimes," he said. "We're likely to go to Winton and have the best tyre life - it's bizarre how one little thing wrong can expose you massively."

While his soft-hard-recycled soft strategy was risky, he backed the team's decision.

"At the end of the day, we still think we did the right call and the right strategy. If that safety car didn't come out we would have been one, two, three - thirty seconds up the road.

"We'll see what happens at Winton but we back ourselves and if we get the tyre life to last like Chaz's, it's still a good result."

Click here for more information on the Winton SuperSprint.