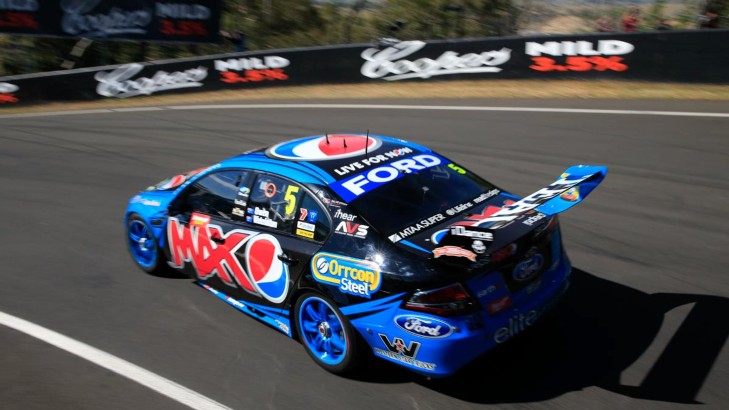 Practice was marred by a dramatic accident, but Mark Winterbottom emerged on top as the morning's fastest man, recording a 2min06.0635 lap around Mount Panorama.

With many high profile competitors already suffering setbacks at the Supercheap Auto Bathurst 1000, some could say it would be the matter of being the last man standing after 161 laps around the Mountain tomorrow.

"It's a long race - if it was a sprint race, a 30-lapper I'd think we were going pretty good, but one safety car and it all just untangles itself. If they crash tomorrow, that's when you get rewarded, not today," Winterbottom told v8supercars.com.au.

While he believes the race will settle down tomorrow, he said definitively - there will be safety cars.

"People will tame down - everyone's trying to do their one lap flyer here, so I'm sure in the race survival is always on everyone's mind, so we'll definitely - there's going to be safety cars. We'll see what happens."

Frosty agreed it was a bit scary out there.

"Yeah - when it moves it definitely gets your attention - but that's what the best tracks should probably do, they challenge the driver," he said.

"And the predictability is the thing that's catching everyone out - as soon as it goes, it absolutely goes, it fires you off.

"Thankfully our cars seem to be quite good and you make the best of a worst situation, type thing, and when you get it right you get massively rewarded, and when you're getting it wrong it's fairly punishing.

"I'm not surprised - the way the car feels, a shunt could happen quite easily. And that's not even into the long runs yet, that's just people doing two lap flyers. It will be interesting."

Winterbottom was pleased to be back on top, and now focus is solely on his Top 10 Shootout flying lap, gunning for ARMOR ALL Pole Position later this afternoon.

"The car was really good. The track was a little bit temperamental with temperature and grip levels and stuff, so it keep changing a little bit, but if that was the Shootout then it would've been game on.

"But we'll go again this afternoon, but I feel pretty good about the car, the way it was then, and it's the big lap this arvo but even the race run was quite good too. So feeling good."

Winterbottom will be the sixth driver out on track in the 5.10pmshootout, after qualifying fourth yesterday, with Dale Wood, van Gisbergen and Fabian Coulthard to follow.

Luff and Tander on practice crash