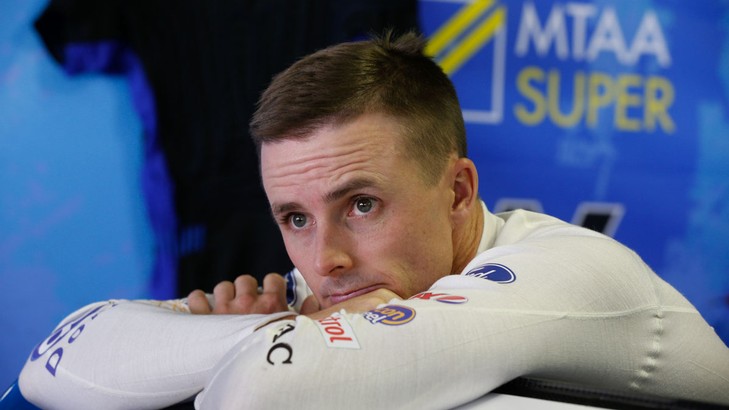 He was hoping to come out firing at the season opener, but Mark Winterbottom once again left the Clipsal 500 Adelaide with a less than perfect start to the year.

Though he sits is fifth in the Championship points after the weekend, mechanical issues hampered his Ford Pepsi Max Crew Falcon.

“I had it two days in a row. We are doing a whole re-engineer of it, just to fix it.”

Winterbottom was not caught up in the chaotic incident involving Jason Bright, though many other V8 Supercars suffered from damage at that point i nthe race. Winterbottom said Bright’s well-being was his first concern that day, despite a poor result in #5.

“My car was quite quick after that incident, I was setting some pretty good lap times, I was starting to catch the field back up and then it failed. I lost all my time. So we’ve got to fix that, it kind of hampered the day.”

Contact was made between Walkinshaw Racing’s Nick Percat and Winterbottom in lap 19 of the race with Frosty ending up in the tyres. The team was unable to confirm whether the contact caused or contributed to the roll bar breakage – but FPR doesn’t know exactly what happened.

“It was one of those days,” Winterbottom lamented.

"But I think the main concern was obviously Brighty, when you see big shunts like that ... When you’ve got roll bars and stuff, you finish wherever but you still walk away from the car.”

Now he can only look forward, with the Albert Park event just one week away.

“Grand Prix will be good I think,” he said.

Winterbottom also heads to Rio de Janeiro to contest a round of the Brazilian Stock Car Championship the week after the 2014 Formula One Rolex Australian Grand Prix – and he knows the schedule is something to be careful of.

“I go to Grand Prix, two days after to the Brazil race and then to Tassie – five races in six weeks.

“The problem is when they’re back to back you need to make sure you bounce back – that’s why Grand Prix is important. You go to Grand Prix and it’s all confined – before you know it you’re four rounds in and you’ve got no speed. This Grand Prix is going to be really important.”

Winterbottom recorded two fourth place finishes on Saturday, and 12th on Sunday at the Clipsal 500 Adelaide, though he was a lap down.