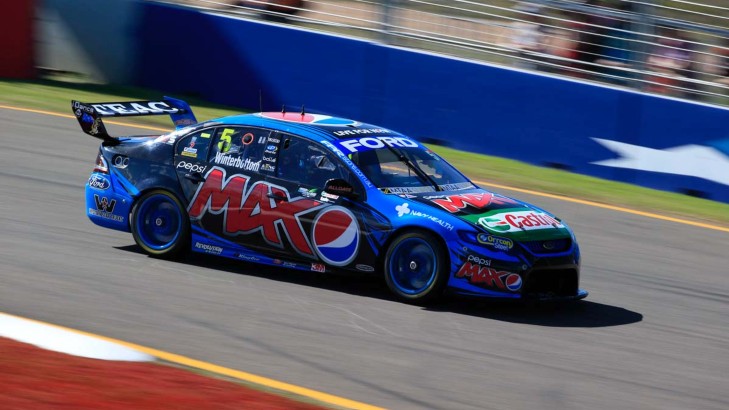 The chase for improved qualifying speed will be an important part of Ford Performance Racing's Monday test at Winton as it seeks to end Mark Winterbottom and the blue oval's ARMOR ALL Pole Position drought that now stretches back 24 races to Phillip Island 2013.

The 2014 Championship leader has twice qualified on the front row this year in his Pepsi Max Falcon FG II but has yet to grab the ARMOR ALL cash.

But his main concern is that qualifying back in the pack means he is more likely to get embroiled in an incident and lose valuable championship points.

"Top five for us is a really good qually right now," Winterbottom admitted to v8supercars.com.au.

"If we can qualify at the front then our championship looks really good. But if you keep qualifying 12th, 17th and 10th then one day someone is just going to drive into the side of you and you could lose 75 points in one hit.

"If you are at the front you are clear of all the action."

It's not only Winterbottom's qualifying pace that is under scrutiny, as no Ford Falcon has been able to qualify first since Winterbottom sat on pole at Phillip Island last November. Since then, 24 pole positions have been decided and not one of them has gone to the blue oval.

If Winterbottom does go on to win his first Championship without claiming a pole, he will emulate the efforts of Russell Ingall in 2005 and Rick Kelly in 2006.

But Winterbottom's ability to win from as far back as 10th on the grid have been a key difference between his championship chasing efforts and Ingall and Kelly, who both snared the title based on outstanding consistency rather than race wins.

Winterbottom has missed poles by the barest of margins a couple of times. He was on the front row for Race 11 at the ITM 500 Auckland, edged out by the Holden Racing Team's James Courtney by just 0.0180 sec.

But more often than not Winterbottom and his fellow Ford fliers have been back down the grid, unable to find a green tyre gain in qualifying. However, in races the FPR Falcons have had exceptional tyre life and have been particularly strong on the soft tyre.

"We are struggling in qualifying," admitted Winterbottom, who has 29 career poles to his credit.

"I think aerodynamics plays a part in qualifying. In some circuits we have been deficient in a straight line.

"We are not using the tyre enough either. Which is why we are very good on softs, because we can just drive all day on them. But when we try and do one lap on them they just stay brand new, we don't get enough out of them."

"It would make it a lot easier, driving in the pack is a lot of risk. You want to get to the front and just drive clean and clear."

Winterbottom's engineer Grant McPherson said trying to find improvements in the Falcon's qualifying pace would be an important part of the Winton test, which will include all four Falcons run in the championship under the FPR umbrella, the four regular drivers and their Pirtek Enduro Cup co-drivers and the Dunlop Series entry driven by Cam Waters.

"We won't be throwing five sets of greens at the car trying to unlock the problem," said McPherson. "But I think we can definitely get a good read on our qualifying issues on used tyres.

"The number one thing that has held us back this year has been qualifying. And if we had qualified better and done all those other things equally ... we'd be more points in front."

Mark Winterbottom  ›
15' Pepsi Max Crew ›
2014 Coates Hire Ipswich 400  ›
Stay In The Know
Sign up to the Virgin Australia Supercars Championship Newsletter
We use cookies to ensure that we give you the best experience on our website. If you continue to use this site we will assume that you are happy with it.Ok