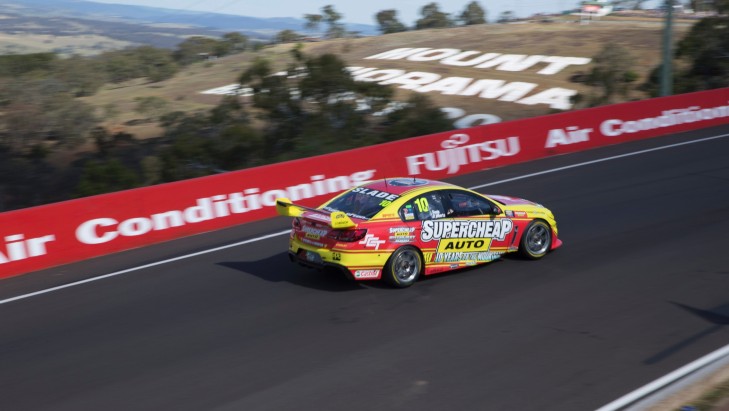 The 300km/h barrier could be well and truly broken on Conrod Straight this year at the Supercheap Auto Bathurst 1000 if technical changes, that effectively allow a greater top speed, are signed off.

The new speed mark at Mount Panorama would be a likely by-product of taller gear ratios designed to stop the cars bouncing off the rev limiter in sixth gear.

Altering the 'drop gear' ratios in the New Generation V8 Supercar Albins T6 transaxle has been debated within the Championship organisation and teams since Sandown last year because cars were spending two seconds on the engine rev limiter in top gear at 265km/h on the back straight.

The issue was also graphically portrayed during the telecast of the SKYCITY Triple Crown Darwin where cars were hitting the rev limiter on the one kilometre front straight earlier than ever because of the improved grip brought about by resurfacing.

Once cars 'hit the wall' overtaking becomes a moot point, while there is also concern about the potential impact on transaxle reliability of bouncing roughly off the V8 Supercar imposed 7500rpm limit.

V8 Supercars has compiled a list of circuits where the drop gear ratios could be altered to keep the cars off the rev limiter. Apart from Bathurst and Sandown, they also include Winton, Queensland Raceway, Albert Park, Hidden Valley, Sydney Motorsport Park, Barbagallo, Gold Coast and Adelaide Parklands.

The V8 Supercars Commission will make the final call on the changes, which would include adopting current gear ratios stipulated in the operations manual for some circuits and introducing a new ratio, because it already uses the tallest combination of drop gears.

Cracking 300km/h at Bathurst has been a much hyped target for V8 Supercars for years. According to figures supplied by Brad Jones Racing, the current top speed is about 295km/h as the cars peel into the Caltex Chase.

However, as recounted here in 2013 Larry Perkins and Dick Johnson Racing claimed to have broken through the 300km/h barrier in 2005. The claims were met with widespread skepticism along pit lane at the time.

This time round, if the taller drop gear ratio is signed off, there would be no such debate.

V8 Supercars has watched and paid attention to the limiter issue at Bathurst the last two years; in 2013 it was something of an unknown because of the introduction of the New Gen racer, while in 2014 track resurfacing meant better grip and the cars reaching the limiter sooner.

"The cars touch the limiter at Bathurst in qualifying, but not so much in the race unless you have a good draft," explained V8 Supercars sporting and technical director David Stuart. "It also depends which way the wind is blowing at Bathurst.

"We thought it might be a bit of a problem last year but then on Sunday the wind changed direction and we were fine."

Stuart said it was also important understand the unintended consequences of changing to a taller ratio.

"This debate has happened at Bathurst for the last couple of years," he revealed. "If we change the drop gear ratio down the straight what does that do up the hill? So there is a lot of analysis that needs to go into it and needs to be considered when a decision is made."

He also stressed the process of ratio revision required approval from the track safety committee and consultation with the teams via the Technical Advisory Panel (TAP) before going before the commission.

"After we work out what drop gear will keep us off the limiter and what the approach speeds to those corners then becomes, we will need to consult the CAMS National Track Safety Committee and make sure they are happy with that or whether there is anything that needs to be considered there," Stuart explained.

"If you are going quicker there may be consideration for run-off area or gravel or sand trap requirements.

"Whenever we do anything from a technical aspect we also have an obligation to consider the safety aspect as well."

Mostert moves up the order

Frosty to hit the footy field