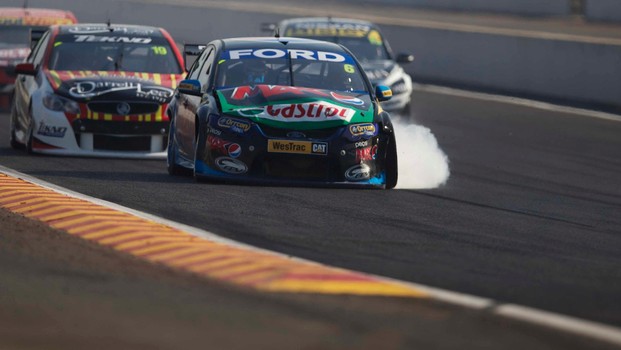 It’s a new day for Pepsi Max Crew FPR’sWill Davison after a DNF (did not finish) in yesterday’s race at the SKYCITYTriple Crown in Darwin.

Davison came off worst in the pile-up atturn six after the 60/60 rolling double file restart, which involved several drivers placed in the top 10 of the Championship.

Davison is still annoyed about what happenedyesterday, but concedes it is a new day and he is feeling fine this morning.

Scoring no points meant Davison droppedfrom third to fourth in the Championship – where just six points separatefour drivers. Jason Bright sits third with 1005, ahead of Davison on 1004, FabianCoulthard on 1000 and Shane van Gisbergen on 999. Click here for full Championship points.

“I feel good today – you press resetand go again,” Davison said on his way to breakfast, ahead of the 9.55amback-to-back qualifying sessions (local time).

“It wasn’t my fault, I was having a goodrun and you get wiped out – when the bloke leading the Championship justcruises away and gets even more points.

“So of course I’m really pissed off.

“But that’s racing, there’s nothing you cando about it besides come back stronger today and hopefully repay the boys for alltheir hard work.”

The car is brand new today, after a night ofhard work for the FPR team.

“It certainly was crash damage we didn’tneed – I don’t think anybody needs – so the windscreen forward’s been replaced,the boot back has been replaced, all the front corners. The engine unfortunately copped a lot ofdamage, the airbox – you name it – and all the panels.

“It’s been a big night for our team whichwe certainly didn’t need considering at the end of the first half we were allin really good positions without a scratch on the car.

“Throw an extra start in there and yourday’s ruined and a lot of money is torn up.”

But today is another day, and the cars areclearly quick, so Davison is ready to go hard in the two 100km mixed-tyreraces.

“We’ve stepped forward with the cars and asa team we were doing a good job yesterday.

“That’s racing, but it’s bloodyfrustrating… Things are quickly getting away from us, we couldn’t afford forthings like that to happen after Austin where we had a drama, and it was thelast thing we needed yesterday.”

Will Davison  ›
15' Pepsi Max Crew ›
2013 SKYCITY Triple Crown  ›
Stay In The Know
Sign up to the Virgin Australia Supercars Championship Newsletter
We use cookies to ensure that we give you the best experience on our website. If you continue to use this site we will assume that you are happy with it.Ok