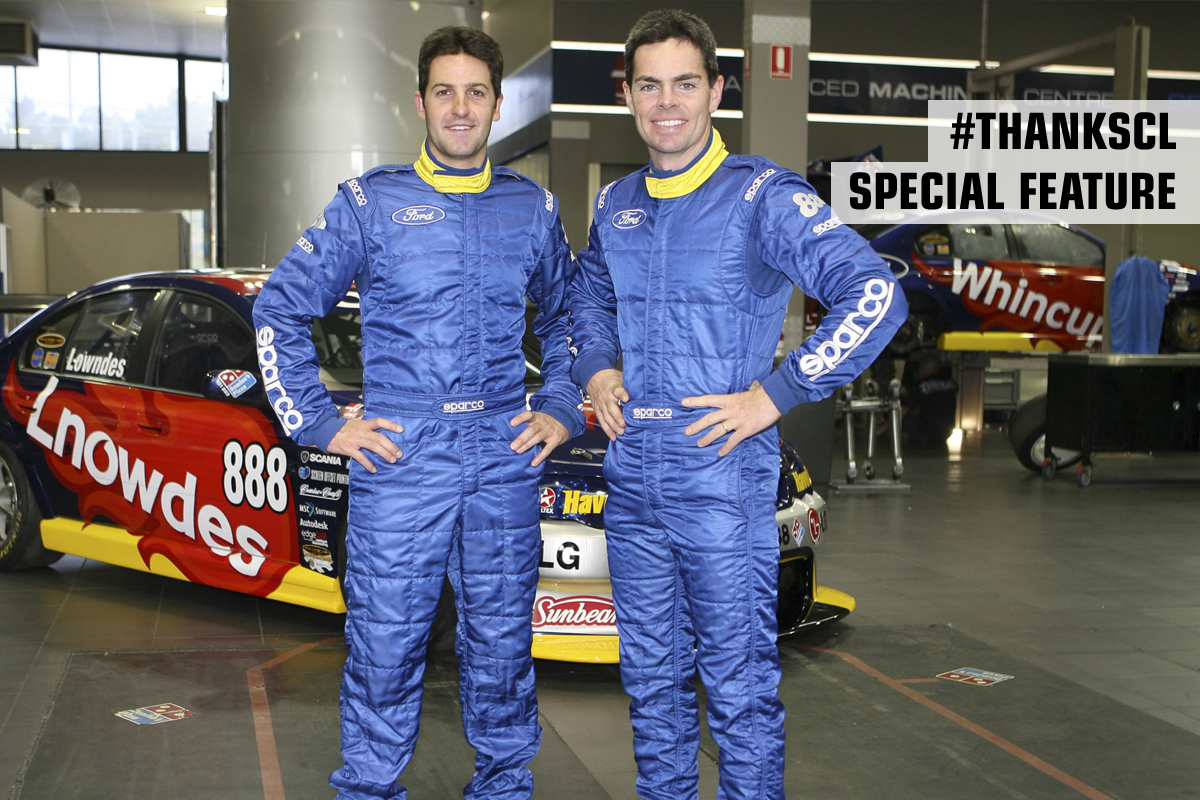 Craig Lowndes and Jamie Whincup have been the most successful, and one of the longest serving, team-mate partnerships in Australian touring car history.

It started in storybook fashion, with three Bathurst 1000 wins in their first three years together, kicking off with the emotional 2006 victory just weeks after Peter Brock’s death.

And while Whincup had essentially been hired as a back-up to superstar Lowndes, the apprentice soon took over from the master as Triple Eight’s leading driver.

Whincup has piled on seven titles to none since they’ve been team-mates, beating Lowndes in the championship every year bar one since 2007. 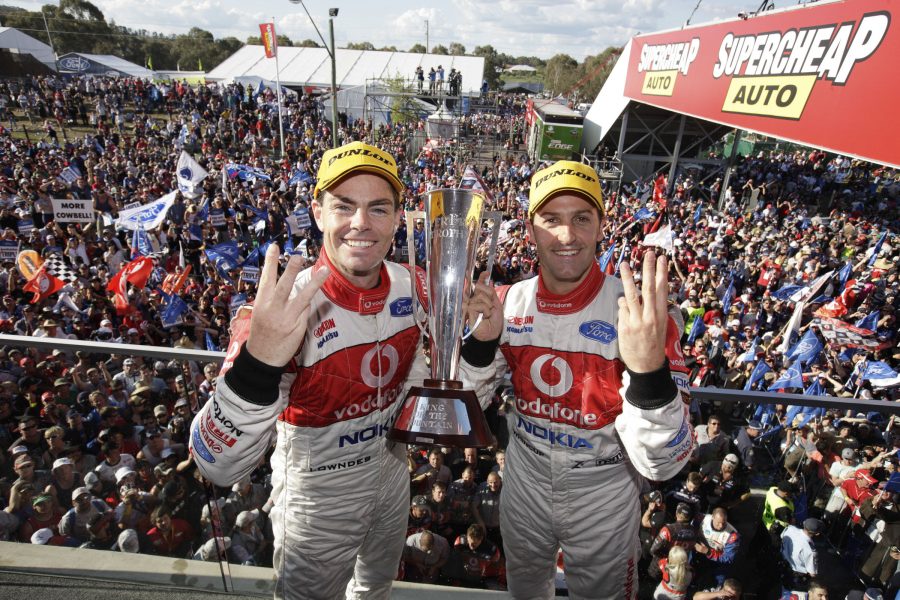 When a then 22-year-old Tasman Motorsport driver was weighing up his options for 2006, no one, including Whincup, could have predicted that outcome.

In fact, Whincup says today that the presence of Lowndes at Triple Eight was a deterrent to signing with the team, rather than a lure.

“I was warned against it,” Whincup recalled to Supercars.com of becoming Lowndes’ team-mate, having also had the opportunity to join Ford Performance Racing at the time.

“I think before myself, Lowndsey had six different team-mates in six years. He was carving up team-mates flat-out. 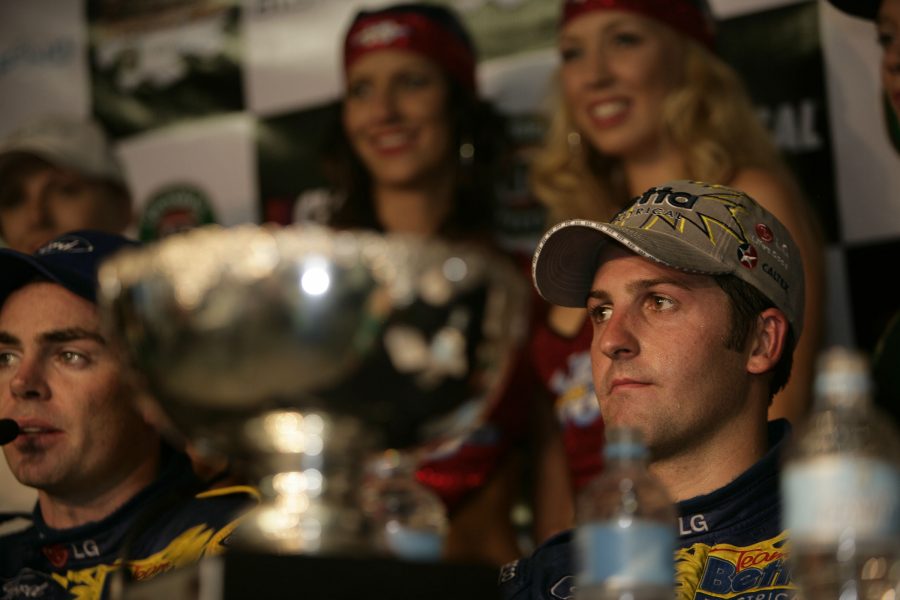 “If anything, it was a negative to go there and a lot of people warned me against it, but I said ‘no, I’ll back myself, it’s the best team for me’, which is how it’s turned out.

“He hadn’t had that many different team-mates because he was covering up any info or trying to shaft them.

“He was just doing his job to the best of his ability and was doing a good job, which made everyone else look ordinary.

“But he makes his team-mates better because he does such a good job. That was certainly the case for me.” 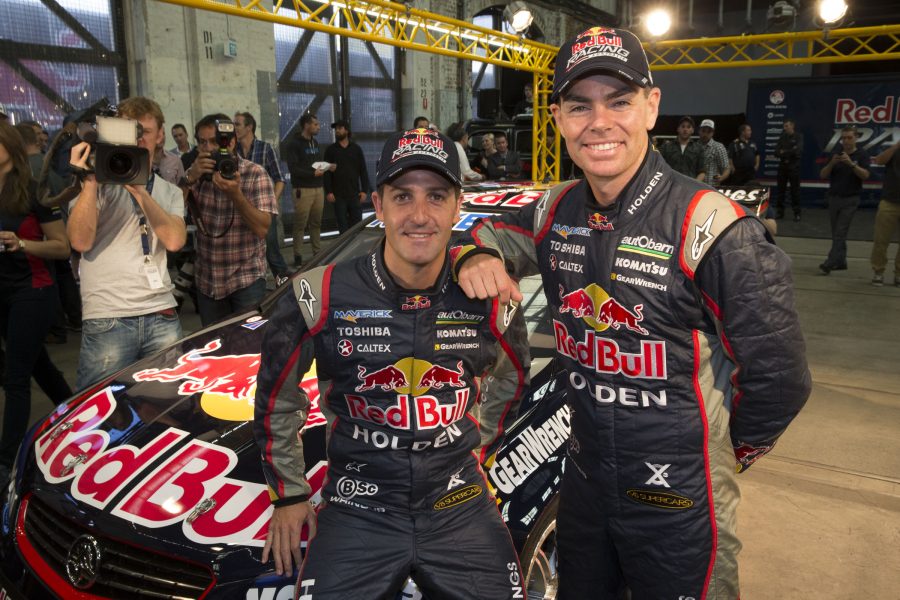 In Whincup, Lowndes has come up against an adversary not unlike Mark Skaife, who usurped him as champion at the Holden Racing Team in 2000.

The parallel between the driven, determined Whincup and Skaife, and the contrast with Lowndes’ naturally-gifted, relaxed style is one that Lowndes himself has drawn.

But while, Bathurst aside, Whincup has often put Lowndes in the shade on track, the opposite has been the case off it.

Lowndes’ popularity with the public has endured, while Whincup continues to be a polarising figure, often not given the respect his record deserves. 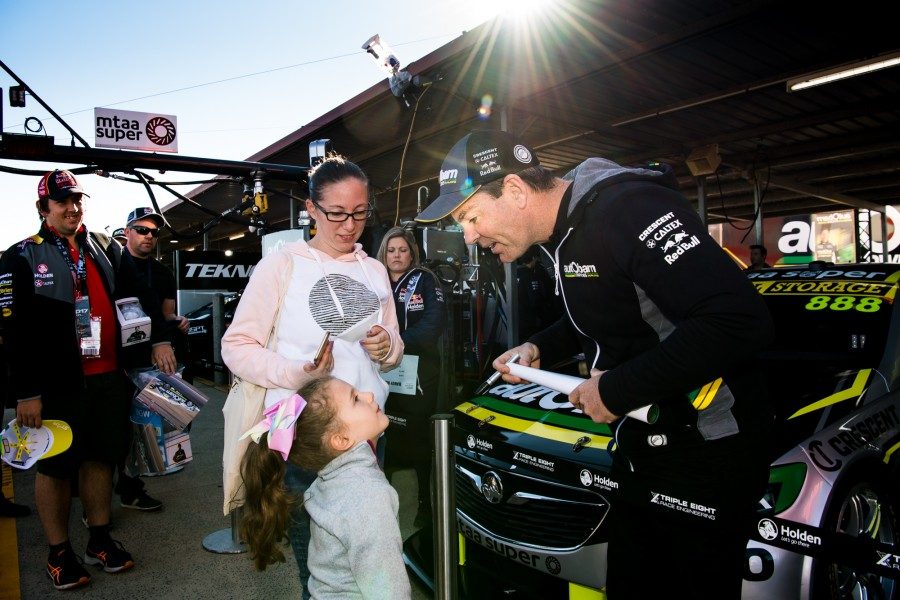 Asked if it’s been tough to be continually compared to Lowndes, outside the car as well as in, due to being team-mates, Whincup said: “No, not at all.

“I really hate comparing, you know... but internally that doesn’t really exist, we work together on and off track.

“But there’s been nothing tough about Lowndesy being the fan favourite.

“I’ve never strived to be the fan favourite, I’ve always just gone out there to represent and do the best job I can and hopefully people enjoy the on-track stuff.”

And one makes three

In 2016, Shane van Gisbergen was drafted in to replace Lowndes alongside Whincup in the Red Bull line-up, triggering the addition of a third car to keep the veteran in the fold. 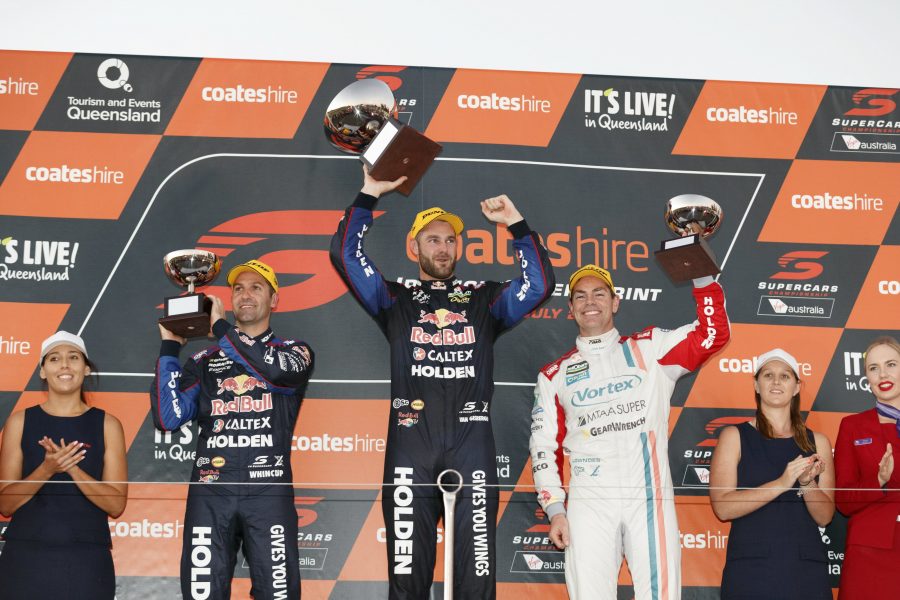 Although a flamboyant, naturally fast racer like Lowndes, the move to Red Bull was somewhat of a culture shock for the shy Kiwi.

His previous team, single-car outfit Tekno Autosports, did little media or sponsor work, operating largely out of the spotlight, aside from when victories commanded it.

Van Gisbergen needed few lessons from his team-mates on-track in 2016 as he swept to the championship, but freely admits he took plenty of cues from Lowndes off it.

“It’s amazing how, even when you’re going shit he’s still happy with everyone in public,” van Gisbergen told Supercars.com of Lowndes.

“We’re completely different people in that regard, [but] I get stuck in a bit more now.

“You pick up the things that [Lowndes and Whincup] do to dance around the big questions as well, they’re very good at that.

“It just comes with time and experience and working with both Jamie and Craig at all the big media stuff has been a big help.” 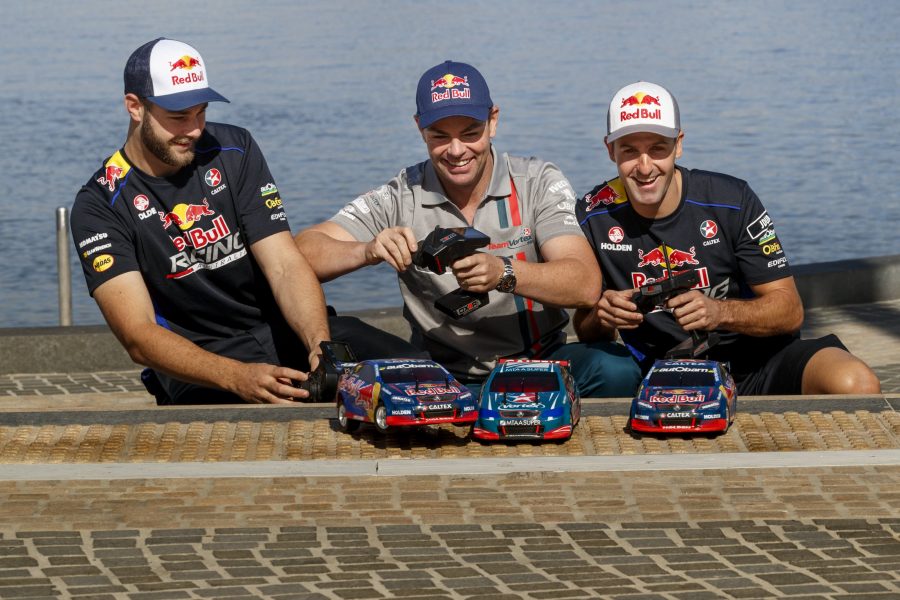 While Tekno fielded a Triple Eight-built car and received technical support, van Gisbergen says he hardly knew Lowndes – or his driving style – before joining the team.

“We got some set-up stuff, but you’re a completely separate team,” he said.

“You get more of a reference when you’re a satellite team, you don’t get the inner depths of how he prepares the lap, prepares tyre and gets everything up to speed.

“His driving style is crazy-different to most people, but very effective. He’s very unique, how he drives.

“Him and Jamie are complete opposites in terms of styles and I’m somewhere in the middle.

“It’s been awesome with both of them, just how open everything is, and it took a while to get used to.

“At my first team (Stone Brothers Racing), everything was pretty shut, you didn’t share too much, you always competed against each other.” 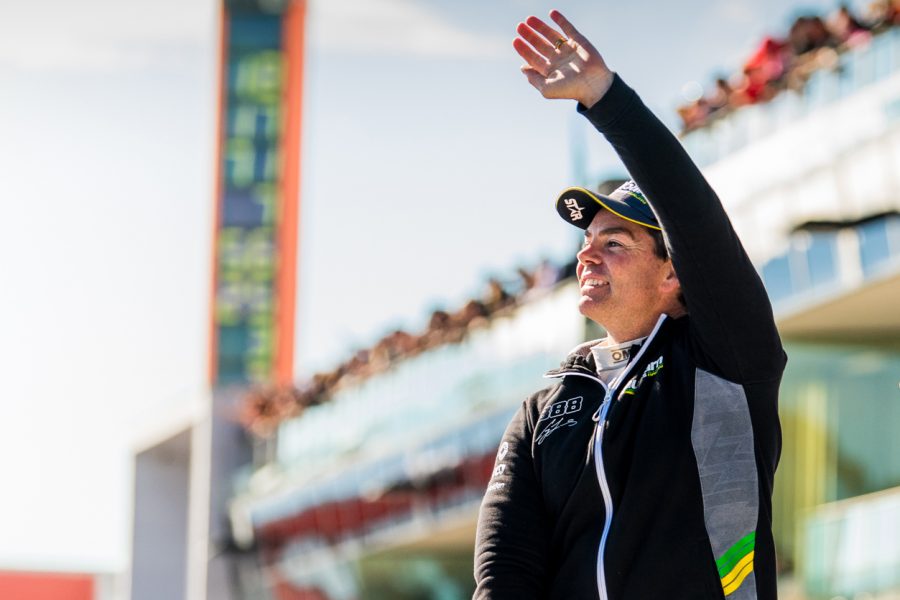 After two tough seasons in Triple Eight’s third garage, Lowndes has enjoyed a resurgence this year.

His pole and victory at Symmons Plains in April broke droughts of nearly three and two years respectively.

Although qualifying form has again occasionally been found wanting, further success at Bathurst and in the three-event PIRTEK Enduro Cup cemented a fine season.

Lowndes enters his final weekend as a full-time Supercars driver in Newcastle fourth in the points, just 58 behind Whincup, and gunning for his spot.

So does Whincup think Lowndes’ retirement is coming too early? 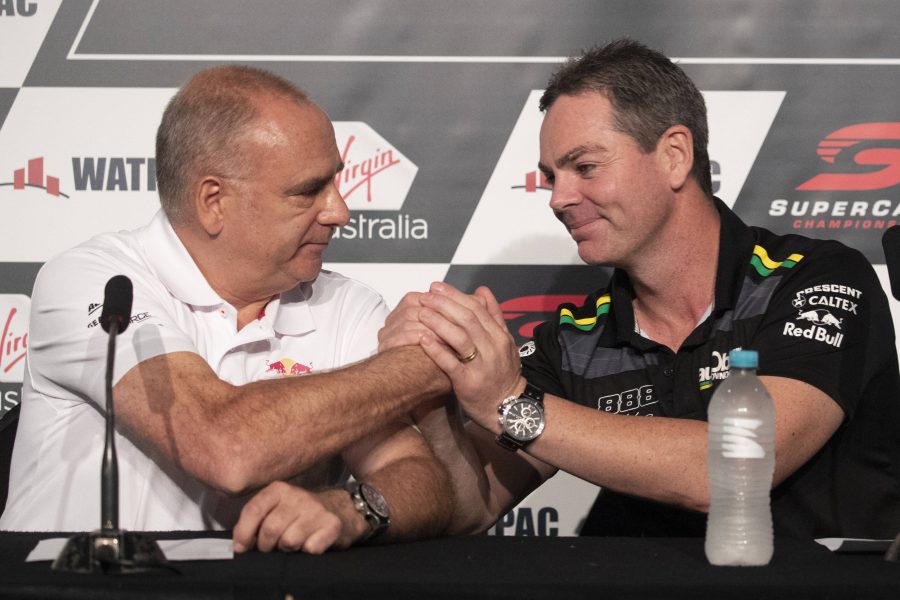 “No one can make that call apart from him and he’s made that call, so it’s the right decision,” said Whincup firmly.

“In some ways we should all stay out of it. We’re very quick to decide when an athlete should retire.

“You only know when you want to move on. Lowndesy has decided that, so it’s the right time and we should respect that.”

What’s left unsaid is the fact Whincup stands to be a beneficiary of Lowndes’ retirement.

They are expected to be reunited for the Enduro Cup next year; the first time they’ve tackled a Supercars event together since primary drivers were split in 2010.

Regardless of how Triple Eight’s final Supercars enduro pairings shake out, Lowndes, Whincup and van Gisbergen will all share a car in February’s Liqui-Moly Bathurst 12 Hour.

It marks the start of what Lowndes hopes will be multiple outings in top-shelf GT races, as he looks to combine television duties with an international racing schedule.