Chaz Mostert says he went down to the rival Erebus garage to talk to Will Brown after his Gold Coast crash because the rookie "doesn't need to feel like crap".

Brown, making his Supercars debut in the PIRTEK Enduro Cup, was running 12th when he crashed exiting the first chicane on lap 23 on Saturday.

Mostert was prepped to get into his Supercheap Auto Falcon, which eventually won the race, but took the time to go and check on Brown when he was back in the adjacent Erebus garage.

"I've been watching Will for quite a while now," Mostert said.

"One little mistake like that, you've seen me do it at Bathurst, you clip the wall and you're talking millimetres, and the car is wrecked and the day is over.

"For me, Will has been an absolute superstar this enduro season and he doesn't need to feel like crap, mistakes happen.

"You've got to get on with it and I really felt his heartbreak, because I know how hard he would be on himself like I have been in those past times.

"I just felt like it was the right thing, to run down before I jumped in the car and just say, 'mate it's all good and just keep your chin up', that is what young guys need.

"He's a really good kid. I always say cars can be repaired, but not drivers, so I'm glad to see he is OK."

Mostert and James Moffat took out the 102-lap race, the first victory for Mostert and Tickford Racing since the corresponding Gold Coast heat in 2017.

Moffat ran third through the first phase, but took a lead the pair didn't relinquish on lap 36, after finishing 10th at Sandown and fourth at Bathurst.

It comes amid campaign in which Tickford has struggled, Mostert starting the weekend eighth in the points with just a single podium to his name.

"Super-pumped for the team," Moffat said.

"It's been a very, very tough, challenging year for Tickford, Supercheap Auto and all our guys.

"I was actually thinking after Bathurst and the way we went at Sandown that it was going to be quite tricky to get [Moffat] a trophy in this enduro season. 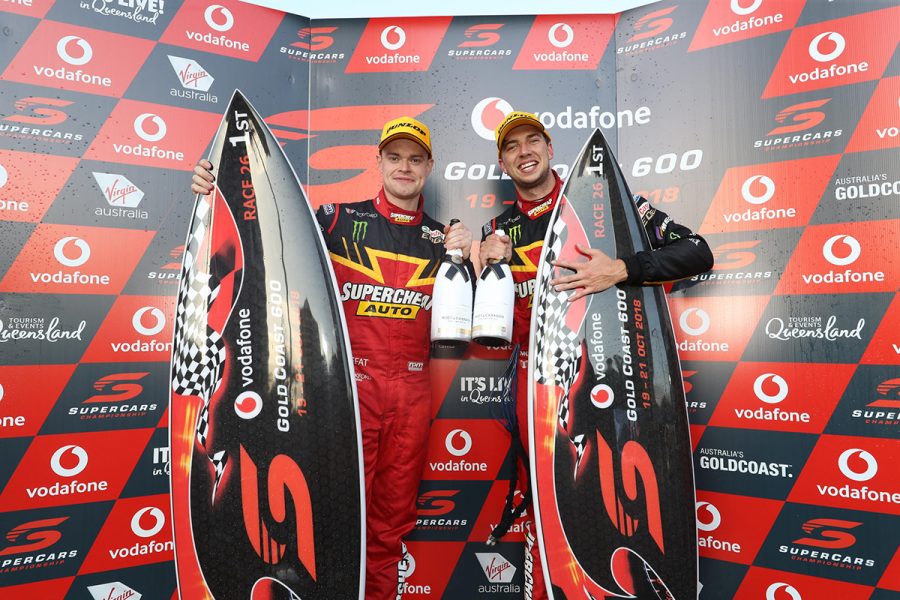 "Give credit to [engineer] Adam De Borre, he really decided to try something different this weekend and it seemed to work pretty well.

"Overall, pretty happy with the car, still got a fair bit of work to do on it. I did the easy job.

"Credit goes to Moff because he did a fantastic job."

Moffat has reverted to co-driving in 2018 after seven seasons as a full-time Supercars driver, most recently spending two years with Garry Rogers Motorsport.

The victory was his second, after winning at Winton in 2013 with Nissan Motorsport.

"Everybody on the team's been working their absolute butts off this year to try and improve their results, and to reward them with a surfboard today, I just can't thank them enough.

"I'm just lucky to be along for the ride with Chaz, we've got one more race tomorrow together, for this year at least, and hopefully it'll have a similar result."