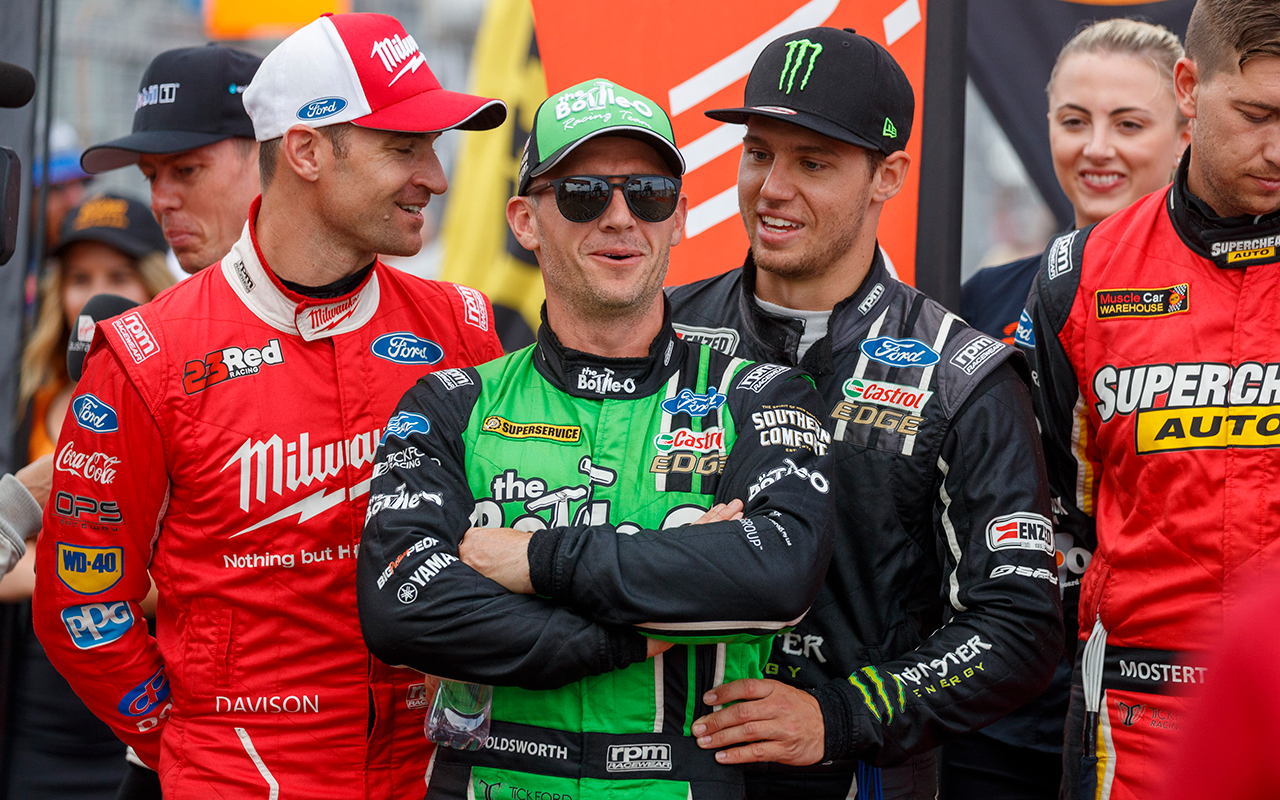 In a year where complaints over parity made headlines, comparisons between teammates took on more importance than ever.

In Part 1 of our analysis, we took a closer look at the combinations at Boost Mobile Racing, Kelly Racing, Brad Jones Racing and Walkinshaw Andretti United. 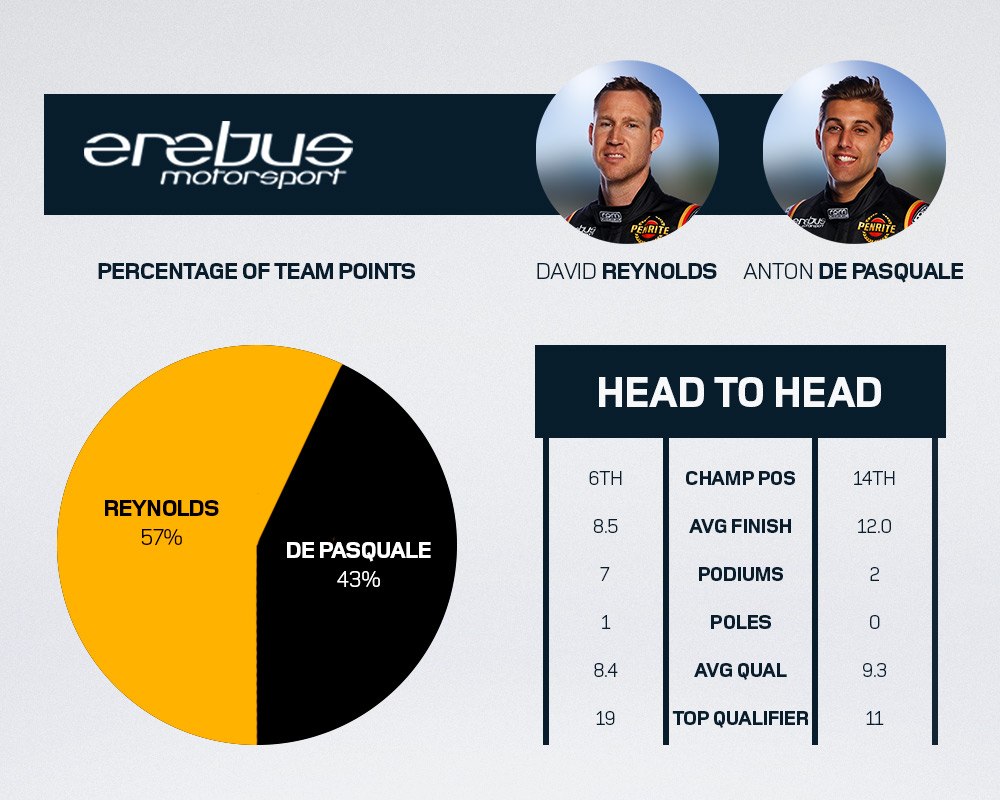 Anton De Pasquale closed the gap to David Reynolds this season, but the 2017 Bathurst winner was still the team’s clear leader.

The final championship standings attest to that; Reynolds sixth and De Pasquale 14th, with a whopping 679 points between them.

Two podiums were highlights for the youngster, but Reynolds picked up seven, and the top 10 finishes stat was also telling; 23 to Reynolds and nine to De Pasquale.

Qualifying though was close, particularly the final averages, even if the 19-11 head-to-head win for Reynolds remained a decisive one.

That said, it’s important to note De Pasquale was trounced 27-4 in the head-to-head last year, and his improved 2019 included outdoing Reynolds in seven of the last 10 qualifying sessions of the season. 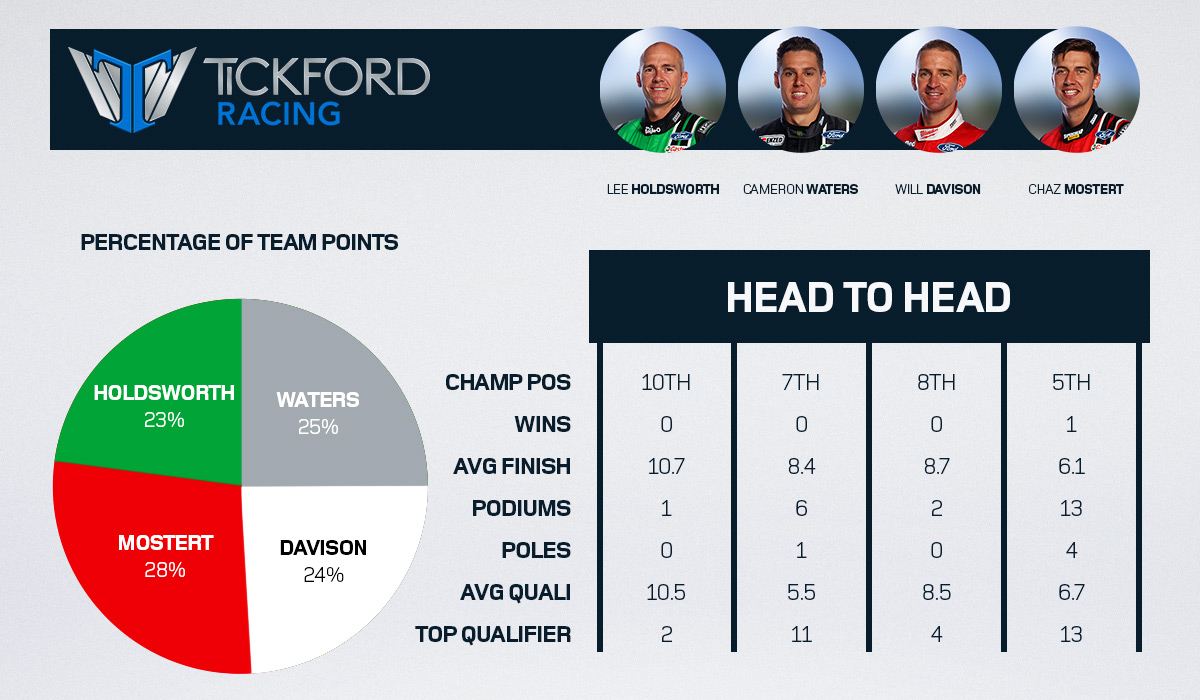 As ever, there was a fair bit to digest between the Tickford teammates in a campaign that will be best remembered for on-track clashes between Chaz Mostert and Cameron Waters.

The team’s new Mustang package meant all four of its drivers finished in the championship’s top 10, having each scored at least one podium.

Mostert was usually the pacesetter and ended up on top in most of the key metrics, including most points, its only win, most poles, podiums and so on.

The Supercheap driver’s inconsistency though wasn’t just reserved for race day, and Waters ended up ahead on qualifying averages, if not the head-to-head.

Will Davison and Lee Holdsworth were rarely the best of the bunch but did both have their moments in the sun, with the latter recovering from a slow start to the campaign. 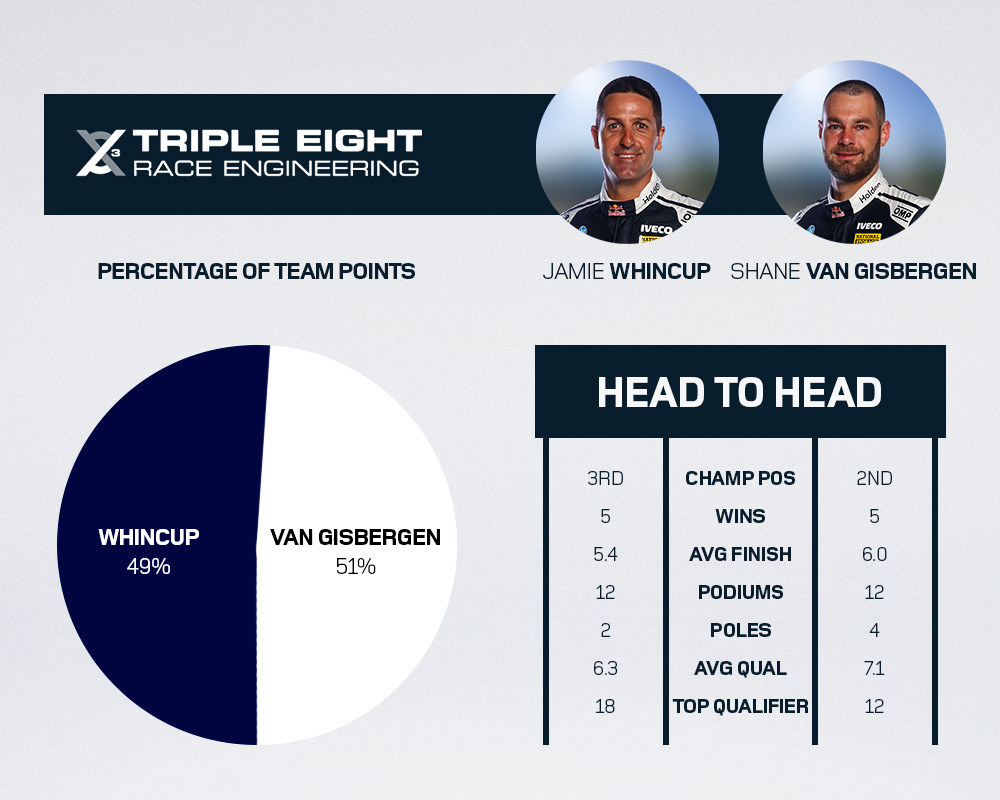 For the third time in their four years as teammates, Shane van Gisbergen came out ahead of seven-time champion Jamie Whincup in the year-end standings.

As the only all-champion pairing in the field, they were again a fascinating duo to watch, this time without a third car for comparison following Craig Lowndes’ retirement from full-time driving.

As was the case in 2018, Whincup had the Kiwi’s measure in qualifying, but not in the races.

Whincup won the qualifying head-to-head a not insignificant 18-12, in a season where the factory Holdens spent a large portion of the campaign searching for pace against the rapid Mustangs.

Their race stats though were remarkably similar; both scoring five wins and 12 podiums, with Whincup slightly ahead on top fives and van Gisbergen on top 10s, countered by two DNFs each. 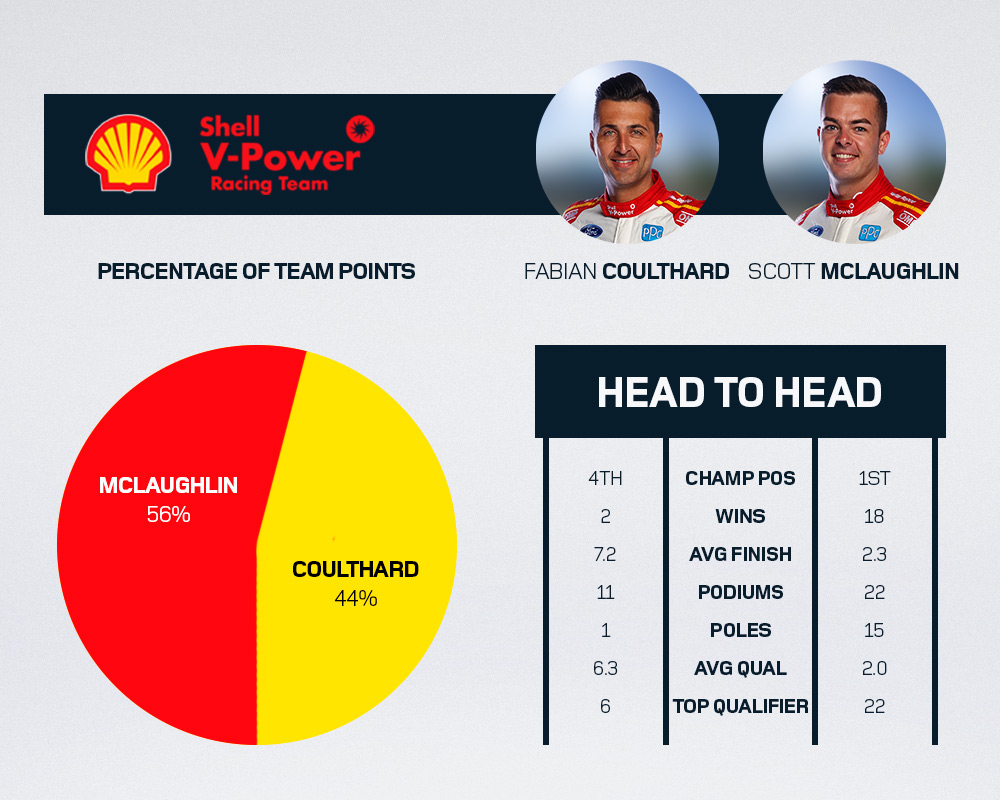 Despite a promising start, it was another season of one-way traffic at Shell V-Power Racing as Scott McLaughlin romped to a second straight title.

It should be remembered, Coulthard made a strong start to the year, putting nine podiums and two wins on the board early in a Mustang more suited to his style than the erstwhile Falcon.

He faded in the mid-season and didn’t truly recover until the Newcastle finale, going 11 races without a podium after Townsville.

Second in the standings mid-season turned into an eventual fourth, 814 points behind McLaughlin – a stat not helped by being relegated to last in the Bathurst results after holding back the field.

But even when the going was good, McLaughlin still comfortably had Coulthard’s measure, and the stats – including 18 wins to two – made for grim reading on the #12 side of the garage.