Several teams claimed they were in the ‘box seat’ for victory if the rain-hit second leg of the Vodafone Gold Coast 600 hadn’t been abandoned.

The mix of pit strategies in the first 43 of a scheduled 102 laps – impacted by a combination of rain, and Safety Car periods either side of a first red flag – made for a complex equation.

So who was really the effective leader of the race when the event was called?

The rules for the 300km Gold Coast encounter stipulated a minimum of 34 laps for each driver and two Compulsory Pit Stops (CPS).

For a stop to be counted as a CPS, at least two tyres needed to be changed.

If the race had reached the required 50 percent distance to declare a result, any car not to have completed the CPS requirements would have been given a time penalty of 52 seconds.

Due to the conditions, officials declared while under Safety Car on lap 38 that the minimum requirement of 34 laps per driver was to be waived.

However, race director Tim Schenken clarified to teams via the race management radio channel that both drivers still needed to drive the car at some point.

At the time the race was abandoned, the #99 Anton De Pasquale/Will Brown Erebus Holden led on the road from the #230 Will Davison/Alex Davison 23Red Racing Ford.

Both cars had only completed one pitstop – and did not change drivers – ensuring they each had a pitstop still to do.

The third-placed Andre Heimgartner/Aaren Russell Nissan had completed a driver change, but had also done only one stop. 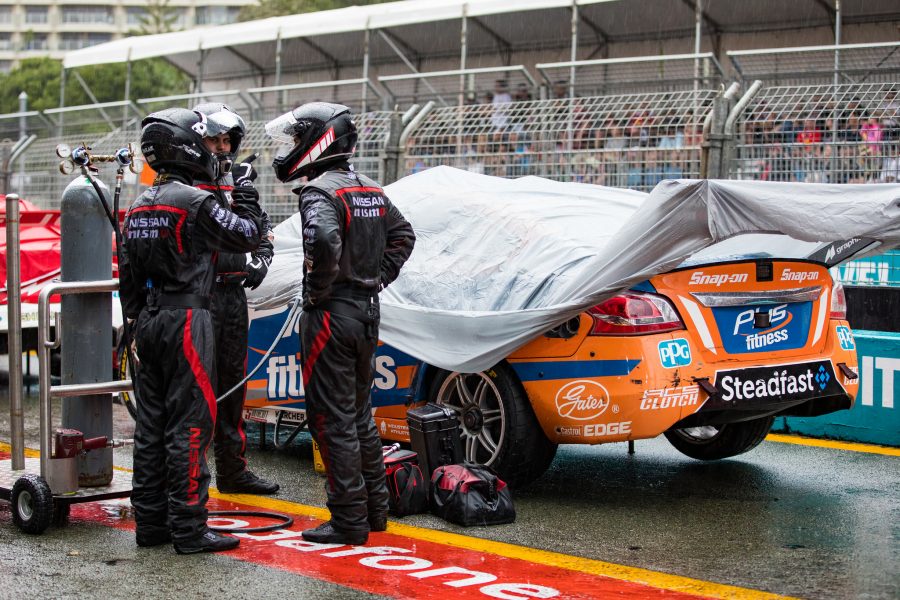 The Plus Fitness Nissan being sheltered from the rain

Fourth-placed James Courtney/Jack Perkins were therefore the first of those to have stopped twice and completed a driver change.

However, their second stop – undertaken under Safety Car on lap 34 when Perkins handed over to Courtney – did not include a change of tyres, ensuring they too had a stop to go.

The effective leader was therefore Saturday winners Chaz Mostert/James Moffat, who were fifth on the road but first to have completed the CPS requirements.

There was however a caveat on Lowndes/Richards, as two earlier incidents were pending investigations, and highly likely to result in penalties.

The David Reynolds/Luke Youlden Erebus entry was between the Shell Ford and Red Bull Holden in the queue, but like Courtney/Perkins, had not taken tyres at its second stop.

Those details were not lost on Tickford Racing boss Tim Edwards, who told television crews immediately after the stoppage that he felt Mostert and Moffat were the effective leaders.

“Ifs, buts and maybes; we didn't finish the race,” he shrugged. “[But] it’s kind of gut wrenching, a little bit.” 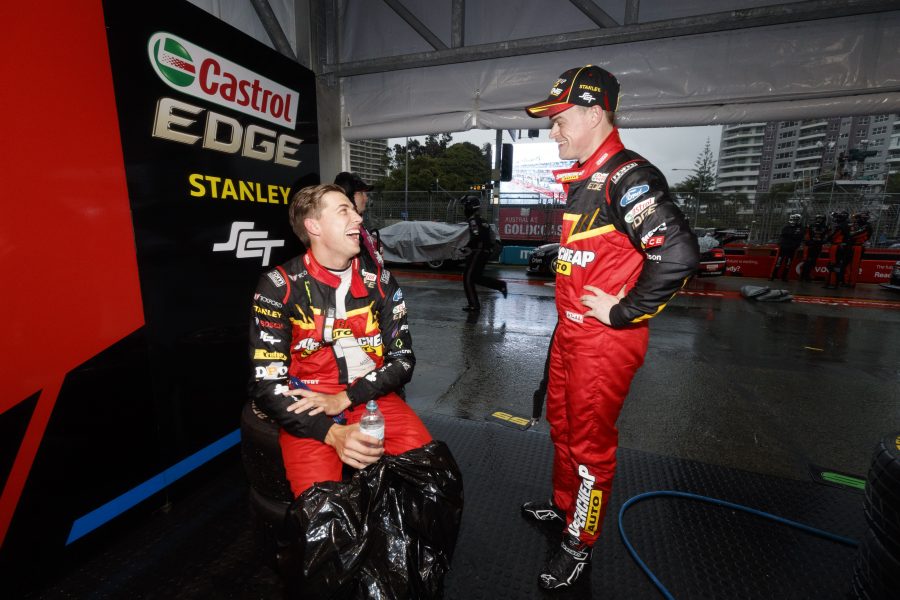 The Saturday winners were also well placed on Sunday

The rest of the effective order was likewise determined by which teams had seen the benefit of changing tyres, and therefore ticking off their second CPS, in the rush of stops when the originally mandated number of co-driver laps was reached while the field was under Safety Car on lap 34.

Garth Tander/Chris Pither, Lee Holdsworth/Jason Bright and Tim Blanchard/Dale Wood were 10th through 12th on the road when the race was abandoned, but had not taken tyres back on lap 34.

However, like Lowndes/Richards, there was also a question mark over this car having been released into the path of Scott Pye/Warren Luff in pitlane, for which an investigation was outstanding.

Fabian Coulthard/Tony D'Alberto were sixth in the effective order but could be considered to have been as high as fourth, in the likely event that cars #888 and #5 were to be penalised.

Interestingly, the second Tickford garage, which houses the Richie Stanaway/Steve Owen and Cameron Waters/David Russell cars, hadn’t changed rubber on either entry when they pitted on lap 34.

Those cars did, though, come back in for tyres during the brief period between the first and second red flags, meaning the team had all four of its Falcons in the effective top eight at the second stoppage.

Ultimately it meant nothing, as race control deemed the track was unsafe for racing – a decision seemingly supported by all drivers, bar one.

“It was clearly unsafe out there, but Richie was on the radio pleading for the race to go because he wanted to have a bit of a play in the wet!” noted Edwards.

As the race did not reach its 50 percent distance, the abandonment meant no results were declared, and no points awarded.