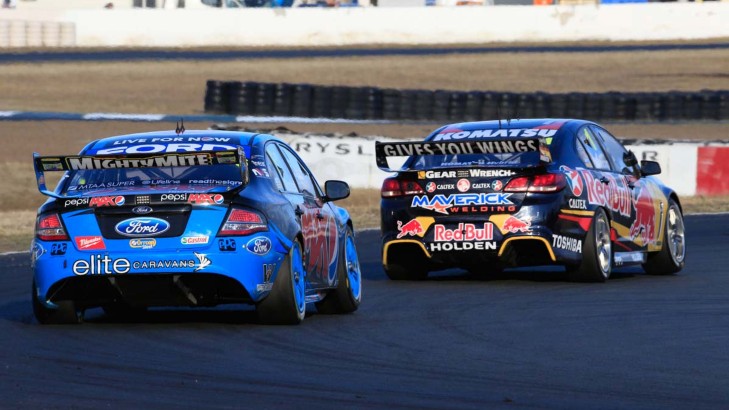 Holden's Jamie Whincup has declared his Ford rival Mark Winterbottom is still the man to beat despite his sudden and methodical charge into the V8 Supercars Championship lead. For the second day running Whincup benefited from others' misfortune as he stormed back into the Championship lead for the first time in five months.

As Holden Racing Team's James Courtney continued his exceptional recent form with a convincing Sunday win at the Coates Hire Ipswich 400, Whincup might well have had a big grin on his face when his main rival Winterbottom shredded a tyre on lap 22.

It left Whincup on his own building points as Courtney went on for a comfortable victory ahead of Whincup's Red Bull team-mate Craig Lowndes and Winterbottom's FPR stablemate Chaz Mostert.

The two were dicing within the top 10 when Winterbottom's rear left tyre exploded. At that moment the Championship lead, which at the start of the weekend was 96 points, had gone. By day's end Whincup was 15 points ahead.

But it was not enough for Whincup to believe he was now the favourite to win come December, despite others trying to convince him otherwise.

"I just respect the FPR guys. They were 200 points up the road for a reason, they did a bloody good job. That's why I still think they are the team to beat. A bit of respect is due," said Whincup.

"He (Winterbottom) was competitive no doubt in that race. He may have beaten on us on raw pace and he is still the man to beat. His confidence will still be sky high and we are going to have to do a great job at the end of the year.

"The competition is unbelievably strong at the moment and only going to get stronger. To be ahead of that bunch is a really hard thing to do."

Winterbottom's tyre drama appeared almost identical to that of FPR team-mate David Reynolds who earlier in the race blew a left rear between turns two and three. It prompted other teams to advise their drivers to be careful on the turn two exit to avoid a drop-off from the kerb.

"There's not much you can do about it once the tyre goes. Anything can happen, so you just keep fighting so you finish," Winterbottom said.

"It's a bit of a shame because the car was pretty good in that second stint, so I think we would have been okay in that last stint, but we didn't get very far when the tyre went. Frustrating, but you just try and finish and keep pushing at the end for positions.

"It's just a bad day for us, that's all ... you never write yourself off, you can always get it right on the day when it's right. We're going to have to work hard to fix some of our weaknesses which will show up at (next round) Eastern Creek."

Not since he won the first race of the year at Adelaide's Clipsal 500 has Whincup held the Championship lead. He dropped down as far as seventh and then hovered around fourth and fifth before five victories in the last eight races.

In contrast Winterbottom had led the Championship since New Zealand in April.

Courtney is also becoming a threat and is now only 192 points away. Lowndes is 162.

"When you have got it like that and you can see yourself creeping away from the field, you can relax yourself and control the situation," Courtney said of his race. "It is becoming easier for us to be qualifying up the front and racing at the front whereas years gone by we have been wobbling around midfield.

"We have got the roots in and the thing is starting to grow. It's been a long building process."

The great run of the Norton Hornets Nissan team continued when James Moffat, starting from ARMOR ALL Pole Position, had a stellar race for fifth, almost pipping Mostert on the last lap. The Norton outfit chose a slightly different strategy than most choosing for a larger fill at their first stop.

He went wide while pushing Mostert which then let Scott Pye through for the career best fourth for the Wilson Security Falcon prepared by the might Dick Johnson Racing outfit.

Moffat set numerous lap records in the race but the strategy call, and another from Courtney's team to save a spare set of new tyres, may have ultimately cost Moffatt challenging for the lead.

The son of the great Allan Moffat, blasted his career first ARMOR ALL Pole Position; the first time since his father's last in 1984 at Surfers Paradise.

The next V8 Supercars event will be the Sydney Motorsport Park 400, from August 22-24.