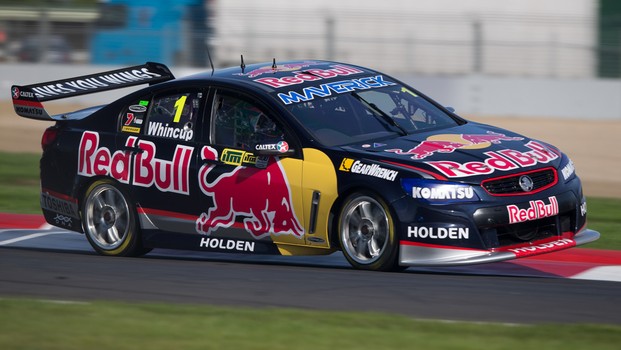 Defending V8 series champion, Red Bull Racing Australia driver Jamie Whincup, has broken through for his first win of the season in the second race in Auckland.

Whincup survived a nudge from Ford rival Mark Winterbottom on the last lap of the 100km race at Pukekohe Park Raceway to take victory and maintain his lead in the series standings.

Winterbottom's Ford Performance Racing teammate Will Davison was 1.35sec behind in second while Holden Racing Team's Garth Tander was third.

Whincup's triumph was the 22nd win by a Holden driver in 23 races at Pukekohe.

The Holden Commodore VF driver took the lead on the 12th lap of 35 and held on to triumph in front of home fans.

The Christchurch-born 19-year-old took the chequered flag in his first season as a full-time V8 Supercars driver after winning the development series title last year.

Jason Bright was second and Craig Lowndes third to complete a podium clean sweep for Holden.

Kiwi duo Shane van Gisbergen and Fabian Coulthard were next over the line in a strong showing by the New Zealand contingent, who make up just four of the 27 drivers in the field.

There will be another two races of 100km each on Sunday.

Jamie Whincup  ›
15' Red Bull Racing Australia ›
2013 ITM 400 Auckland  ›
Stay In The Know
Sign up to the Virgin Australia Supercars Championship Newsletter
We use cookies to ensure that we give you the best experience on our website. If you continue to use this site we will assume that you are happy with it.Ok