Jamie Whincup has opened his mission for a record eighth Supercars title with a comfortable victory in the first leg of the Superloop Adelaide 500.

The Red Bull Holden Racing Team star, who announced last night he will drive on into 2021, launched off ARMOR ALL Pole to control the race from the start. 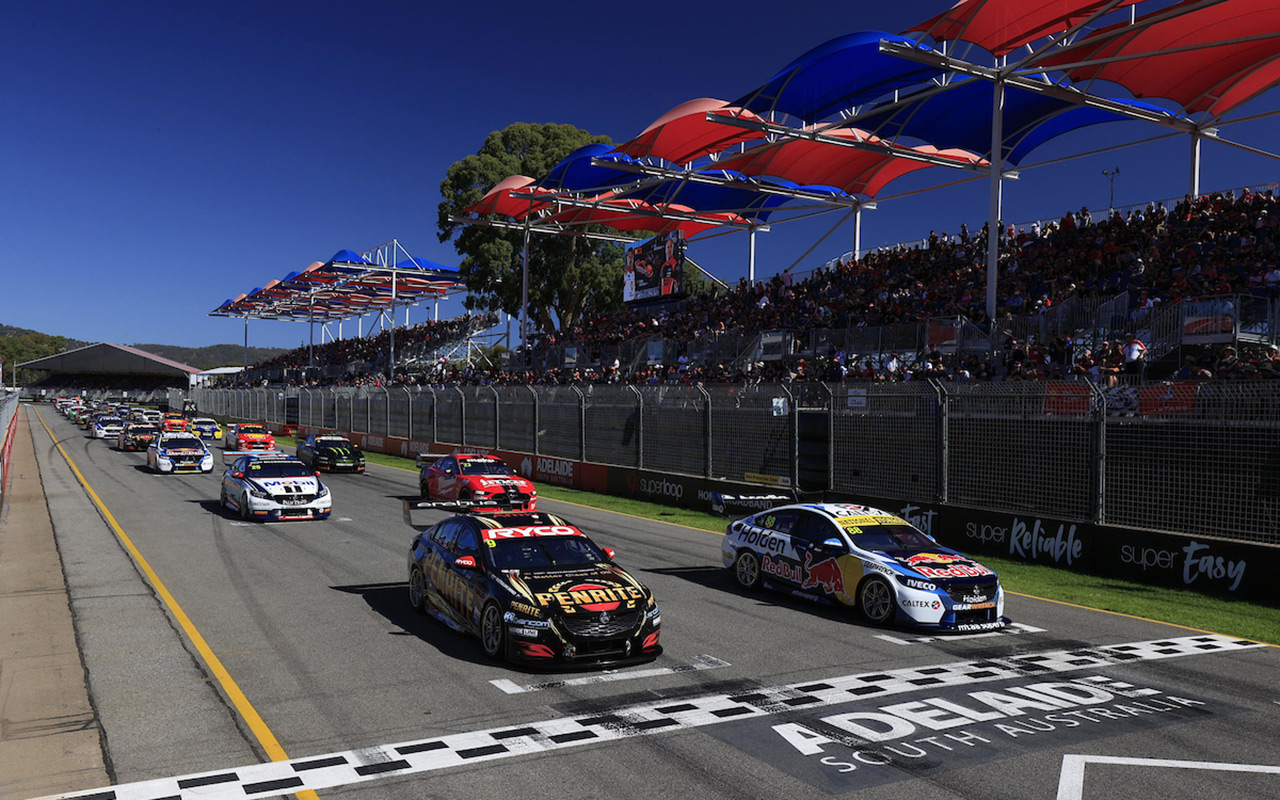 The defending champion benefited from a savvy strategy by his Shell V-Power Racing crew, pitting him from seventh on lap seven.

The #17 Mustang made inroads in clear air to lead the race through the middle phase of the race, before ceding the effective lead to Whincup in the second round of pitstops.

That allowed Whincup to drive off into the distance to seal his 119th win, cruising to the chequered flag with a final margin of more than five seconds.

"I had a rocket today," beamed Whincup. "The car was excellent, we made the most of pole position.

"These boys [Shell V-Power Racing] are fast, but obviously we had track position, we were up the road a little bit.

"I've got to dedicate this one to Holden; it's been a bloody tough week for everyone involved and great to get a win.

"We got smoked by the other brand [Ford] here last year, so it's nice to bounce back."

McLaughlin and Shane van Gisbergen were left to engage in a scrap over second through the final 25 laps, the former managing to prevent a Red Bull one-two.

A podium for van Gisbergen was a fair recovery from sixth on the grid and running fifth through the opening stint.

Reynolds was forced to settle for fourth, not far ahead of hard-fighting trio Will Davison, Cameron Waters and Chaz Mostert.

Davison and Mostert’s battle immediately after the first round of stops was arguably the highlight of the race.

The 23Red Racing veteran spent more than a lap defending vigorously against Mostert’s advances, finally getting some breathing room when the #25 Holden copped a bump from Waters behind.

Among the feel-good stories was Rick Kelly finishing ninth in his team’s first race with Mustangs; teammate Andre Heimgartner two spots further back.

Todd Hazelwood meanwhile was the day’s biggest mover, improving from 23rd to 13th.

The afternoon was not so productive for his Brad Jones Racing teammate Nick Percat.

The field got through the first racing lap of the season rather cleanly, aside from Percat coming unstuck.

“On the warm-up lap when I was warming the tyre left to right, the whole [steering] rack shifted,” Percat explained.

“Because I’m mental, I decided to try and start the race and just survived.

“I thought it was just a power-steering failure turning one direction; obviously the rack was falling out.

“At the start I just aborted ship because I couldn’t get through the staircase.

“I was getting pushed and shoved, and that’s why I went down the escape road and just cruised back.”

Percat returned some nine laps down; by which time Garry Jacobson had found himself as 2020’s first DNF.

Jacobson, who was fined on Thursday for a practice clash with Lee Holdsworth, hit the Turn 8 wall; a fate that would also meet James Courtney for the third time in three days.

“I just came up behind Heimgartner I think it was in the Mustang and just had crazy aero push,” Courtney said.

“I slowed up a lot thinking it was going to come but just nothing, it didn’t turn.

“It’s disappointing, it’s my bad so I feel sorry for all the boys that have put in crazy hours.”

It was a tough overall debut for Team Sydney with Chris Pither bringing his Coca-Cola Commodore home in 19th.

Best of the rookies was Zane Goddard in 18th, with Jack Smith 20th and Bryce Fullwood five laps down after losing out in a clash with the Turn 11 fence.

It was an eventful afternoon for Smith, missing the pit entry for his second stop, copping a drive-through penalty for disobeying blue flags and spinning down an escape road.

Another 150 championship points will be up for grabs in Sunday’s race from 3:20pm local time.