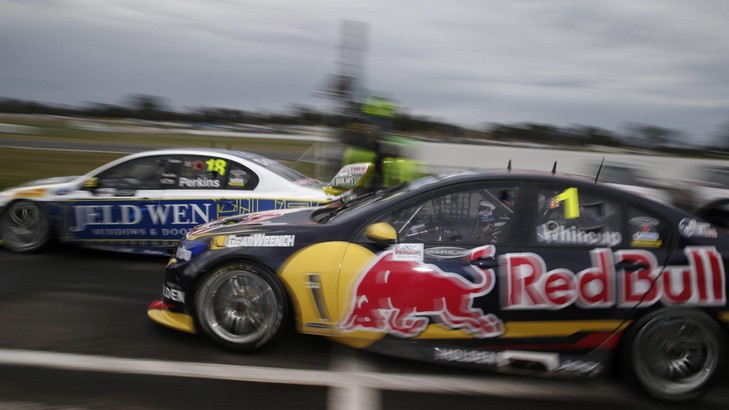 Red Bull’s Jamie Whincup knows he is dangerous territory after qualifying only 14th and 21st for today’s Race Seven and Eight of the V8 Supercars Championship at the Winton 400.

The five time Champion blamed set-up issues with his Triple Eight Holden Commodore that made it impossible for him to maximise the narrow high-grip groove in the race track that resulted in the field qualifying under the old lap record.

Teammate Craig Lowndes, who leads Whincup by 70 points in the Championship chase, will start from fourth position in Race 7, but slumped to 23rd fastest in Race 8 after making a set-up change that backfired.

Whincup’s season has been marred by a series of run-ins with other drivers including Nissan’s Michael Caruso at the Clipsal 500, Volvo’s Scott McLaughlin at the Formula One Rolex Australian Grand Prix and Lowndes last weekend at the Tyrepower Tasmania 400.

“I have had more contact with cars this year than I have in the last five years but hopefully that is behind me,” Whincup told v8supercars.com.au. “The idea is to keep it clean but turn one-two here is crazy tight and crazy difficult.

“So we are in a massively vulnerable position for contact and a DNF but we will do our best to keep it clean.”

Qualifying was complicated by the high-grip sealant that created a narrow racing groove around the track. Whincup said he couldn’t stay on the “railway tracks” in any of his quick laps.

“It’s been a massive challenge for us with the massive change in track conditions,” Whincup admitted. “We didn’t expect that, it was completely out of the unknown. But it’s no excuse, it’s the same for everyone.

“We had to adapt and we didn’t adapt as quick as we should have.”

Whincup, who qualified on pole for all three races in Tasmania, said his results were a reminder of just how quickly the balance of power can swing in the highly competitive V8 Supercars formula.

“That’s the game we play. If you don’t quite get it right then bang right down the order, which is what happened to us today.

“In all our runs the car would very easily get off the railway tracks. We made a small change and made the car better … but it was difficult to drive."

Lowndes faces the task of driving through from the back in Race 8, and is hoping to repeat his charge from 25th to fifth in Race 5 at Symmons Plains.

“We made an adjustment trying to make the car a little bit better for the sticky conditions but we went the wrong way and I had massive understeer,” Lowndes explained.

“We will do it like Tassie and make the best of what we have got.”

Fabian Coulthard starts from ARMOR ALL Pole Position for both this afternoon's races, with the first beginning at 2pm local time.

Jamie Whincup  ›
15' Red Bull Racing Australia ›
2014 Winton 400  ›
Stay In The Know
Sign up to the Virgin Australia Supercars Championship Newsletter
This website uses cookies to improve your user experience. By continuing, you will be providing your consent to our use of cookies.Ok