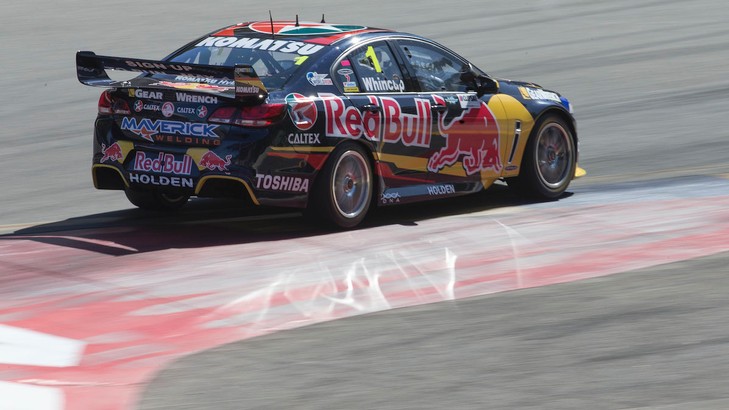 Jamie Whincup has opened his 2014 V8 Supercars account with a clear win at the Clipsal 500 Adelaide, but has warned it’s all bets off for this evening’s twilight race.

“We haven’t raced here so late, so the track temperature will be down and that will make it a different track to what we have experienced,” the five time and defending V8 Supercars Champion told v8supercars.com.au moments after his win.

“I am sure everyone is going to step up now so we have to improve as well.”

Whincup was unhappy with his Red Bull Holden Commodore’s set-up after the sydney.com pre-season test two weeks ago and was still not satisfied despite yesterday qualifying first and third for the two 125km races. But his crew led by new race engineer Dave Cauchi had solved the issues.

“The car was much better today,” Whincup said. “We weren’t sure after the test day where we are at, but clearly the boys have done a sensational job stepping up.”

Whincup was happy with his win, in which he held off a late charge from teammate Craig Lowndes, while Team TEKNO VIP Petfoods driver Shane van Gisbergen in another Triple Eight-built Commodore was third.

“It’s going to be a long hard battle,” Whincup said of the Championship, “but it’s good to come out of the blocks firing.”