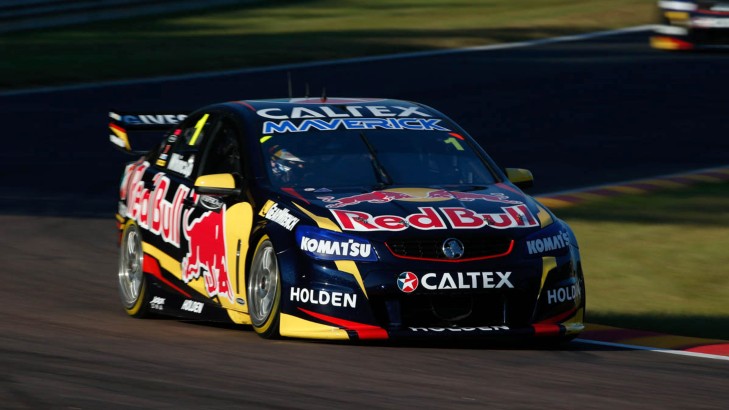 Jamie Whincup's chances of becoming the first driver to sweep the SKYCITY Triple Crown in its 16 year history rest on the durability of his soft tyres - and he knows they may not last the distance.

Whincup won the hard tyre 100km Race 17 and 18 at Hidden Valley yesterday in his Red Bull Racing Australia Holden Commodore VF, but for today's 200km Race 19 each car in the field has been allocated two sets of soft Dunlop control tyres, and the use of their existing rubber.

Red Bull Racing has struggled for soft tyre pace this season and Whincup says he is not confident the issue has been resolved despite a major test at Ipswich Raceway earlier this month.

He said no progress on soft tyre setup had been made at the test and described the team's issues as "significant".

"That's why I am not making any big predictions, it could be a completely different ball game (today)," the five time and defending Champion told v8supercars.com.au. "Wish me luck."

Because of a set tyre allocation for the event and the belief that the soft tyres will fade quickly, Whincup and most of the field will have to spend some of the 69 lap race on the best of their used hard compound tyres. A minimum two pit stops are required in the race.

"We need to use three sets of tyres (in Race 19) on because both sets of softs will be completely shagged and we have got to use something else," Whincup explained.

He expects the vast majority of the field to start on hard tyres, then swap to softs at the first fuel stop and continue on with them to the end.

But he said starting on softs was a viable alternative.

"Some people might want to get a good start, belt through the pack and get track position and throw the hards on. Then you would see the tyre life on your softs, actually see how long they last so then you know when to take the hards off because you know how long it is going to take to the end.

"If you put your hards on first then you might make that wrong call."

He dismissed a third radical strategy of sticking on softs for the entire race and simply rotating tyres at a pit stop.

"That's definitely no good. The tyre will be worn out, in 20-25 laps the soft tyres will be on the canvas front and rear."

Some cars may have an advantage in today's race because they have retired from a race yesterday or elected to run on old tyres, therefore delivering them a fresh set of hard tyres to use today.

Whincup said if any of those cars - which include the factory Jack Daniel's Nissan Altimas of Rick and Todd Kelly - qualify near the front they will be handed a significant advantage for the race.

"If they qualify well they will be out of there. They will be two seconds a lap faster and off they go," he said.

The allocation of tyres for Hidden Valley was decided upon by the V8 Supercars Commission, which controls the sporting regulations of the category and includes team representatives.