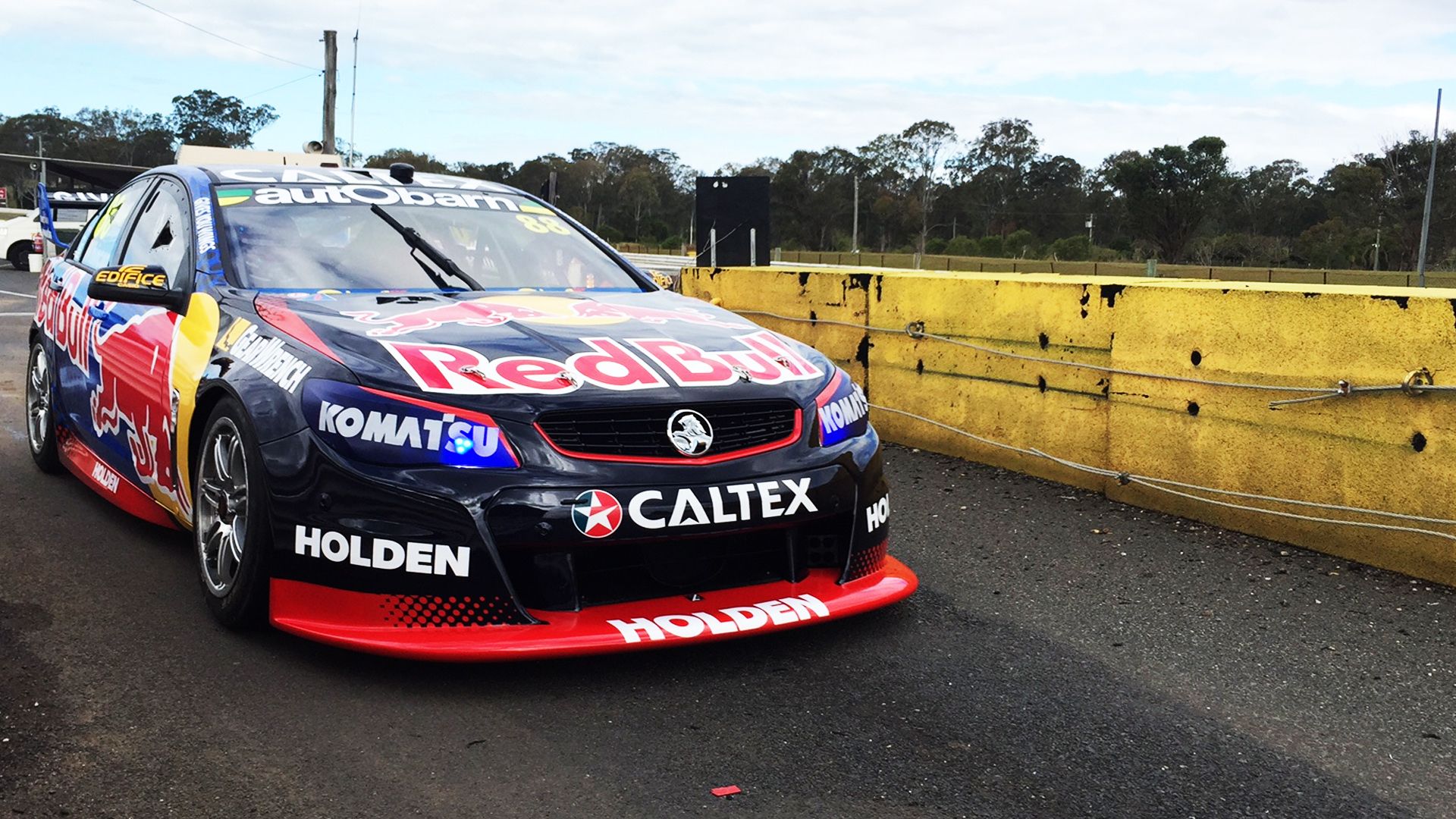 Virgin Australia Supercars Championship leader Jamie Whincup has successfully shaken down the new Holden Commodore VF he will race for the first time at the Red Rooster Sydney Motorsport Park SuperSprint on August 26-28.

Officially Triple Eight Race Engineering chassis 888A-43, Whincup has named his new car Alana. It replaces Jen, or 888A-40.

Whincup undertook the 60km shakedown at the Lakeside circuit north of Brisbane yesterday and reported he’d encountered no real dramas.

“The shakedown was excellent,” he said. “We rolled out and did a full systems check, and there were only some minor little electrical issues that we fixed very quickly.

“By the end of the day, Alana was running very smoothly and I am looking forward to Eastern Creek next weekend.”

However, he admitted that he hadn’t been able to explore the car’s performance potential or how it feels compared to its predecessor because of noise restrictions at Lakeside.

“We never did any set-up changes or really went to 100 per cent,” he confirmed. “It was more doing a systems check and making sure I felt 100 per cent in the car. We were able to tick all those boxes and finish the day very happy.”

Both van Gisbergen and Lowndes started the year with new cars. Whincup traditionally upgrades at the Wilson Security Sandown 500, but the timing was brought forward this year because of the gap created in the calendar by the cancelation of the Kula Lumpur event.

The Holden Racing Team will also debut a new Commodore for Garth Tander in Sydney, while Preston Hire Racing’s new VF will race for the first time in the hands of Karl Reindler.

As is dictated by the tightly controlled NewGen technical regulations, Alana is an evolution of what’s come before rather than a revolutionary new design, Whincup confirmed.

“There are no major changes to the general car at all. There has been a heap of refining but nothing worth mentioning. It was mainly about refining what we had in Jen that bit further really, whether that turns into lap time or not, we aren’t sure, but every car you build always goes one better, so let’s see what we can do.

“Obviously you hope that every new car is better than the last, at the end of the day there’s really nothing wrong with Jen either, she did a great job for us. A new car is a great feeling, it’s somewhat a placebo which you take. Everything is nice and brand new.”

Whincup said finding speed in the new car would come from working with his team-mates on set-up, rather than hoping it would be intrinsically faster than its predecessor.

“There is speed to find across all three cars to be honest. Look, it would be nice to find speed in the new car, but really the game is all about the set-up in the cars. That’s motorsport, you never find the limit. You spend your lifetime trying to find the ultimate set-up.”

While some of his rivals spent the break overseas, Whincup revealed he had stayed in Australia “just crashing into everything I could find.

“I thought I would take time off and visit the snow, I spent more time off the board than on. Then I went to take my bike out and shunted that, luckily I was unharmed, just a bruised ego,” he said.

“The break for me has just been a whole heap of down time combined with working with the engineers on our performance.”