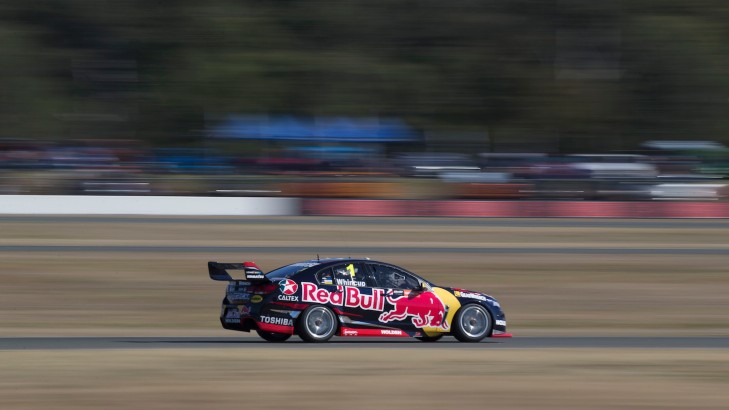 V8 Supercars fans know never to write off Jamie Whincup, but his title defence suffered another blow today when he was unable to maximise his one opportunity to test his Red Bull Racing Australia V8 Supercar.

The team says his new chassis - plagued with vibration issues - will be all good for Sandown next week, despite losing a large chunk of testing time at Queensland Raceway today.

Engineer Mark Dutton described the day's running as an extended shakedown, rather than an opportunity to focus on performance. But despite the limited running, at this stage the plan was to push forward with the new car and fix the issues back at the workshop.

"Not the ideal lead up you'd plan for -I've never been at a test day where we've done so few laps on a car," Dutton told v8supercars.com.au.

"But that said, we're confident we can have it in fine form for Sandown."

On the vibration, Dutton said: "They can be little buggers to find sometimes -and pinpointing it was a nightmare."

While he admitted missing track time today was costly, Dutton wasn't making any excuses and believes the team had still made progress throughout the day, with #888 running smoothly.

Although Whincup's co-driver Paul Dumbrell didn't get the usual opportunity to acclimatise to the car, he is doing plenty of racing in the Dunlop Series and knows both the team and the car like the back of his hand. He and Whincup have won the last two Sandown 500s, in 2013 after debuting a new chasis.

"It's not ideal, but in the same token, it's QR so we didn't intend on spending all day tuning to the track," Dutton said of the lost time.

"That said, we still have effectively not done a day everyone else has done, so it is costly. How much, is yet to be seen. I'm not using that as an excuse -we worked with each other over the two cars and look forward to Sandown."

On the other side of the garage, Craig Lowndes and Steve Richards both had the opportunity to run in #888, with Richards spending much of the day in the car to get comfortable. Lowndes described the test as "huge" in the lead-up.

TEKNO Autosports also featured on track today at Queensland Raceway, and co-driver and team boss Jonathon Webb was pleased with the day's progress.

He and regular driver Shane van Gisbergen featured heavily in the enduros last year and after dusting off the cobwebs and working on the car balance, Webb was confident the #97 STIX Darrell Lea Commodore could factor at the Wilson Security Sandown 500 next week.

"It was good just to get comfortable in the car - just run around, make sure everything feels at home again, which it did," Webb said.

"I think as far as pace I'm where I need to be to be competitive next weekend."

While the team has suffered from mechanical setbacks at the last few rounds, Webb was hopeful that was behind them.

"You go through everything top to toe and makesure the car was going to be first, fast, and secondly reliable during the endurance races.

"I certainly don't have any doubts - we've pulled strong as a team before for these endurance events and no doubts we can do it ... Shane walked away with a smile which is where he needed to be after a couple of average rounds."

While Erebus Motorsport was scheduled to test today, the team decided to postpone, believing the turnaround to Sandown -which begins next Friday -was too tight. The team may use its final test day prior to the Supercheap Auto Bathurst 1000 in October.

Walkinshaw Racing will test at Winton on Thursday, with Lucas Dumbrell Motorsport the final team to test pre-Sandown on Monday.