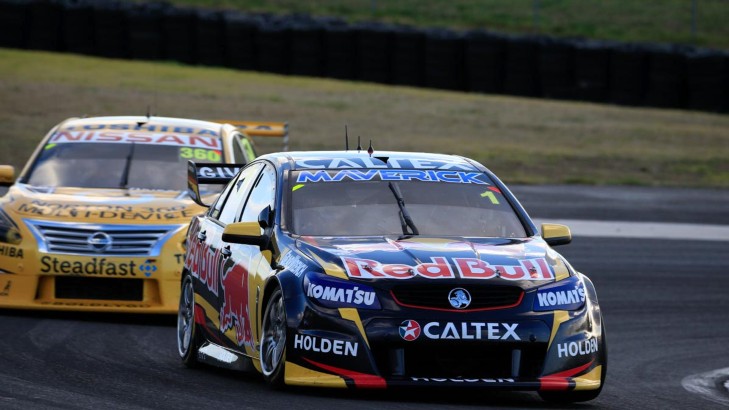 An unhappy Jamie Whincup believes the oil smeared across the windscreen of his Red Bull Holden Commodore cost him a podium finish in Race 28 last Sunday at the Sydney Motorsport Park 400.

But what has most perturbed the five-time and defending V8 Supercars Champion is why the oil got smeared in the first place.

There was supposed to be a "solution" in place to disperse the oil leaking from the transaxle of James Courtney's factory Commodore, but it didn't work when Whincup activated his windscreen wiper and he instead effectively blinded himself for 25 laps of the 200km double points mini marathon.

"I should have been able to clean the screen and driven on happily ever after but that didn't happen," Whincup revealed to v8supercars.com.au.

Just why Whincup smeared the oil across his screen was a subject of discussion on the race telecast, but at that stage no-one outside the team knew what the true story was.

"And an opportunity come up - it may never have come up, it may happen once every 10 years - and it did on Sunday and the solution didn't fix the problem. That's disappointing.

Whincup said his opaque windscreen slowed his second pit stop, which then had a knock-on effect for his race position. He was jumped by BJR teammates Jason Bright (BOC Commodore) and Fabian Coulthard (Lockwood Commodore) to drop from fourth to sixth.

"I came out behind two or three cars after the pit stop and I reckon I would have lost three or four seconds coming in to the pits because I couldn't see where I was going.

"It didn't cost me the race. But it certainly cost me a podium at least."

"It's a very complex thing a race weekend at this level, but we set ourselves high expectations," Whincup said.

Although he didn't win a race for the first event since Perth, Whincup was second highest point scorer last weekend behind Kiwi amphibian Shane van Gisbergen in the VIP Petfoods Commodore.

"We can do a better job. As I have said before I don't mind getting beaten, but I hate losing and not putting in our best performances and not being the best on the day."

Whincup passed Bright after a fierce battle with just laps to go for fifth and an extra nine Championship points. The move backed up his constant insistence that he is a racer rather than an accumulator and that at this stage of the season, with the Pirtek Enduro Cup still to come, he is not thinking about the Championship.

"I am always fighting to the last lap," he said. "I am pushing, pushing for absolutely every position. I am not thinking about the Championship this early on. That would be silly. I just saw an opportunity to grab another spot because that's what it is all about.

"The racing is the fun bit, if you don't do that then you don't have any fun and then its not worth doing. I am always the clown in the wall or the sand trap, but that's okay.

"You win a few races as well and that's what it is all about; winning races, those good times, not circulating and collecting points. That's no fun."