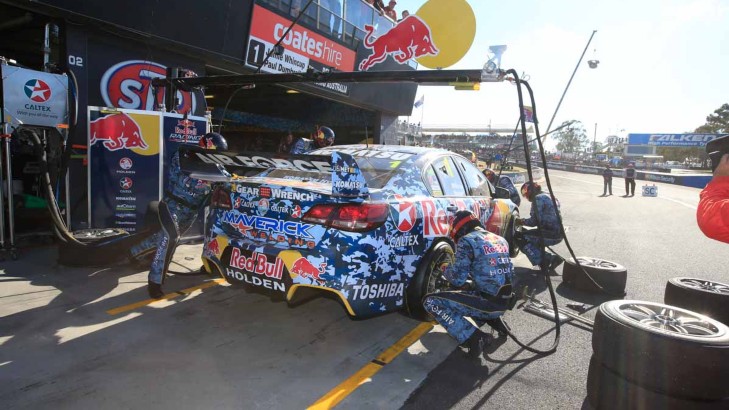 An incredible Supercheap Auto Bathurst 1000 has unfolded at Mount Panorama - Chaz Mostert and Paul Morris are the winners, but there's one question. Why did Jamie Whincup not respond to calls he would run out of fuel if he failed to conserve?

"I think he could hear us," car #1 race engineer David Cauchi told v8supercars.com.au.

"To be fair to him, we thought we had enough fuel to make it. And it turns out that we didn't. We'll have to look it up from our end. We did what we did, there's plenty of things we said we should've, could've, but at the end of the day we decided to run with the strategy and it didn't work for us and that's what happened.

"That's what makes this race so special, because there's so many little things it takes half a kilo, half a litre of fuel that can make or break your day. That's the beautiful Bathurst race."

Whincup was knocking out fast laps even after he'd been told to conserve in the closing stages of the race and did not respond to the radio calls until team boss and his former engineer Mark Dutton had tried to communicate with Whincup.

"When we realised it wasn't going to happen, I was gutted. I honestly don't know what to say. I'm a bit stuck for words at the moment, I'm a bit emotional, sorry," Cauchi said.

"I think that's the most impressive thing - both these cars that were fighting on the last lap were actually starting from p-last. And we had a rough day - we had accidents, we had pit lane penalties, and so to be even in the fight to win at the end I think is pretty special and it would be absolutely unbelievable had we gotten over the line.

"Not to be today, but we've still got a Championship to win.

"Still got the Championship lead, so that's what we've got to start focusing on now - we've got to get over the disappointment of this, and make sure we're smiling come Homebush."

And - how is the Red Bull driver after another near miss at a Bathurst 1000?

"I haven't spoken to him too much yet, but he'll be as gutted as anybody, of course. He puts his heart and soul into this sport and he comes here to win. He comes to every race to win, but this race is special so he'll be absolutely gutted."

Whincup, paired with Paul Dumbrell, recorded fifth in the final results for the day.

In Red Bull Racing Australia's post-race media release, Whincup said: "What a race. We started at the back, got to the front, went to the back and got to the front again but ran out of fuel on the very last lap. We are in the entertainment industry, hopefully it was entertaining for the crowds and I gave it my absolute all like I always do.

"It looks like I didn't manage the fuel like I needed to but I did the best I could, there wasn't much more left to do.

"I knew I was in trouble when we hit the pot earlier than expected, I got a number to stick to and I thought I was doing pretty well but it didn't work out that way.

"I did what I could today and it didn't pay off but we're hoping next time it will."

More to come from Mount Panorama.

Pye: Hit as big as any I've ever had