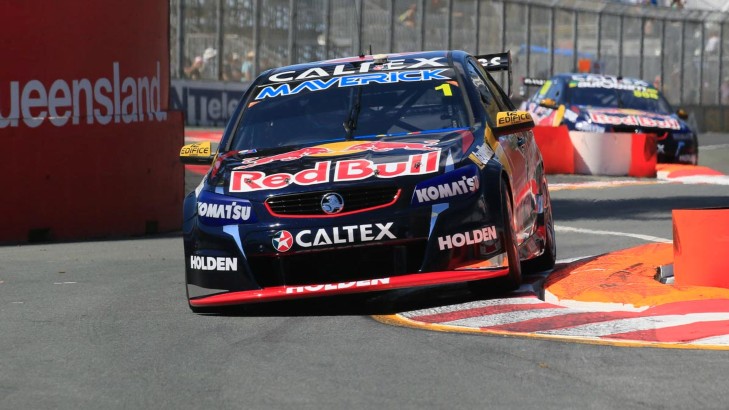 With his championship defence over in all but theory, Jamie Whincup is driving like he stole it this weekend at the Castrol Gold Coast 600 and enjoying it.

That's the verdict from his long-time engineer Mark Dutton, who says the six-time V8 Supercars champion's wild form in the Red Bull Racing Holden Commodore VF is all about attacking a track he loves as fast as he can.

"Let's be honest, we are not really fighting for a championship with that car," Dutton said. "He loves this track and is the first time how ever many years he can come here and go hard.

"But this weekend it's time to race hard and enjoy it in a different way."

Whincup's exuberance has included a spin after taking too much kerb and hitting the wall exiting the turn 2 chicane in Friday morning practice and today's ARMOR ALL Top 10 Shootout lap that teetered on the edge and ended with him dropping him to seventh on the grid after qualifying second.

He grazed the wall several times and then locked the rear brakes heading into turn 11, managing to scramble around the corner only with the cost of 0.8sec.

Dutton said there were no specific set-up reasons that Whincup's shootout lap was so wild.

"I think it was track conditions. No-one was doing as quick as he did in qually. It was interesting one, you saw most cars out there were a little bit taily and things like that. When you overlay it there were sections where he was as quick as or quicker than his qually lap, so he was there or thereabouts," Dutton said.

Dutton played down any chance that Whincup was driving angry after his late-race Bathurst controversy when he chose not to stack behind team-mate Craig Lowndes when called in for a late-race pit stop.

That incident has been covered extensively by the media and as the subject of an in-depth post-race review by the Triple Eight team. Whincup has also spoken in the media about the incident and its coverage.

"I have not read any of the articles and maybe I should," Dutton aid. "I think what's happened is people don't realise you take such a hit. We had such a good car ... and we worked so hard for that weekend and when it doesn't come when your car is so much better than everyone else's, it hurts.

"So of course he is hurting and so are the rest of us. The only good thing is at least the other car (Crag Lowndes and Steve Richards) won."

Dutton said the #1 car was still running behind on set-up as a result of the Friday morning spin and the damage the car incurred.

A suspension arm and a chassis mount were changed before practice two and a rear upright and axle assembly before practice three, then a transaxle was swapped between session three and four to cure a vibration.

"I still have less information than I would have had for myself if we hadn't had an incident yesterday. We will still be competitive, but I would have liked to have had more information," said Dutton.

The challenge now is that co-driver Paul Dumbrell will start the car from seventh place, when no-one has previously managed to win at the Gold Coast from further back than sixth.

"I think we have the speed," said Dutton. "Paul was quickest in the co-driver session yesterday before the car was properly fixed and Jamie did a great job this morning and put us in a great spot. So we will go from there."