Whincup ‘put it all on the line’ on shootout lap

Jamie Whincup has paid tribute to the crew on his #88 Red Bull Ampol Racing entry after he claimed a 90th career pole in Townsville.

Whincup was a class above over one lap on Sunday at the NTI Townsville 500, first pacing qualifying before blitzing the shootout.

Teammate Shane van Gisbergen was his closest rival, albeit over three tenths down.

It was an early taste of revenge following a Saturday of van Gisbergen dominance, both over one lap and in Race 15.

"It was good," an elated Whincup said.

"I put it all on the line like I did yesterday but got a much smoother lap.'

Whincup cut a deflated figure after Saturday's race, which he led until van Gisbergen reclaimed the lead on lap 70.

Van Gisbergen drove away to a seven-second victory over Whincup, who was denied a 13th Townsville win. 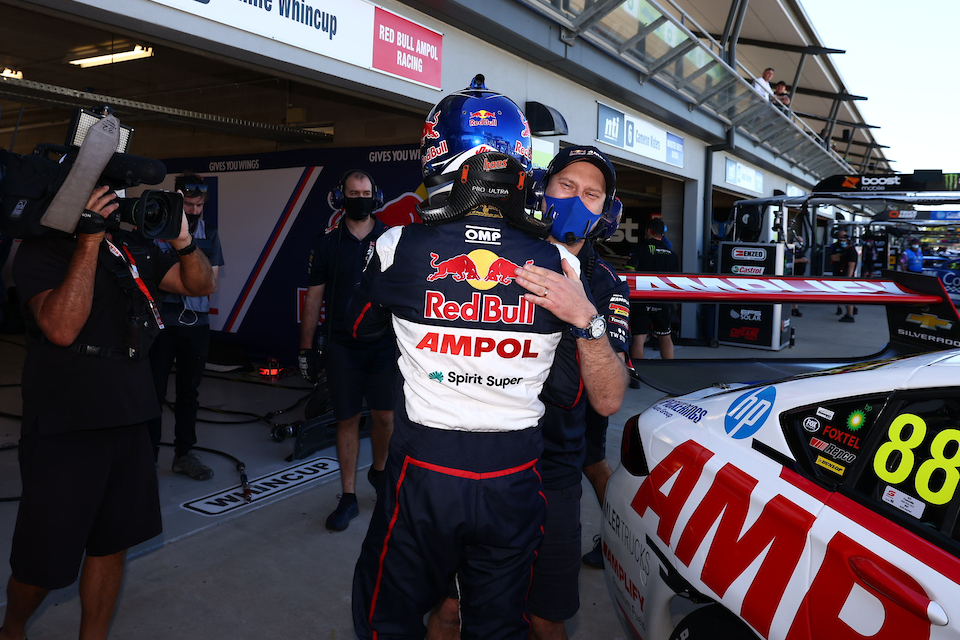 Knowing he had to close the gap to the #97 crew, Whincup and his men got to work to find the one-percenters required to beat van Gisbergen.

Topping qualifying on Sunday morning was a solid start, but van Gisbergen was only 0.0058s down.

Todd Hazelwood loomed as the benchmark, with the Brad Jones Racing driver to launch from third in Race 16.

Hazelwood, second man out in the shootout, dropped in a 1:12.697s, a lap the six subsequent runners failed to topple.

Van Gisbergen demoted Hazelwood, albeit by 0.042s, before Whincup left them all for dead.

It was a key result for Whincup, who heads into Sunday's race desperate to eat into van Gisbergen's 233-point series lead.

"As I said on the in-lap, big credit to the engineers," Whincup continued.

"They probably could have called it safe and run yesterday’s set-up but had a crack and boom, got the cookies for them."