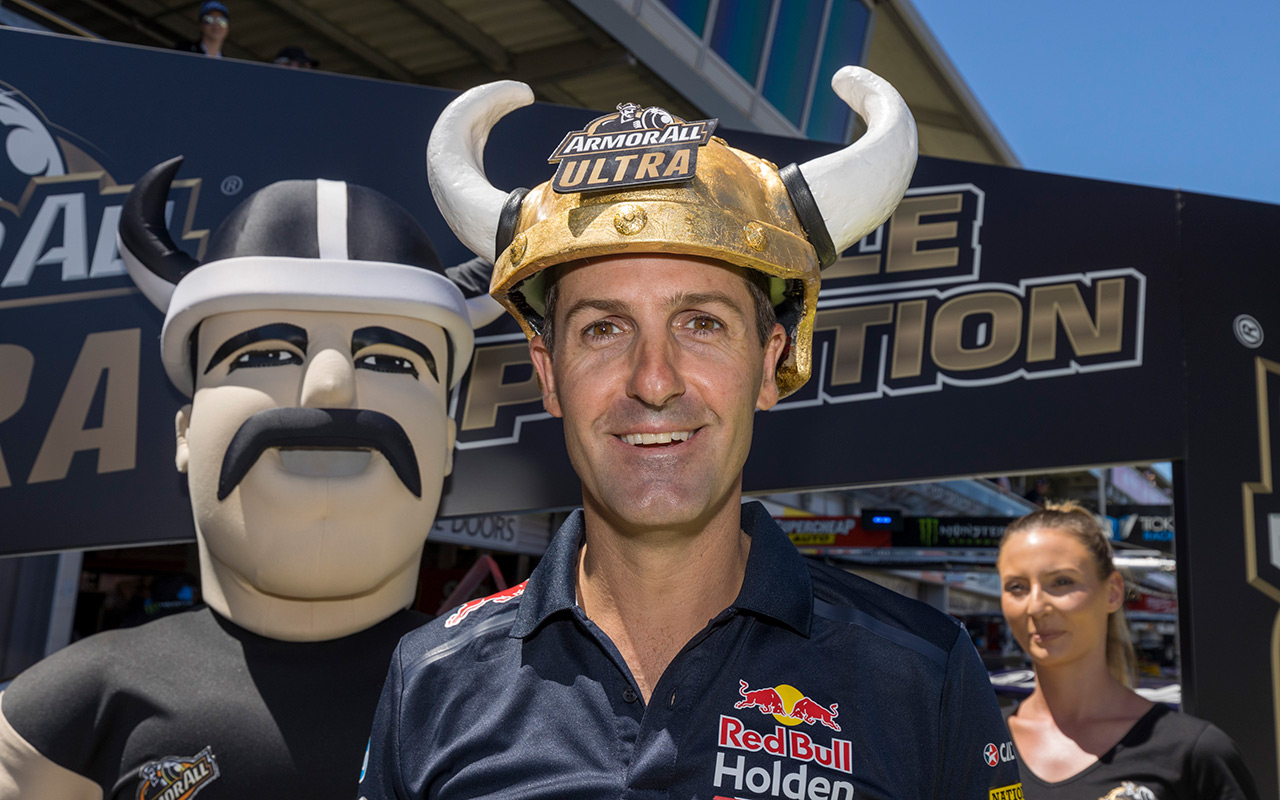 Jamie Whincup has celebrated his Red Bull Holden Racing Team contract extension by clinching the first ARMOR ALL Pole of the 2020 season.

Whincup had only scraped through to the Top 10 Shootout after a spin earlier in a three-part qualifying session but delivered when it mattered in the form of a 1:19.4793.

“It's a good feeling, I don't know if there was a little bit in going out [for the Shootout] with a hot car straight after quali or not,” Whincup said.

“The engineers did a good job, the car felt great, we got the most out of it and very, very happy to be P1.

“It's crazy close, it's 78 laps this afternoon, it's going to be intense but I'm looking forward to it.”

One after the other, rivals tried to knock off the seven-time champion in the Shootout, to no avail.

Smoke began billowing out of the #9 Penrite Racing Holden on his warm-up lap, causing concern of a mechanical failure, but he pressed on with encouragement from engineer Alistair McVean.

Reynolds ended up just 0.0048s off Whincup’s time to secure a spot on the front-row, edging ahead of Will Davison and Chaz Mostert who both continued their Friday form with excellent laps.

“That's so strange… I started my lap and all this smoke came in the cabin and I was like 'I think my thing has shit itself',” said Reynolds moments after completing his lap.

“It had good pace, I'm just guttered I missed out [on pole].”

The last two drivers out in the Shootout, Cameron Waters and Shane van Gisbergen, will share the third row.

Reigning champion Scott McLaughlin battled a “loose as a goose” Mustang to seventh, ahead of Anton De Pasquale, Mark Winterbottom and Nick Percat at the back end of the 10.

A dejected Fabian Coulthard missed the Shootout after being bumped by a late Anton De Pasquale flyer.

Cameron Waters also escaped the drop zone with a blistering effort that took him to the top of Q2, only to be bested by Shane van Gisbergen’s 1:19.4462 soon after.

Q1 pacesetter Andre Heimgartner was slowest of the 13 runners in the middle session, whacking the Turn 8 wall along the way.

“I just turned in a fraction late and as soon as I turned in it understeered and made contact with the wall,” Heimgartner explained.

“It wasn't actually too bad, I don't think it's going to be anything major, but pretty disappointing.

“We had to gain a bit of time there, our cars have been pretty tricky all weekend there and obviously Rick [Kelly] made contact earlier and I've matched that.”

Le Brocq finished the opening segment in the garage with a power steering fluid leak and was unable to make it out for any further runs.

“As I was rolling out of pitlane it started feeling a bit funky. I got to the end, tried to drive out and it was pouring smoke and no steering,” Le Brocq said.

“It’s unfortunate but I’m pretty happy, it’s good to make it through to that Q2 stage.”

Pye will line up 15th after an all-night effort by his DEWALT Racing crew to repair Friday practice damage, sharing the eighth row with Rick Kelly.

James Courtney could only manage 21st in Team Sydney’s debut, while Todd Hazelwood was a disappointing 23rd after running off at the final corner on his last run.

That leaves the grid set as below for the season’s first race, with 78 laps to start from 4:20pm.