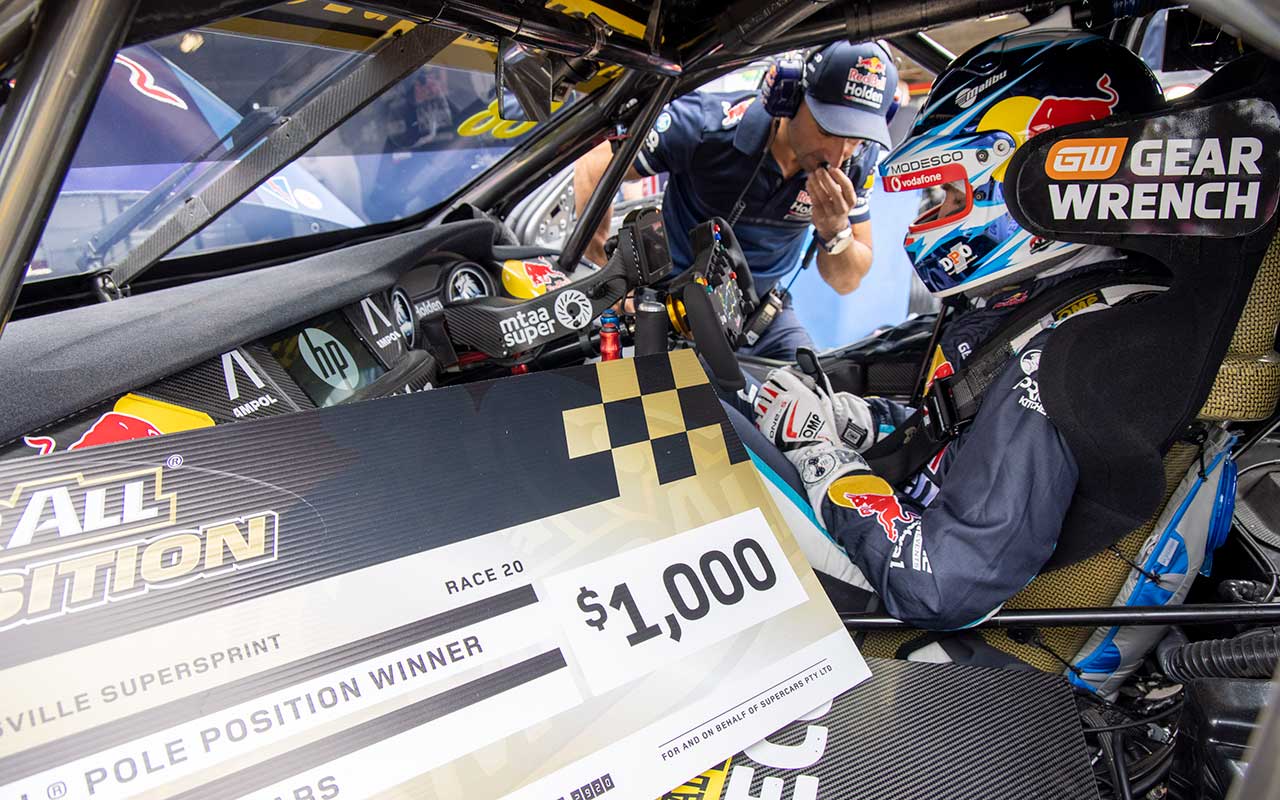 Jamie Whincup and Scott McLaughlin took an ARMOR ALL Pole each ahead of Sunday’s races at the NTI Townsville SuperSprint, following a last-ditch effort from the Ford driver.

The Shell V-Power Racing Mustang then looked set for 12th in the Race 21 qualifying session, before McLaughlin rocketed to the top with a 1:12.1793s just seconds from the end.

“We thought we were there or thereabouts yesterday but came out this morning and the car was sort of nowhere,” said McLaughlin.

“After that we made a change and it was hooked up in that second run so I’m really, really happy. I’m pretty pumped with that one.”

McLaughlin’s lap denied Cameron Waters by 0.0230s, moments after the Tickford Mustang driver had leapt from last to the top.

Waters had not completed a run in the first part of the session, where a sprinkle of rain had many going for an early time but ultimately proved light enough not to impact speed.

Nick Percat had been the best of the initial runners and appeared set for a career-first pole, getting out of his car before seeing Waters and then McLaughlin go faster.

Percat’s time held on for third on the Race 21 grid ahead of Whincup, Todd Hazelwood and David Reynolds, who like Percat had also each run early in the session.

In the earlier Race 20 session, McLaughlin’s 13th place came after setting an initial 1:12.7000s benchmark for the field to chase, before failing to improve on his second run.

Whincup went quickest of all with 1:12.3105s, just 0.1313s ahead of Mostert, with Tickford duo James Courtney and Waters set to share the second row.

“The car was good as it was yesterday and we maximised there,” said Whincup of the Race 20 session, which added to his pole and win from Saturday.

“[In the Race 21 session] it started to rain, so if it dries out it’s generally faster after the rain but if it doesn’t dry out then you’re P20.

“Full respect to [engineer David] Cauchi, he said ‘mate we don’t know what it’s going to do, let’s go out and run early’.

“As it turned out, it dried out and the track was a bit quicker and we dropped down a few spots but all in all, P1 and P4, we’ll take that, it’s a good average.

Penrite Racing’s Reynolds and De Pasquale will make up row three for Race 20 ahead of van Gisbergen.

Jack Le Brocq, Percat and Holdsworth completed the top 10, while Garry Jacobson and Macauley Jones also knocked off McLaughlin and teammate Coulthard, who was 15th.

The first of the afternoon’s two 39-lap races will get underway at 1:05pm local time.