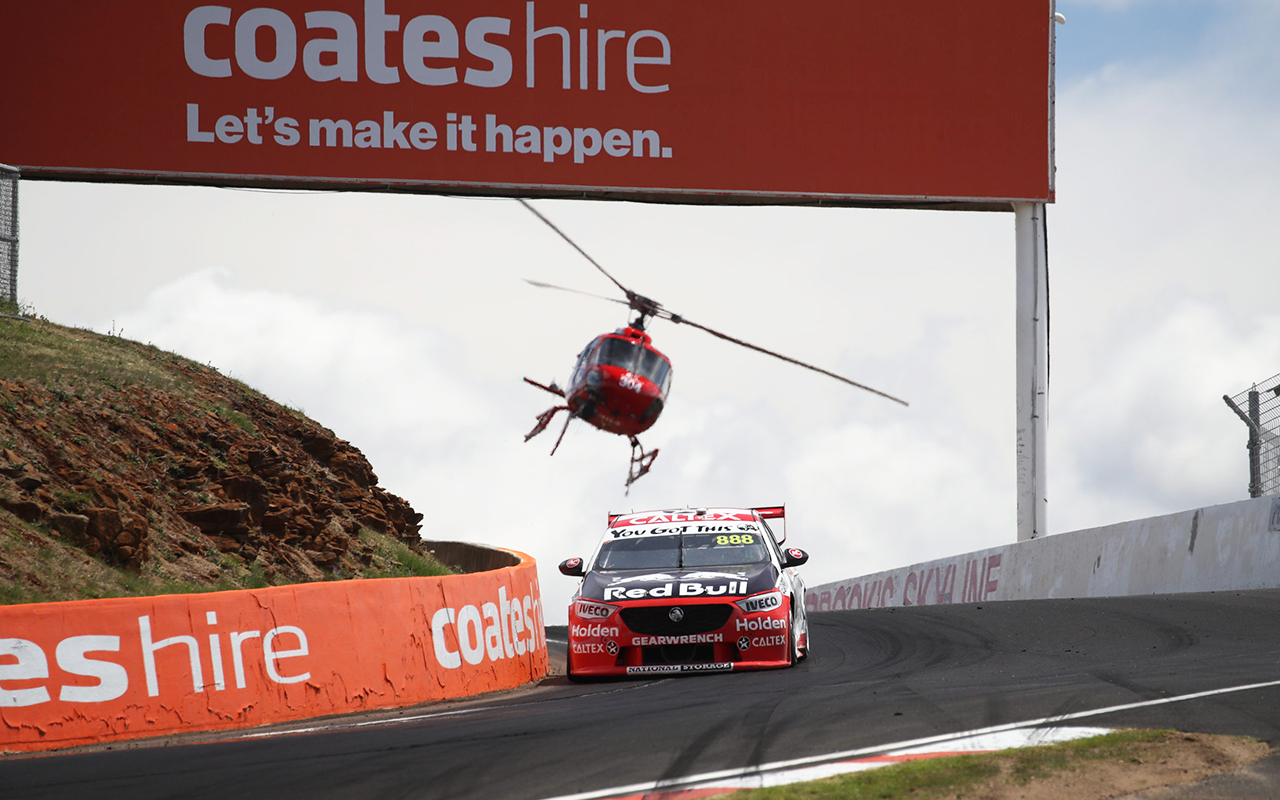 Jamie Whincup and Craig Lowndes hold the effective lead at the halfway point of an enthralling Supercheap Auto Bathurst 1000.

The sister Red Bull Holden Racing Team car is first on track with Garth Tander at the wheel, with Rick Kelly the other car ahead of the lead pack having not yet made their fourth stop.

Chaz Mostert/James Moffat had been ahead of the #888 before Moffat stalled upon leaving the Tickford pit bay on Lap 81, gifting Lowndes the advantage.

“The car is fairly solid at the moment, pace is reasonable. The other two blokes are bloody quick, but that’s what we’ve got at this stage,” Whincup said.

“Hopefully the conditions get better for us and the car comes on, it’s a little bit loose in the rear at the moment.”

Scott McLaughlin’s co-driver Alex Premat also snuck by Moffat, who slotted in ahead of the second Shell V-Power Racing Mustang of Tony D’Alberto and Fabian Coulthard.

Before the pit cycle, Moffat had done a stellar job to hold Whincup and McLaughlin behind.

He had inherited the lead after Mostert passed Premat during a busy third stint whereby the Frenchman had held off Cameron Waters for many laps.

Mostert eventually squeezed by Waters and then forced Premat into an error the following lap under braking at The Chase.

So at Lap 81 of 161, the order read Tander, Kelly, Lowndes, Premat, Moffat, D’Alberto and Waters’ co-driver Michael Caruso, who starred in the opening stint of the race.

Caruso had been just ahead of van Gisbergen before pitting on Lap 79.

The #97’s race very nearly came unstuck after their second stop on Lap 43 as van Gisbergen returned to the track with a loose driver’s door.

The door flapped open and shut before the Kiwi managed to close it while driving one-handed.

“I fiddled around with the latch down the straight and got it hooked up,” he explained.

“I was doing everything I could, I didn’t really want to pit, even if I had to keep holding the door, but they probably wouldn’t have let me do that.”

The race settled down after a chaotic start that had been delayed by 15 minutes due to the Kostecki Brothers Racing wildcard stopping on the formation lap.

Brodie Kostecki parked his #56 Commodore at the start of Conrod Straight after a cool box failure caused him to suffer carbon dioxide poisoning.

The 21-year-old was taken to the medical centre, with his car – which had twice been crashed during practice – towed back to pitlane.

The Kosteckis did make it out in time for Lap 1 after all, with Jake Kostecki now at the wheel, starting from pitlane.

Brodie would later be cleared by medical staff to take part in the race, avoiding the need to promote Jake’s brother Kurt into a sudden co-driving role.

Brodie eventually joined the race on lap 46 after a solid double-stint from his cousin.

There would be more drama once the race finally got underway, Tim Slade crashing out on the opening lap.

Slade found himself on the outside of Scott Pye out of The Cutting, with the Walkinshaw Andretti United Holden bouncing off a kerb and nudging the #14 Brad Jones Racing entry into the wall.

It extends a shocking run of form for Slade, who now is 15 straight races without a top 10 finish as he fights for his Supercars future.

Green flags resumed on Lap 4 and McLaughlin would soon be smashing another Bathurst record.

The next lap saw Nick Percat forced to pit from inside the 10 due to a puncture – an issue that would force James Courtney to make a similarly unscheduled stop 11 laps later.

Reynolds’ co-driver Luke Youlden was in the wars in the Penrite Racing #9, losing time with a number of moments, including a spin at Hell Corner.

Dean Canto, Will Brown, Hinchcliffe and Brodie Kostecki are among others to have run off the track, while Garry Jacobson slid into the tyre barriers at pit entry but escaped any major damage.