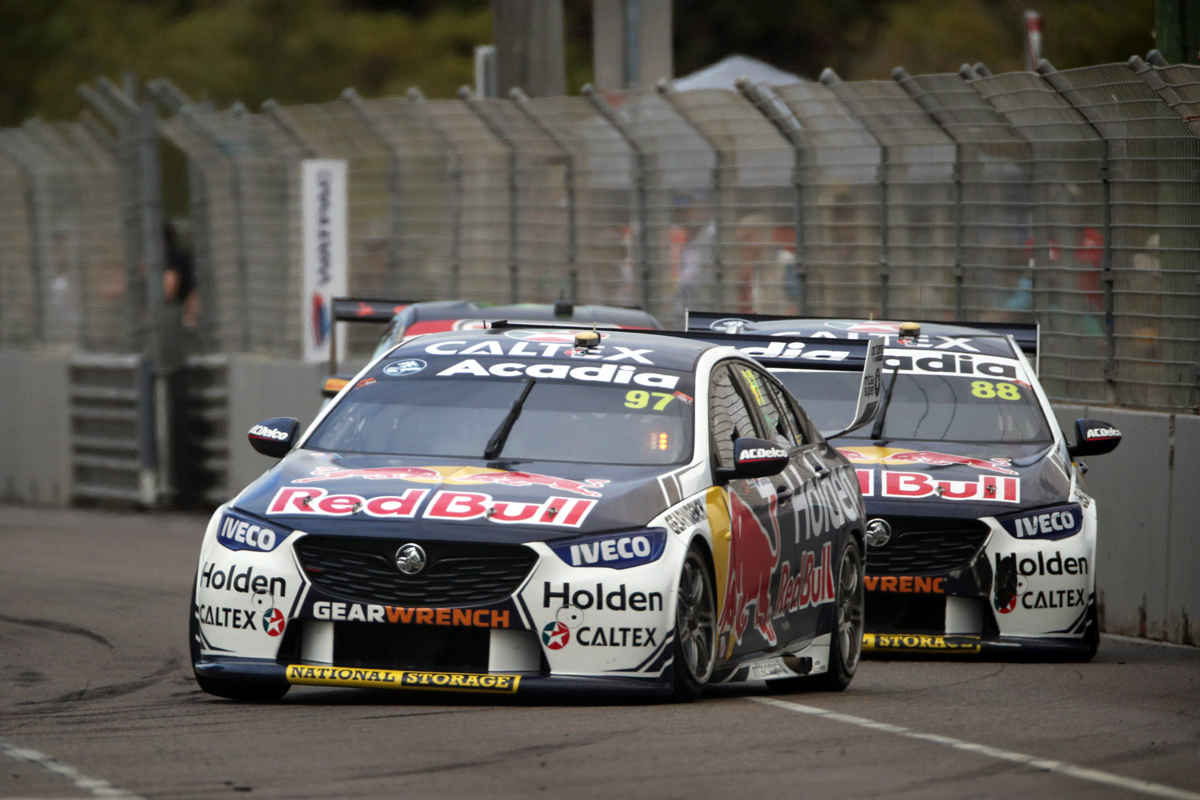 Van Gisbergen and Whincup ran fifth and sixth through the first stint of the 70-lap affair, but the former reported front-end vibration in the early stages.

Whincup was able to help the team understand the problem, having seen van Gisbergen brush the wall at Turn 2 and able to spot that the left-front rim was damaged.

"Shane clipped the wall coming out of Turn 2 on the left and it buckled the rim, the rim was wobbling around all over the place," Whincup said.

"I think he was very lucky not to have suspension damage.

"I was just driving down the straight trying to give it a bit of an inspection to see what was going on to give the team a heads-up for when he came in for the pitstop.

"If you've mangled a wheelnut, you need to be prepared for it at the stop.

"I had the best spot to see it, so debriefed the damage and maybe it helped, maybe it didn't."

Here's the culprit! SVG has proved that whatever vibration he was feeling is not affecting his passing moves 🕺🏻#RedBullHolden #VASC pic.twitter.com/XoJk5BLsFs

From sixth, Whincup opted for an undercut strategy that put him in the lead from the second stint.

He led until lap 50, when winner Scott McLaughlin got past, and went on to finish second.

"We were very aggressive with strategy, which is dangerous, but we pulled it off today," he said.

"The only strategy better than what we did was to have a faster car, which is what happened with Car 17 and why we ran second.

"Unfortunately we haven't made a step forward, but we've made a step sideways, so there might be a bit more fish in this pond we're fishing now.

"I'm much happier doing that than just belting round doing the same thing."

Van Gisbergen's strategy was effectively the opposite, running long before making his second pitstop.

That gave him an 18-lap run to the flag on fresher rubber, in which he rose from seventh to fourth, getting Fabian Coulthard on the last lap.

"In some ways I'm disappointed but happy with the race," he said.

"We didn't get the strategy right, but I had good battles and I was able to fight with people and Jamie got second, so it's pretty exciting.

"But on the other hand, I had a much better car than fourth, so that's why it's exciting, but disappointing because we didn't make the most of it.

"I had a bent rim in the first stint, but it didn't really affect me.

"Then we got caught out running long in the middle stint, with all the people who had taken their second stop with good tyres trying to pass us, so we lost a few seconds there, which cost us a podium."

The Red Bull Holdens remain fifth and sixth in the championship, but with Whincup now ahead based on Saturday's results.