Red Bull Holden Racing Team driver Whincup led the way in a top six covered by less than a tenth, among a group of 10 drivers who will skip the first phase of Sunday’s ARMOR ALL Qualifying session.

Beyond that group, though, points leader McLaughlin, Craig Lowndes, Mark Winterbottom and Coulthard are among the drivers that will have to navigate that opening segment.

Following showers in Perth on Sunday morning, Supercars drivers headed out on wet tyres on a track surface that was drying quickly.

Tim Blanchard and James Golding, though, opted to head straight out on slicks, with Blanchard lapping within half-a-second of Coulthard’s early 1:01.1629s benchmark.

By the time Blanchard went fastest with a 1:00.4175s and then 1:00.1389s, others were following the CoolDrive Commodore’s lead in switching to slicks.

Todd Hazelwood then turned the first sub-60s lap, a 59.9782s eight minutes in, with subsequent improvements flying in rapidly.

To that effect, Nick Percat was more than three seconds quicker three minutes later with a 56.9122s.

Tim Slade joined Brad Jones Racing team-mates Blanchard and Percat in having a stint at the top, before Anton De Pasquale and then McLaughlin moved to the top. 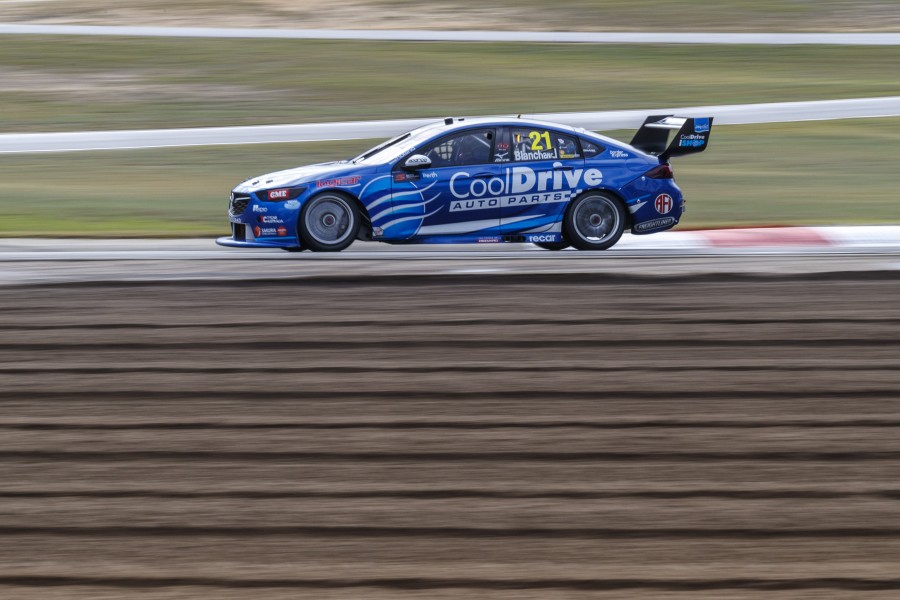 With four minutes remaining, McLaughlin’s 56.6915s was the time to beat, while Red Bull pair Shane van Gisbergen and Whincup were 20th and 26th.

Rick Kelly then found nearly four tenths with a 56.2229s, and pitted as the rest of the field headed out for their final attempts with two minutes left on the clock.

Van Gisbergen and then Whincup vaulted to the top as times broke into the 55s, with the latter’s 55.2686s ultimately unbeaten.

The Fords of Chaz Mostert and Will Davison slotted into second and third, just 0.0429 seconds and 0.0540s behind Whincup, ahead of van Gisbergen.

“It was quite slippery in the wet, it was out of control. We ran new tyres to try and get through and that helped us,” van Gisbergen said. “Today we need to start up front.”

Percat and Slade wound up fifth and sixth, both within 0.08s of top spot, while David Reynolds, Kelly, Andre Heimgartner and top rookie Golding rounded out the top 10.

“It was a great session for us,” Golding said.

“We made a few changes at the end there to make it more for the dry, because obviously it was wet at the start.

“I was a bit worried that we were spending too much time in the garage and we needed to be out there, but in the end we were on the fresh tyres at the right time.”

They all earn a free pass to the second phase of qualifying, while the Shell Fords of Saturday winner McLaughlin and Coulthard were 12th - one spot ahead of Blanchard - and 21st.

“We didn’t run greens, I don’t know whether other people did or not, maybe we got caught out by that,” said McLaughlin.

“But I had a fair bit of push then too. I’m confident we can come through the three runs, but I think we just missed the boat there.

“You always want to be in Q2, but we didn’t run the green set, so we’ve got one up our sleeve.”

Also buried in the order, Lowndes was 17th, two spots ahead of Winterbottom who ended Tickford Racing’s 2018 podium drought on Saturday.

“I just didn’t get a lap. The tyres were good, but I dropped a wheel on the wet line on the exit and lost a heap of time,” said Winterbottom.

“It was a tough session, but it’s a mixed up sort of grid now. Getting through will be tough, but we’ll go again.”

Mobil 1 Boost Mobile Racing fared the worst of all, James Courtney and Scott Pye finishing at the foot of the times.