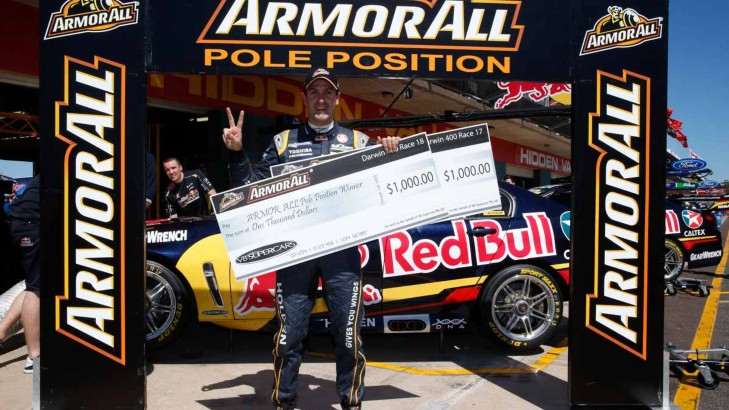 With 57 ARMOR ALL Pole Positions to his name, Jamie Whincup has equaled Peter Brock's record for p1 starts.

And after his dominant run yesterday, heis surely favourite to top qualifying later today and earn the most pole positions in Australian Touring Car/V8 Supercars history.

The Red Bull star is honoured to be associated with the motor racing great, and to surpass so many of the legends of the sport.

"It's a huge deal to me, believe it or not," Whincup told v8supercars.com.au of equaling the late great Brock.

"I don't want to get into the debate, I'm not comparing the past to the present. So many motorsport fans get on the bandwagon with, there's so much more opportunity now, and that is the case - but at the same time the category is competitive as it's ever been. All the cars are pretty much exactly the same, so anyway, there are facts to and fro, I'll stay out of that!

"But to have the most amount of poles, considering I'm still 31 years old is a big achievement.

"Every racing driver loves to drive fast - it's all about getting a big lap out of the car, so to have done that more than anyone else in the sport is a really cool stat and one that I value heaps.

"Brocky was a little bit before my time - but I'm certainly aware of the history of the sport and know what an influential icon he was, so I have a lot of respect without a doubt.

"I'm just doing my job so it's a big deal to me personally to have more pole positions than anyone else and that includes all the greats of the sport - Skaifey (Mark Skaife), Craig (Lowndes) who's still driving, these guys are some of the best out there. Hopefully I can keep adding to the tally."

Whincup, as usual, downplayed his chances for today despite blitzing the field in yesterday's two 100km races at the SKYCITY Triple Crown.

While it will be important to go easy on the Dunlop soft tyres in the 20-minute qualifying session, the five-time champ said it would take guts to have just one shot at a pole lap.

"I think a game person will do one run - I think most will do two," he said.

"I don't think anyone's in a position to back themselves and say, I'll just do one lap on one set of tyres. I'd be surprised if they do and be surprised to see where they end up.

"If someone can do that, they'll have a huge advantage for the race, but I'm not that confident.

"We had a good car on hards but that means nothing on soft tyres. That's a completely different ball game so we'll throw our tyres on and qualify as best we can."

Can Whincup break Brock's record and get one step closer to being the first driver to win the Triple Crown - sweeping all three races - at the Darwin event.