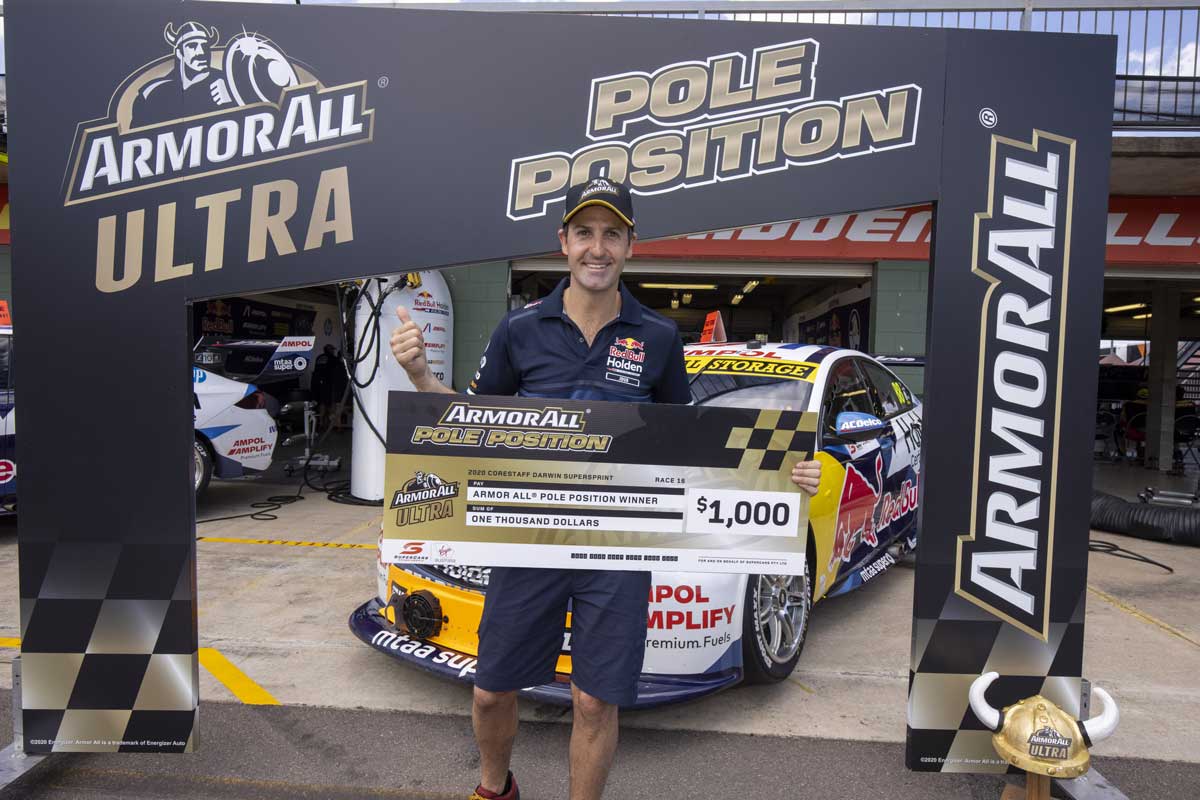 Jamie Whincup has ended Scott McLaughlin’s streak of ARMOR ALL Pole Positions in Darwin, at the CoreStaff Darwin SuperSprint.

McLaughlin scored all three poles at the Hidden Valley circuit last weekend and both in 2019, but fell 0.0633s short of the Red Bull Commodore in today’s Top 15 Shootout.

The following 12 drivers all failed to improve that time, including 11th runner McLaughlin and Q2 pacesetter Mark Winterbottom, who slotted into seventh after clouting the Turn 10 kerb.

"We were genuinely in P13 in [Q2], but we tuned the car up for the Shootout, she was much better, and I'm very happy to get pole," said Whincup.

"The car was very good and I got the most out of it, and maybe we got gifted a tenth or so with the cloud cover.

“But I've been on the other end of that plenty of times, so you take it when it comes."

Anton De Pasquale was sixth, ahead of Team 18 duo Winterbottom and Scott Pye, and Brad Jones Racing’s Nick Percat, who was distracted by a loose helmet air hose on his lap.

Rookie Bryce Fullwood was second in Q2 but fell to 10th in the Shootout, although impressively still ahead of Shane van Gisbergen and Chaz Mostert in 11th and 12th.

The Ford Mustangs of Andre Heimgartner, Fabian Coulthard and Jack Le Brocq filled 13th through 15th – Coulthard the biggest loser in the Shootout after being third in Q2.

David Reynolds was the big scalp in Q2, set to line up 16th after falling short of a Shootout berth.

“I’m a bit disappointed,” he said. “It’s just not turning; it still has a lot of understeer and we can’t quite dial it out.”

The back of the grid is filled by those who failed to progress from Q1; Garry Jacobson, Chris Pither, Todd Hazelwood and Jack Smith.

Hazelwood is still struggling with a lack of straightline speed that has plagued the Brad Jones Racing Commodore since a crash in the corresponding race seven days ago.

“We’re trying to dissect everything; uprights, transaxle, there are so many things we had to change after that incident last week,” he said.

“We tried to rectify it last week for Sunday, tried an engine change during the week… we’re trying to tick everything off the list.”