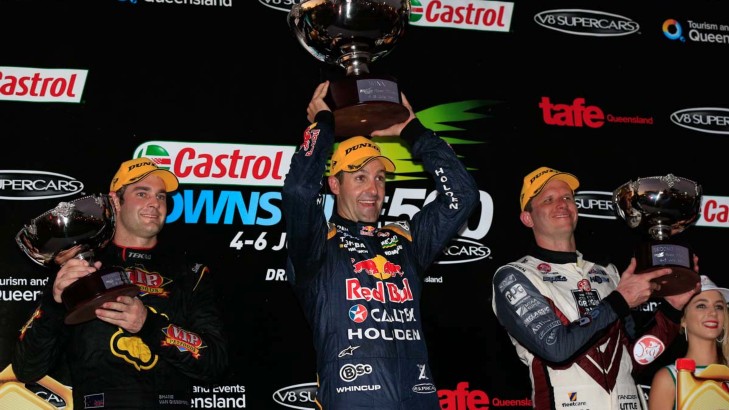 Jamie Whincup is right in the Championship hunt after a solid victory on the streets of North Queensland, ahead of yesterday's winner Garth Tander.

It was Red Bull versus Holden Racing Team, the fierce factory Holden rivals, after the final pit stop - there was a spritely battle between the two, but Whincup managed to secure the lead and sail away to a 3.34 second lead.

Tander gave him a tap from behind as Whincup cemented the lead, to the #1's amusement.

"GT's an old pro - I knew he could play a few games and I could play them back," the Red Bull racer said.

"We certainly did it the hard way not stopping on lap one - it was qualy lap after qualy lap," Whincup said.

"We just haven't had tyre life, we've struggled Sunday afternoons - but today we've picked it up. It means a lot more than just a win."

The defending Champ qualified on the front row for the final, 250km race of the weekend at the Castrol Townsville 500 - Driven by TAFE Queensland.

While the field got away more cleanly than yesterday, a lap one scuffle between Jack Perkins and Dale Wood called out the Pedders Chrysler Safety Car. While many of the front runners decided to pit - FPR and HRT stacking their contenders - Whincup stayed out and opted for a different strategy to tackle the 87 laps ahead of him.

Pit stops played out, some stops selecting to go for the three-stop strategy, including van Gisbergen and TEKNO Autosports.

Whincup has cemented his position second in the Championship chase, with just a 96-point gap between he and Mark Winterbottom.

It was a horror day for Craig Lowndes who has tumbled to sixth in the points after an engine drama made it a long 88 laps, weaving in and out of the pits.

But post-race, he could only praise his teammate, despite finishing 23 and having a post-race investigation of the team's pit stop procedure hanging.

"It's fantastic to see Jamie up on the podium, it's sensational and lifts the team up," Lowndes said.

Winterbottom had an impressive recovery after again qualifying outside the top 10, coming home sixth and maintaining his points lead.

"You salvage what you get and sixth position - we did pretty well with that one."

Others to note include first Nissan Michael Caruso 11, Fabian Coulthard 14, and pole man Jason Bright 17 after a pit lane penalty.

Coulthard has moved up to third in the points, 273 behind the leader, with Shane van Gisbergen up to fourth and Courtney in the top five.

The next V8 Supercars event is the Coates Hire Ipswich 400 from August 1-3.

Jamie Whincup  ›
15' Red Bull Racing Australia ›
15' Holden Racing Team ›
2014 Castrol Townsville 500 – Driven by TAFE Queensland  ›
Stay In The Know
Sign up to the Virgin Australia Supercars Championship Newsletter
We use cookies to ensure that we give you the best experience on our website. If you continue to use this site we will assume that you are happy with it.Ok