What’s Ahead For Ingall? 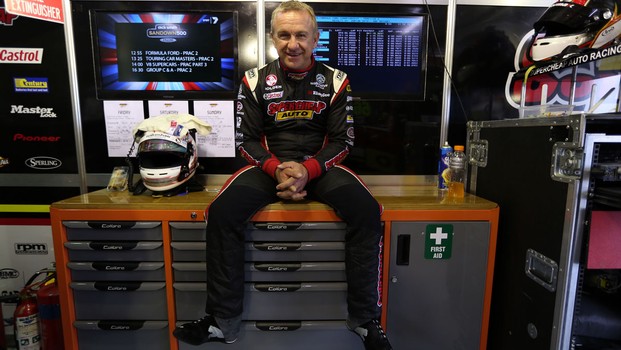 The 47-year-old has signed a one-year agreement to drive with Walkinshaw Racing next season, backed by long-time personal sponsor Supercheap Auto which has supported Ingall since 2008.

“All good things must come to an end,” says Ingall.

“The introduction of Car of the Future gives me the opportunity to go out the way I have always wanted – on my terms.”

Next year will be his 18th full-time V8 season, making him the most capped driver in Australian Touring Car Championship/V8 Supercars Championship history when he makes his 226th event start (scheduled for Townsville in July), surpassing current record-holder, John Bowe.

Ingall’s last full-time season coincides with the first year in a new era for the series that will see two new manufacturers on the grid with V8’s Car of the Future (COTF) chassis.

“COTF is a whole new ballgame for V8s and it will open up the competition – you won’t see the domination by just two teams like we’ve seen this year,” says Ingall, who made his ATCC/V8SC debut at Eastern Creek driving for Larry Perkins in 1996.

“Experience and a cool head will count for a lot and I’ve got both those on my side.”

Ingall said he would not swap his career to be able to start over today.

“The era that I’ve been through with Brock, Johnson, Perkins, Bowe, all the real greats of the sport, through to today’s champions like Lowndes, Ambrose, Tander, Courtney and Whincup – I’ve had the best of both worlds and I wouldn’t swap it for anything.”

Ingall said he was most proud that he was still competitive in what is considered a young man’s game.

“It’s fantastic to have been in V8s for so long, almost since its inception. More importantly, I’m very proud that I am still competitive.

“I can hold my head up high and say that if I wasn’t competitive, and I didn’t believe I could win races, I wouldn’t still be driving.”

While he had a distinguished junior open wheeler career in Australia and Europe, Ingall was a virtual unknown when he won Bathurst with Larry Perkins in 1995 in their famous ‘last to first’ triumph.

His performance earned Ingall a fulltime V8 drive the following year with Perkins’ famous Castrol Holden team and the pair grabbed a second Bathurst crown together in 1997.

Ingall finished runner-up in the championship three times with Castrol Perkins Racing in the following seasons, before he made the switch to Ford’s Stone Brothers Racing in 2003.

After his fourth runner-up championship finish in 2004, Ingall finally claimed the ultimate prize when he won the 2005 V8 Supercars Championship.

In 2008, Ingall made his much-publicised return to Holden with Queensland-based Paul Morris Motorsports, at the same time beginning what has become an extremely successful partnership with leading automotive retail chain, Supercheap Auto.

After four seasons at PMM that produced a number of race podiums and two ninth place championship results, Ingall and Supercheap Auto switched to Melbourne-based Walkinshaw Racing this year.

In his 17 full-time V8 Supercars seasons, Ingall has earned a remarkable 13 top 10 points finishes, while he has 15 top 10 finishes in Australia’s Great Race, the Supercheap Auto Bathurst 1000, including ninth this year.

For more on Russell Ingall and Supercheap Auto Racing: www.supercheapautoracing.com.au

14/12/2012
Stay In The Know
Sign up to the Virgin Australia Supercars Championship Newsletter
We use cookies to ensure that we give you the best experience on our website. If you continue to use this site we will assume that you are happy with it.Ok