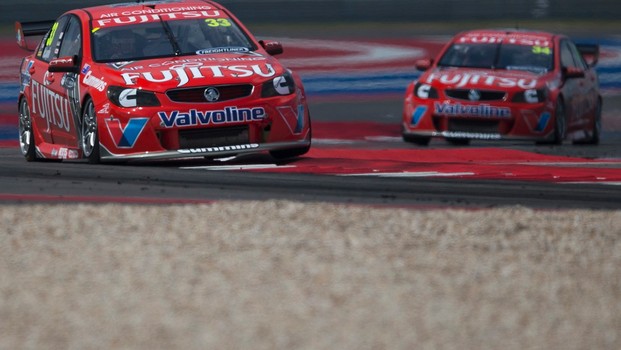 There’s plentyof talk about the major announcement of Volvo Car Australia joing V8 Supercars with Garry Rogers Motorsport in 2014. But at this point the 2013 V8 Supercars calendar isbarely halfway through – there are still 16 races for the team to contestin its current Holden Commodores.

How will thefocus on the new Volvos affect the team’s program this year? And what willhappen to the Commodores once GRM makes the switch? Team owner Garry Rogersspoke to v8supercars.com.au.

“It won’timpact,” Rogers said of the Volvo development on this season. But he didn’twant to get ahead of himself.

“If you have acouple of crashes and things don’t go your way, it will impact us, because thenwe’ll have to try and move our workforce around a bit.

“But barringthat, we’ve got our business plan in place financially and workforce-wise,catering for the extra work we’re going to have building these cars.

“If something left of field comes to play, weare going to have to deal with it as best as we can at the time.

“That’s wherepoliticians go wrong – they have this beautiful long range plan and thensomeone changes the plan and what do we do now? My view is we deal with it, ifwe have to.

“We have somegood resources and other people that we’ve worked with over many, many years;if we need to pull on some extra help, I’m sure we’ll be able to do that.”

Rogersadmitted at first he wasn’t the biggest fan of the Car of the Future concept,but agreed it was the most impacting change he’d seen during his 50 years inAustralian Touring Cars.

In fact theCotF model is what has given him the opportunity to become a factory team (see below illustration of what a GRM Volvo could look like– illustration by Scott Yorston).

“I was a bitof a critic of the Car of the Future because I saw it as a big cost,” Rogers said.

“We could’vedone it without having to change everything – but clearly you’ve gotNissan; Mercedes-Benz; you’ve now got Volvo; and Ford and Holden are stillthere.

“There will beothers (that) come along – and that’s what people want to see.

“We’ve got adifferent population today … at the supermarket 30 years ago, the car park wasfull of Fords and Holdens. But today there’s Hondas, Peugeots, whatever.

“If theyhadn’t done it (CotF) it certainly wouldn’t have given us our opportunity… Ithink it’s a big plus and certainly heading in the right direction.”

The only carRogers has kept in his racing career is the team’s 2000 Bathurst winner, theHolden Commodore VT Garth Tander and Jason Bargwanna drove to victory 13 yearsago.

“I’ve neverkept anything because you’ve always had to sell one car to get your next car,”Rogers explained.

But he said hemay end up keeping one of this year’s two cars. “It’d be nice when I’m on myold rocking chair, sitting and thinking that was the end of that era – andwe’ll probably sell the other one.”

Rogers described sport as the most emotional business in the world. “But it’s how you managethe downs and enjoy the goods – and make sure everyone in the team does that – and you’ll always come out in front.”

Alexandre Prémat  ›
2013 Sucrogen Townsville 400  ›
Stay In The Know
Sign up to the Virgin Australia Supercars Championship Newsletter
We use cookies to ensure that we give you the best experience on our website. If you continue to use this site we will assume that you are happy with it.Ok