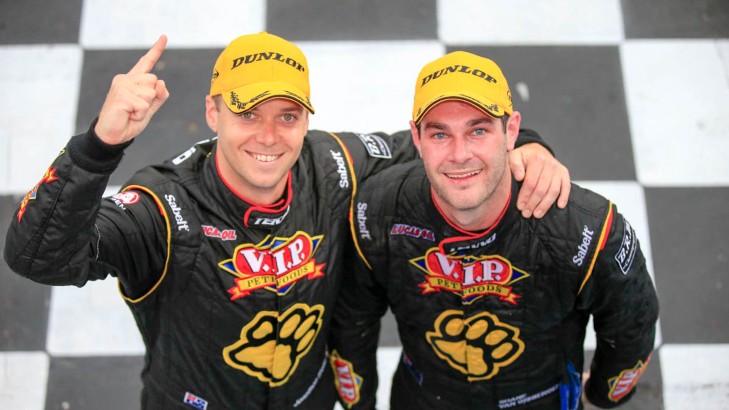 Tekno Autosports owner Jonathan Webb is confident of both his team's prospects in the 2015 Pirtek Enduro Cup and finding the right driver to take the place of Shane van Gisbergen for 2016.

Webb returns to the cockpit of the Team Darrell Lea STIX Holden Commodore VF to co-drive with van Gisbergen in the three-event PEC, which kicks off this weekend with the Wilson Security Sandown 500.

But at the end of the season, van Gisbergen will depart Tekno for Triple Eight Race Engineering where he will join Red Bull Racing Australia alongside Jamie Whincup.

"There are a handful of guys out there we are talking to and I think any of the options we have got on the table at the moment will lead us in a positive direction for next year," Webb told v8supercars.com.au.

He said he was confident the current sponsorship group led by Darrell Lea and Lucas Oils was onboard for 2016 although he added it was important to post strong results through the PEC to reinforce the team's strength.

"There is only so much you can do but try and head things in the right direction, try and put a good show on track, to try and show the sponsors and everyone else we are talking to at the moment that we are still a strong team, Tekno is still a strong group. We are growing stronger all the time.

"All the major partners are enjoying where we are going and what we are doing as a group so hopefully they roll over and really it's just a matter of kicking Shane out the door at the end of the year and finding someone else to steer the car."

While van Gisbergen's results haven't been as strong as 2014, Webb says the team is gradually honing in on the right direction for the team's Triple Eight Commodore.

"We probably have had as much speed as we had last year but not enough to win us races this year. It's pretty obvious the PRA (Prodrive Racing Australia) boys have found something in the off season and come out strong.

"We are obviously working hard with Triple Eight to try and move forward as a group and I think we are moving forward slowly. But it is not going to happen overnight, there is only so much you can do."

Van Gisbergen and Webb were stars of the 2014 Pirtek Enduro Cup, finishing sixth at Sandown, missing out on the win in the Supercheap Auto Bathurst 1000 in heart-breaking circumstances and then fighting back to go 1-5 in the Castrol Edge Gold Coast 600.

Those results were important as van Gisbergen drove up the points ladder to eventually finish second behind Whincup.

This year he is lagging in ninth in the championship, 553 points behind championship leader Mark Winterbottom in the PRA Pepsi-Max Ford Falcon FG X.

"With the enduros coming I think the car is heading the right direction and is better than it was a couple of rounds ago," Webb confirmed.

"Hopefully we can post some strong results at Sandown, Bathurst, Gold Coast like we did last year and get Shane up there in the back half of the year."

Webb confirmed comments made by van Gisbergen about wanting to diverge the car more from the Triple Eight set-up. He says it's a philosophy the team has always followed to some degree.

"It's always good to have them as a back-up, but in a lot of cases Shane is just not that happy with that car that we are presenting him. If it rolls in with something similar to where Triple Eight are heading and he doesn't like it then there is no use persisting with it.

"We are smart enough with our own crew. We have (team manager) Steve Hallam and (engineer Dr) Geoff Slater who are extremely good at what they do and Shane understands the car extremely well.

"So we are confident enough that if we need to do it we can venture off in our way."

"A lot of the time we have been as quick if not quicker than the Red Bull cars and that is not necessarily by following them."

While Webb played down any special desire for Bathurst revenge because of the late race mechanical drama that took Tekno out of the lead of the race in 2014, he did admit its impact on him.

"The only reason my mind goes back to it is to try and make sure what happened there doesn't happen again," said Webb. "It wouldn't be the great race if it was easy.

"I understand the challenges of it. It was probably the most heartbreaking moment in my motor racing career, there is no denying it."